Movie Night seems to have been a bit quiet recently, so to get things going again I'm nominating the single finest science fiction film ever made as our March Movie night film. That's right people, we're watching Starship Troopers! All are welcome to join in on March 18th at 11pm GMT (7pm EDT)

The more people that come to the chatroom, the merrier it'll be and remember,

Movie night was a great success

Oh I missed the movie?

We also had no less than 9 lurkers which brings the grand total to nearly 15 viewers!

Is there really this much public kissing in high school? I'm so glad I was homeschooled

and The Dark Lord for

The winner of the 'Captain Obvious' prize goes to Himarm for

Ladies love a man in uniform 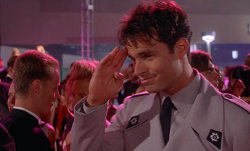 Honourable mention goes to Edlothiad for

What did we learn?

Historically there seems to be little benefit in allowing the community to choose over simply announcing what film is being shown.

Placing it on the main board seems to have attracted no less than six users who've never come into chat before, one of whom then contributed to the event. The vote-count seem to have largely reflected the number of participants.

Only two people "registered" for the event.

At least three of the contributors were watching a version that was streaming from youtube rather than having to download their own copy.

Placing it on a weekend evening appears to have been more effective than making it mid-week, something we tried last year with very limited success.

17
April Movie Night Special - It's Ladies' Night!
25
What is a Movie Night, really?