Why was this answer left locked open?

This heavily downvoted and mildly offensive answer was initially deleted by myself and two other high-reputation users. It was then subject to a meta discussion by the OP who felt that it had been inappropriately deleted. A moderator then undeleted it. It was then deleted (again), at which point a moderator stepped in to lock it open pending meta discussion.

The discussion has now finished. My answer to the OP's meta question (in which I explain why it should have been deleted) is heavily upvoted (+18). The answer the moderator gave (explaining their decision to undelete said answer) is heavily downvoted (-8).

The community have expressed their view clearly. Why then, was the answer left locked open?

We were waiting for community consensus regarding political discussions in general.

Shortly after the community started discussing the answer in question on meta, a new meta question was posted asking whether or not political discussions were generally permissible on this site. Based on the voting on that question, the community has established a consensus that in general, political discussions are permissible if necessary for the analysis of a SFF work: 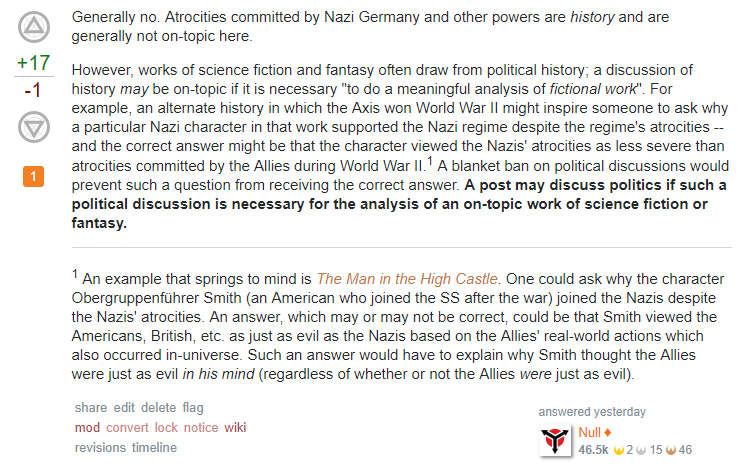 The question that was answered ("If Dumbledore could take on Grindelwald, why didn't he take on Hitler?") certainly invites a political discussion since Dumbledore would presumably fight against Hitler if he objected to Hitler's politics and/or agreed with the Allies'. The answer as originally posted implied that the Allies (specifically British Prime Minister Winston Churchill) were actually as evil as Hitler, which is an opinion that does not belong in an answer. However, based on community consensus it is permissible to say that Dumbledore the character thought Churchill was as evil as Hitler (much like the Obergruppenführer Smith example I gave). The answer in question could simply have been edited to make it clear that Dumbledore the character thought Churchill was evil (whether or not that assertion is actually supported by Harry Potter canon is another matter).

But what about the community's consensus regarding the particular post?

There are indications that the community's desire to delete the answer in question is motivated by dislike of the user who posted it at least as much as (if not more than) the content of the post itself -- moderators had to remind the community to vote for the post rather than not the user (repeatedly). Moderators cannot allow users to override the community's policies simply because they don't like a certain user -- that is a situation which requires the "human exception handling" moderators are elected to do.

The moderator team also observed that the discussion to delete the answer in question was so highly charged and emotional that some users abused their privileges over it. Rand's answer explaining why he undeleted and locked the answer in question received a "rude or abusive" flag as well as two delete votes. Voting to delete a post which answers the question but which one disagrees with is precisely what Rand was explaining not to do in the first place (that's what downvotes are for). Such a highly emotional discussion is not conducive to achieving consensus based on rational arguments, and the possibility of users abusing their privileges is again a situation which requires "human exception handling" by moderators.

The answer has been edited to clarify that only the character in question (Dumbledore) might have thought Churchill was as evil as Hitler. Since it is not my answer, however, I cannot correct its other deficiencies (namely, a lack of evidence that the character actually thought as is claimed). The answer has been unlocked and deleted so that the answerer can attempt to add evidence for his claims. If the answerer can do this then the post can be undeleted per the aforementioned general policy on political analysis of SFF works.

Not the answer you're looking for? Browse other questions tagged discussion moderation deleted-answers locked-posts .

22
Is Science Fiction and Fantasy SE the proper place to debate the severity of Nazi Germany's atrocities?
-15
Why was my answer deleted?

0
Should moderators wait till community made its opinion fully known before closing?
13
When and why was the Bombadil question deleted?
5
When is it acceptable to undelete another user's post?
10
Why was this answer about Picard becoming an admiral deleted?
4
Follow-up to Deleted Questions and Answers
17
Is "Because it's fiction" rude?
22
Is Science Fiction and Fantasy SE the proper place to debate the severity of Nazi Germany's atrocities?
36
Should we have a policy on questions about adult topics in SFF?
2
Why was this Star Trek and slavery question locked?