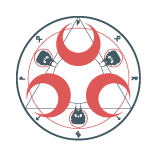 What is this? Should I be able to recognize it, or elements of it? I'm not half-bad at the science fiction and fantasy trivia thing, and this is just driving me nuts.

Scrolling back in time in the design tag here on meta will find you lots of information about the design and the logo. The question Design for Science Fiction & Fantasy incudes an explanation of the logo, which was designed for the site, and some of the thoughts behind it.

The logo is an original creation, but it may be inspired from middle icon of this image:

I discovered this accidentally on Wikipedia pages of Weapon of mass destruction and Nuclear weapons testing. In the image, it appears along with nuke (denotes radioactivity) and danger (denotes toxicity) symbols.

The symbol has unicode of U+2623 and is used to denote Biohazard.

Looks like designer of the logo used something from this to his/her creativity juice. But, its just a guess. Only designer can answer this.

34
What problems does answering a question on this site solve?
53
Design for Science Fiction & Fantasy
18
What does "canon" mean?
5
What is the Fantasy font?
12
'Fantasy' font too thin, detail getting lost
9
Is it bad practice to ask a story ID question for something you managed to find just to mark it as a duplicate of another existing question?

// TODO sg: TMP solution until we are confident in our current implementation of async imports // once we are, we can move the if into the js entry file and dynamically load the mark obsolete module