What's with the time travelling robots?

I often see comments like "Oh no, time travelling robots again" on story identification questions. Why? What's the history behind that? Why is it an issue?

Tried to search, but haven't found anything definitive, except this confirmation that it is indeed an issue!
So, what is the issue?

https://scifi.stackexchange.com/users/5404/rondo - Look at the first revision of pretty much all of his questions. You don't have enough rep to see the numerous deleted questions he has which all riff on that same theme.

It's one of our first meme, inspired by a local troll : Rondo.

This user appeared on day asking of list of movies about time traveling robots. His post got closed pretty fast because questions calling for a list of works are off topic as per our FAQ, but he came back with variant of the same question until he got suspended.

Since that, he keep pooping up and ask questions, sometime even a legit one. First, he waited until his suspension end. But since his suspension was increasingly longer, he started using a new account each time, often using an anagram of Rondo. This is annoying because moderators have to manually merge those account. But we are getting used to him as he is easy to spot because he always add his signature : 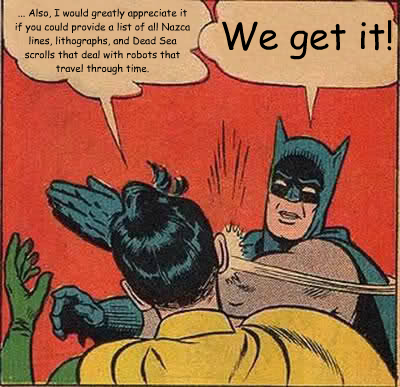 Not the answer you're looking for? Browse other questions tagged discussion question-quality .

74
The many memes of SFF.SE

30
What questions are on-topic, and what questions are off-topic?
16
Consensus on Story Identification titles?
6
Tag for printed interactive fiction books (gamebooks, choose your own adventure books)
14
Adding source link to [story-identification] answers: not a good edit?
12
Should I flag "Why all the Downvotes" comments as obsolete?
14
Why is fandom information treated as if it weren't on topic?
12
Should we admit that story-identification breaks tagging conventions and make new guidelines?
18
We have more than 1,200 unresolved [story-identification] questions >3 months old. Is that a problem?
25
What's it like being a Science Fiction & Fantasy moderator?