Recently there have been a couple of questions about Super Mario Bros on the site.

To me this seems like it might be on-topic on Movies and TV (if referring to the Movie) or on Arqade (if asking about the game).

Is Super Mario Bros on topic on Sci-Fi and Fantasy SE?

Yes, Mario is on topic.

Plot, Man fights a dragon to save a princess, can shoot fireballs after eating a flower. 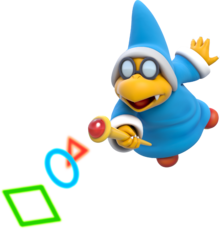 Yes, Super Mario Brothers is on-topic. The other answers cover the "why" nicely.

As per previously discussed policy. Can I ask a question about video game based scifi/fantasy?

Questions should be limited to the SFF nature of the game. Question regarding game design, mechanics, or other such things would be off-topic.

I did a little googling after the comment responses to the question and found some pages that help to answer this question.

At first glance, it seems pretty straightforward that the Super Mario Brothers games are a fantasy series. They take place in a fantastic world with dragons, princesses, and magic mushrooms. The RPGs in the series have all the typical role-playing elements of a fantasy game. But when you look at the entire franchise, particularly the Super Mario Galaxy games, it seems almost certain that the game is science fiction, or at the least, science fantasy.

Either way this article says that Super Mario is on topic here.

This forum seems to come to a consensus that it is Fantasy:

Fantasy/action. The princesses and turtle people root it in the fantasy topic, whilst action is a broad enough genre to easily envelop most platformers.

IMDB classifies the movie as a Fantasy or Sci Fi movie:

33
Can I ask a question about video game based scifi/fantasy?
11
Do we have to ask if all these works are on-topic or not?
5
Are video games out of scope?

4
Should Person of Interest be on-topic?
17
What type of "behind the scenes" questions are on-topic?
7
Is this 'new releases in SF&F' question on topic?
11
Do we have to ask if all these works are on-topic or not?
11
What to do with the [author-identification] tag?
15
Is the Joker movie on-topic here?
5
What should the [video-games] tag cover?