I declined this flag. Others have linked to various SciFi Meta threads on this issue, and I will admit that many of them suggest that they should be flagged and deleted.

I declined it in part because you flagged it as "too chatty" despite the fact that it was the only comment on that post; however, in researching comment flag directives here and on Meta.SE it seems that "too chatty" is indeed the recommended flag type to raise (personally, I think "not constructive" makes more sense, especially when there's only one comment).

I also declined it in part because it was from the OP. Yes, the OP had accepted the answer but I see no harm in a friendly thank you comment -- especially when, again, it is the only comment on the post.

Finally, I declined it in part because this site is not particularly strict about comments (as others have mentioned, e.g., here). Other SE sites are more strict about comments but even Meta.SE has conflicting opinions about "thanks" and "+1" comments. For example, an old question about +1 comments has an answer which favors a lax policy. The answer from Jeff Atwood suggests that such comments should be deleted in part because

...which is not true in this case (I guess this was an older way of handling flags) since you raised a moderator flag.

Another Meta.SE question suggests getting rid of the "too chatty" flag reason because such flags have a tendency to "eradicate" encouragement and kindness from the community, and are noise for moderators:

Do we need to bug moderators because someone added a "Thanks! This worked for me!" comment to an answer? I'd hate to think we were expected to eradicate all encouragement or kind words from a post. Kinda not good for the community.

The answer to that question disagrees with the proposal but says this about "chatty" comments:

Having “chatty” comments hurts because they impede the visibility of future, more useful comment.

Again, that's not true in this case (since there was only one comment on the post) and that's part of the reason I declined your flag.

Yet another Meta.SE answer suggests that "thanks" comments are okay as long as they aren't distracting (which this one wasn't):

You shouldn't feel obligated to flag them when they are not distracting from anything else. When it distracts from other comments (especially if other comments are hidden as a result or take up more than a small fraction of the height of a page), I think they should be flagged. I'm not saying they need to be flagged whenever there are n or more other comments. This is subjective, there probably does not need to be a rule for this, and everyone can use their own judgment.

Personally, I see no harm in "thanks" comments (especially from the OP) as long as they aren't hiding more useful comments. Nonetheless, after doing this research about comment policies here and across the network, I have deleted the comment you flagged. Since the community seems to think such comments warrant a moderator's attention I will delete them in the future.

As an aside, I wonder why you didn't flag any of the comments on the question post. All of them are obsolete and distracting: 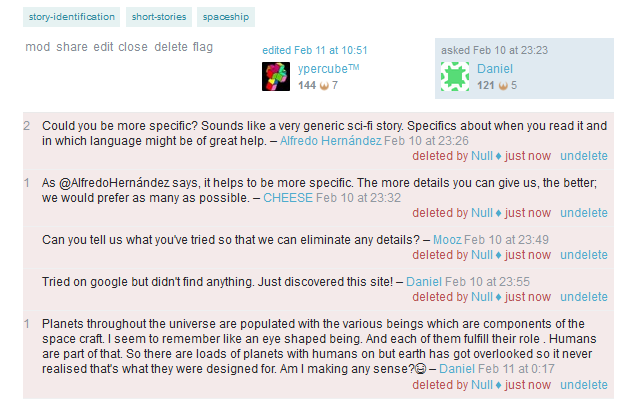 18
Why the info says not to use comments for saying "thanks" when it seems to be appreciated to do so?