Was I right to reject this edit?

Well, I hit the 2000 rep-mark and up until then I was wondering, what exactly does 2000 rep get you? Well I found out when this review landed in my lap;

I rejected the edit as it did not seem to contribute to the answer.

Was I right to do so, and what guidelines should I be following to make these judgements?

I would say you made a good choice. At least one other user (Wad Cheber) agreed with your assessment, as do I.

I don't believe there's any specific guidance laid out anywhere, but the edit rejection reasons give you some clues: 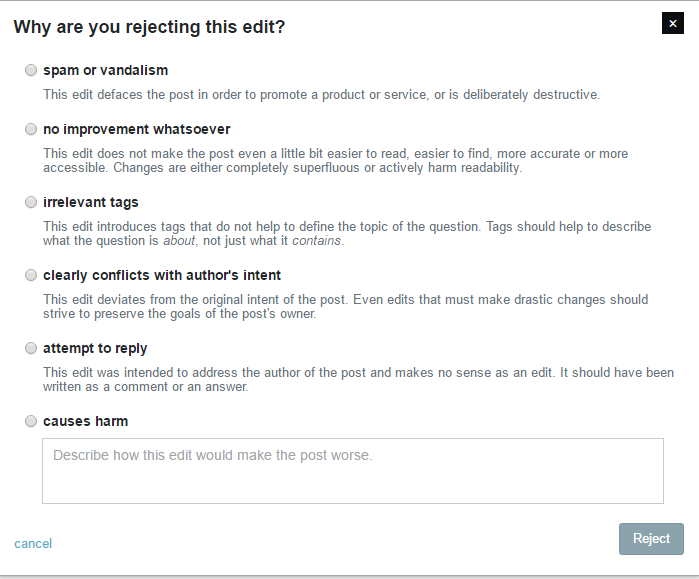 As you can perhaps tell, most of these involve judgement calls to some degree. As you gain more experience reviewing edits, you'll develop an intuition about what does and does not make a good edit.

If I had to give you some specific advice, it would be the following:

You were absolutely right to reject this edit. The addition was basically a commentary and pretty darned rude to boot.

[although one could argue that "high education" and "high capital" aren't exactly the first things that come to mind when someone mentions America].

The reason for your rejection is personal preference, but I'd class it as vandalism as it might confuse readers into thinking that this was the OP's opinion, rather than something that had been added later.

The official guidelines are here; https://scifi.stackexchange.com/help/privileges/edit but honestly, as long as you use common sense, you're always going to be OK.

22
Can we please not change American to British English and vice-versa?
10
Is it acceptable to substantially add text to a post when editing?

13
What happened to that guy that was going to nag people into writing blog posts?
10
How should I be indicating a question is, by its very asking, a spoiler?
15
How should I review First Posts on topics I am completely unfamiliar with?
8
Rejection of story-identification edit that adds references demonstrating the correctness of the answer
0
What's wrong with this title construction?
8
Is there an explanation of duties for each milestone?
9
Was this edit appropriate?
8
Was I right to roll this edit back?
15
Suggested edit to explicitly address a naming discrepancy. Why was it rejected?