How well does Inception fit into the Sci-Fi Genre?

I'm trying to work out why Inception fits into the Sci-Fi genre. What elements make it 'on-topic' on a site devoted to science fiction and fantasy?

Inception certainly meets the primary criteria that we would normally use to determine suitability for inclusion onto SFF:SE

The film is set "20 minutes into the future" in a world where a single large corporation dominates the Energy Sector. Futuristic settings are almost always on topic on SFF:SE

The central conceit of the film is that the main characters use a piece of technology that does not exist, the PASIV machine, originally designed to for military training but then corrupted to allow information theft. Since the film requires a fundamental suspension of disbelief, it's not only fictional, but Science-fictional.

On top of that, the film was marketed as sci-fi (complete with a viral marketing campaign and the pre-release of prequel materials) 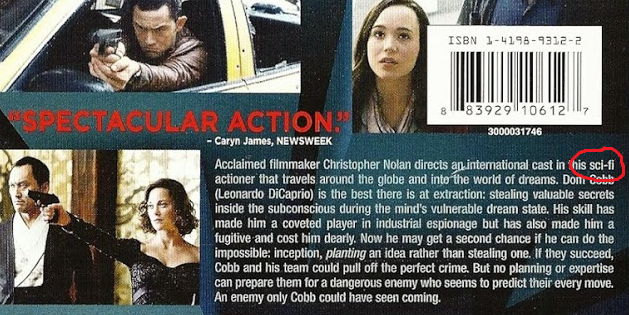 Certainly, dreams have been a feature of films in many different ways, for years. What “Inception” deals with is a science fiction concept in which really only one simple thing has changed, which is that you and I are able to experience the same dream at the same time. Once you remove the privacy, you’ve created an infinite number of alternate universes in which people can meaningfully interact – with validity, with weigh, with dramatic consequences. - A Man and His Dream: Christopher Nolan and ‘Inception’

"But to answer your question about how one acts in that world or that there’s something you need to be aware of or do different, I would say absolutely not, and that’s what was exciting about even attempting, you know, this was my first science-fiction film. The earliest conversations I had with Chris were about how both of us have a hard time with science fiction. We have a little bit of an aversion to it because it’s hard for us to emotionally invest in worlds that are too far detached from what we know." - INTERVIEW: LEONARDO DICAPRIO TALKS INCEPTION AND HOOVER

15
Policy on questions about which genre or subgenre a given work is in?

4
Are questions about science fiction/fantasy itself not considered on topic?
9
What type of gaming event would fit the site?
13
Does a story which is older than the term “sci-fi”, but does contain features commonly associated to the genre, count as sci-fi?
14
What does the SFF.SE logo/icon mean?
14
Are works that may or may not just be dreams on topic?
15
Policy on questions about which genre or subgenre a given work is in?
11
Defining the proper usage of hard- and soft sci-fi?
13
Is a story identification question on-topic if it doesn't include genre defining elements?