Is there a definition of active membership?

Is there a definition of an "active user" here, and, if so, are there statistics available, either on an individual or global basis, about how many still participate?

I've been rummaging through unanswered questions, looking for anything about which I might have some insight, and I couldn't help but notice that some of the older questions were from people with very low scores and almost no badges. I can well understand that being active may well be an on and off thing. But I would think that even occasional participation would slowly nudge up the scores.

Not every site is a good match, and it makes sense that people drift away. Interests also change. There's no blame attached. It's just an unfortunate aspect of the Internet that it is easier to silently vanish. Or maybe not so unfortunate.

I would still offer an answer to any question I could. But I have to wonder if low-score people from long ago are ever coming back.

Clearly, this isn't something confined to here. It's just a place I've quickly come to care about.

The only thing resembling a measure of activity is the "Last seen" metric on your user profile: 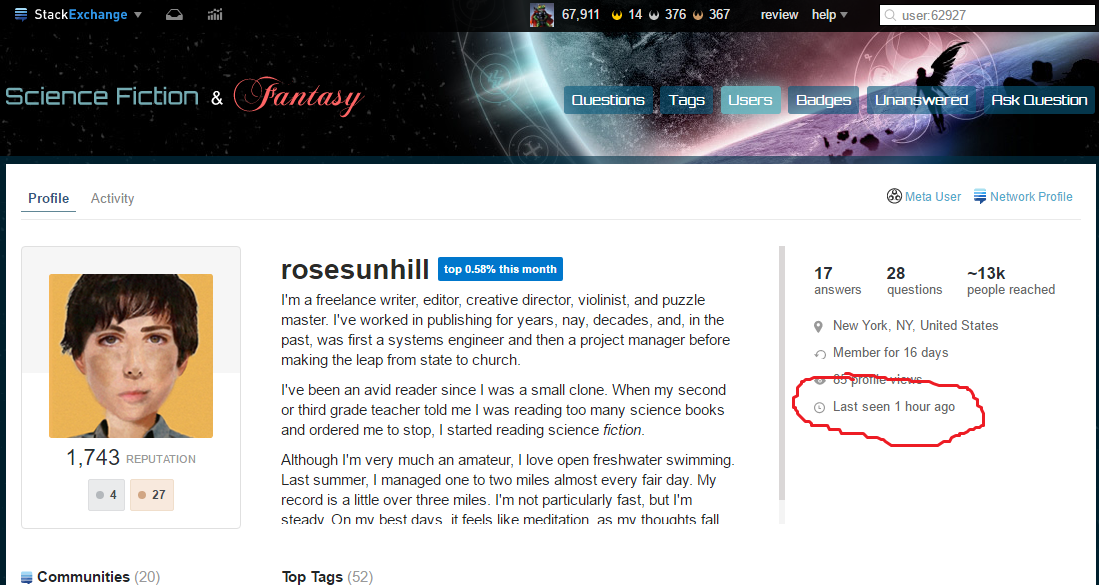 As you can tell (since that's a picture of your profile, and I am not you), you can see this stat for any user, not just yourself.

In principle you could use SEDE to find the last action taken by a given user (posting a question/answer or comment, accepting an answer, editing a post), but that is also imperfect, because it doesn't account for people who browse without taking action1.

Both of these, however, are poor indicators of how likely someone is to return to a site to, for instance, read an answer to one of their old questions.

About the only thing I'm prepared to say with anything approaching confidence is that if you have a user with only one question, posted more than a few months ago, who was last seen within a couple of days of asking their question, they're probably not coming back. But even that is a generalization.

1 You also can't get vote or flag activity through SEDE, which also limits the reliability of this metric

Not the answer you're looking for? Browse other questions tagged support recent-activity unanswered-questions .

16
Story Identification : Close questions where the OP isn't helping?
14
What should we do with a story-identification question where the asking user has been deleted?

4
Is there a bug with the populist badge?
3
What is the appropriate mechanism to reach SFF "management"?
19
Is there a way to hide the HNQ List?
7
Is there a moderators to users ratio?
6
Is there an issue with (my) daily vote limits?
21
Why was this 'not an answer' flag on a rant about US declined?
2
Tags redirecting to "featured" instead of "active"?
4
Why is there a duck on the SF&F page?
5
Why is this seemingly not very active user ranked so high when sorting meta users by participation?