This is a minor irritation, but the close (for dismissing the dialog without taking further action, not closing the question) button on the 'Vote to close question' box is on the left. In fact, I think all the close buttons are on the left.

Traditionally, in Windows, the close button is on the upper right. Due to the widespread use of Windows, this has become something of a convention, bucked only by (to my knowledge) Apple's desktop OS.

Having the close button on the left seems like a violation of one of the UI design rules: Don't Make Me Think.

Could we shift it to the upper-right corner, or was it placed where it was deliberately? If so, what was the reasoning?

Edit: To be clear, I mean the 'close this dialog box' button - the big 'X' in the upper-left corner, no the buttons that allow you to cast a vote. I mean the way to dismiss the box without casting a vote, or after you have cast one and hit the 'close' link again. 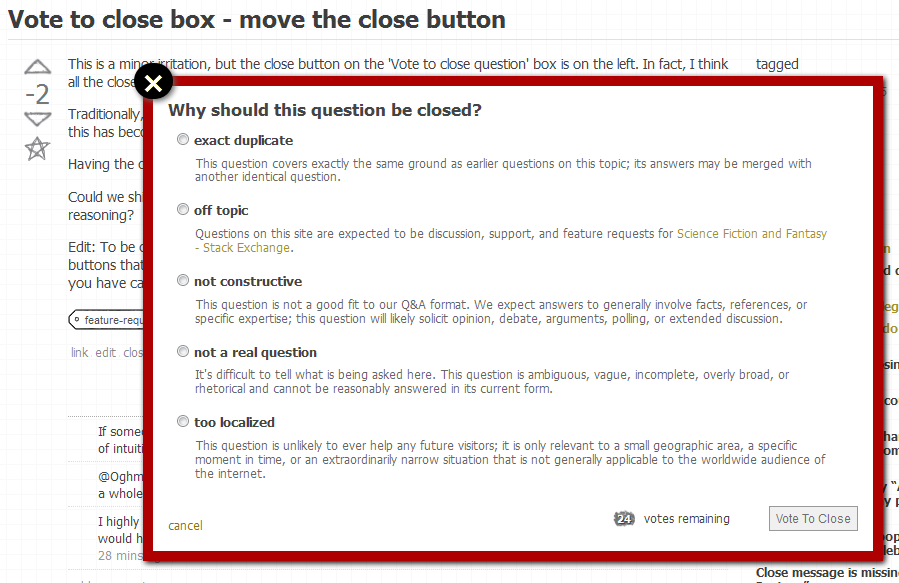 I absolutely agree with you Jeff. The default location of most lightboxes is the right. Of these, only one has the close button on the left, and it is designed to look exactly like OSX. All the others have it at the top or bottom right, or not at all.

And yes, Jedi powers DO come with the diamond. It happens to be a lightsaber crystal.

Meh. Even if it was important to be consistent with the most-used desktop OS — which I'm not convinced of: the dialog close button doesn't get much use — changing it is a bad idea. The web still remembers when Ubuntu did it.

Not the answer you're looking for? Browse other questions tagged feature-request user-interface .

29
Is there any interest in a spoiler markdown button?
15
Close Reasons: “What if ______ happened?”
3
Close vote review queue: let me see the answers on a review question
24
Tip box for Story ID questions
11
Can we have a per-tag “Make Spoilers Visible” button?
16
Should the “lists of works” close reason be updated?
9
Minor technical issues with off-topic close box