Updates to the site

You may have noticed some updates to the design lately, they are part of a SE network-wide update to a new base css framework.

The updates allow us to:

But more importantly, it gives you access to the new profile!

If you see any bugs please let us know in the form of answers (to this post) that illustrate one particular thing at a time.

This might not be a bug per se, rather than a criticism on the design, but it's IMHO a major issue, especially for someone used to the original design and the ideas and themes it induced and was based on.

The new design seems to significantly lack any red. In fact red seems to have entirely disappeared from it, while the original design featured red quite prominently, primarily for user links. And this prominent red-blue contrast seemed to directly fit to the logo, which contrasts the (cold) blue of Science Fiction with the (warm) red of Fantasy. In a design that already seems to overemphasize the science-fiction aspect over the fantasy aspect (which although admittedly being a bit of an afterthought in the site's evolution has still been an integral aspect of the site for nearly its entire lifetime), this seems quite a heavy change to the ideas expressed in the design.

Is there any way to get back some bits of red, maybe on the user links as before? If not, then could the reasoning for this change be made a bit clearer?

Badges in the list of other accounts are very cramped.

Here's the accounts part of my Activity tab:

Those badges are very tightly spaced – a bit of padding on the left-hand side would look a lot nicer.

status-bydesign This is intended styling. If user has already gained particular privilege, then we simply fade it out a little bit.

The links on the privileges page need more contrast. They're pretty difficult to read right now.

status-bydesign This is intended styling to stay consistent with Network.

In the old design, the community bulletin and questions with my favorite tags were having the colorscheme-matching design (though the bulletin meta icons could be hardly seen): 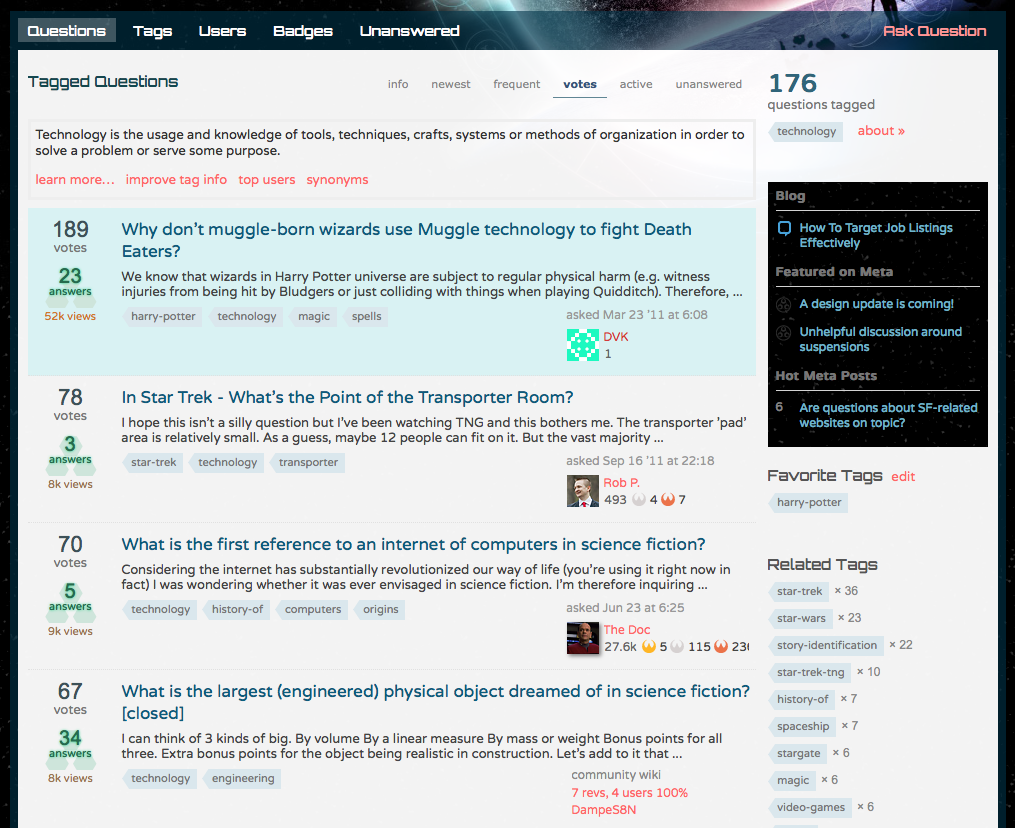 With the new design (which seemingly is going to be live by the end of november), the icons are fixed, but bulletin background and the questions which have my favorite tags got the yellow background, doesn't really look good. 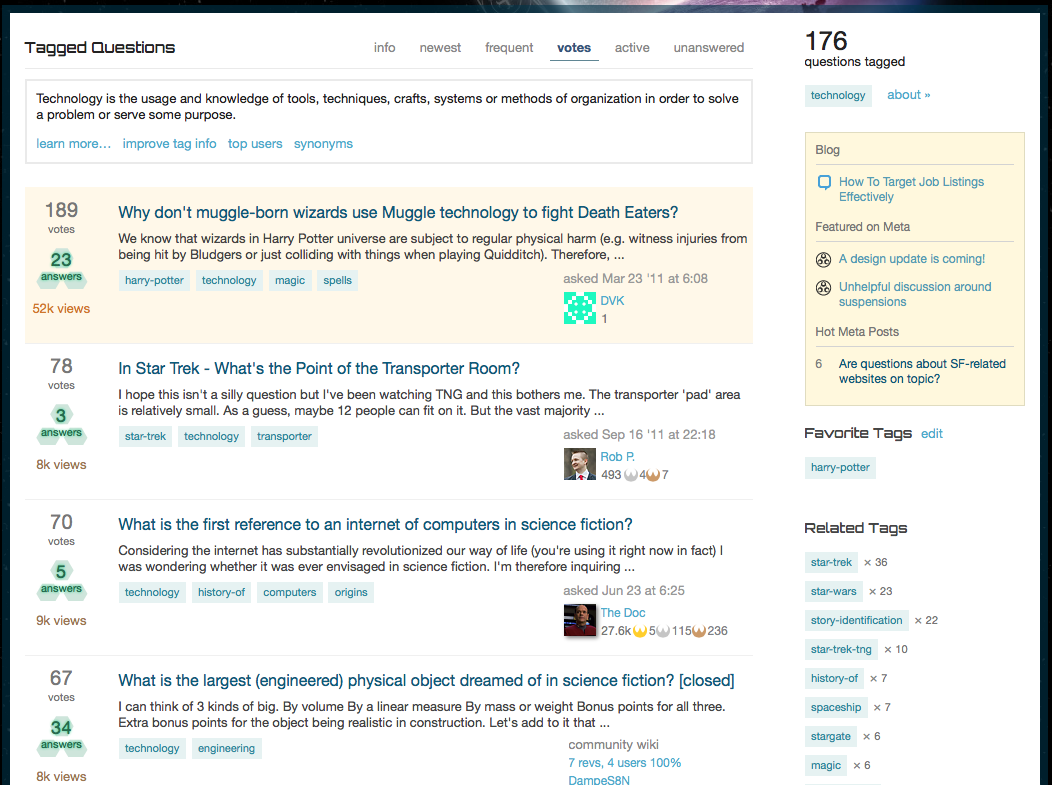 Could this be reverted to the blueish, please?

status-completed It's now fixed and will be live after our next production build.

The green checkmarks for accepted answers have become unclear as a result of the background lines becoming bolder and more defined: 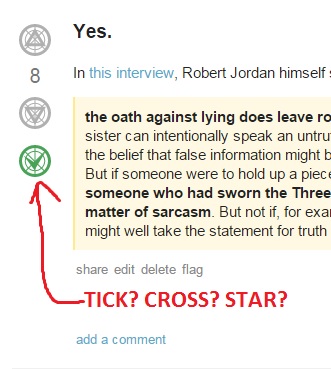 The same problem exists with the upvote and downvote arrows, but they're not quite as bad (IMO). Would it be possible to change them back to how they looked before, with the background lines being much weaker so that it's clear that thing is a tick?

This is especially important for new users. When they're not used to the site, they may not know about the practice of accepting the correct answer, and it's much easier to ask them to "click on the checkmark on the left" than "click on that grey patterned circle below the vote count - no, not the downvote button, the one below that".

Badges on the profile look a bit cramped.

Here's a pair of badges from my profile page:

I think the badges look a little cramped, and would benefit from a small about of padding on either side. Here's a mockup of what that might look like:

The newsletter ad is barely readable: 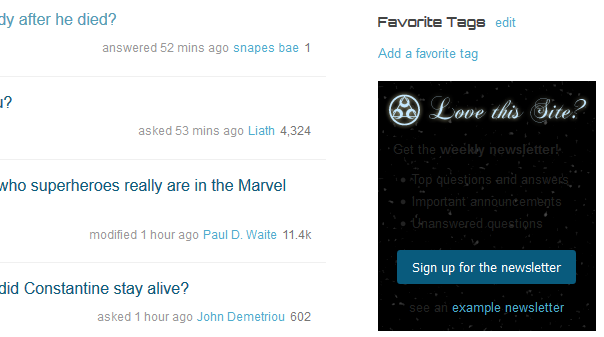 When sharing a link to an answer on meta.scifi.SE, the answer fades to black before "snapping back" to white.

To see what I mean, please click this link to the meta answer that I first noticed it on.

Presumably, this fade to black was great when the site was darker in colour, but with the new style is simply looks broken.

Edit: As per comments, this "black fade" effect happens in multiple areas of the site, including "show more comments", making a new post or using a link to go to a comment. An example of the comment one is here.

status-declined This won't be updated.

The site name has become too small:

The title "Science Fiction & Fantasy" used to be bigger; now it's hardly any larger than the "Questions", "Tags", etc. buttons, yet there's still a lot of space on three sides of it. What's the reason for this change in size?

Cf. e.g. the English SE, where the site name is MUCH bigger than the "Questions", "Tags", etc. buttons.

status-bydesign This won't be fixed. It has to stay consistent with entire Network.

"Favorite" tagged questions are highlighted with very-pale-yellow background. May be it's just me but it seems too pale - you can barely distinguish it from regular question's white background. Is that something specific to SFF and if so, can it be fixed?

Issue with a moderation tool:

I just handled a flag for a post with many comments. When I clicked the 'move comments to chat' button, I get this useless little overlay:

Inspecting the element shows there's no text in the overlay, which seems odd. 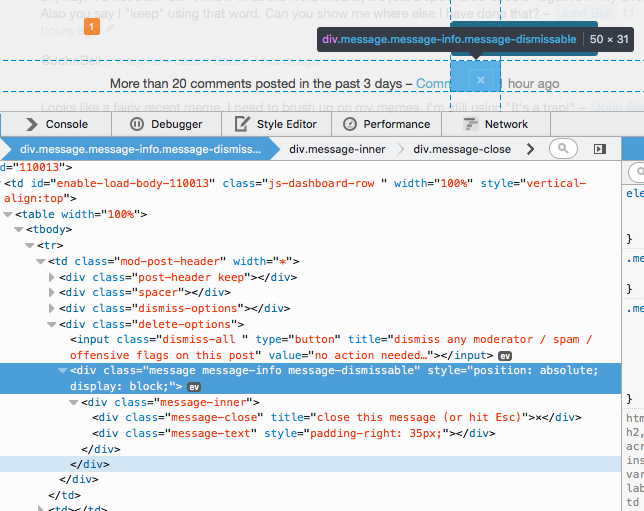 Not sure if this is the new design or an underlying bug. I think that overlay is supposed to have a link to the chatroom in it.

The RSS link for a given tag runs into the right sidebar.

To replicate this, go to any the question list for any tag. It is particularly evident on a tab without many questions to display, where it overlaps the text in the sidebar.

For example, the unanswered questions tab for marvel-cinematic-universe

status-completed It's now fixed, it'll be live after our next production build.

Long usernames run over the users information card on questions.

When the user name belongs to the asker or answerer, the result is cramped text.

When the user name belongs to the editor of a post, it runs over the information of the original author.

This is a broad issue I have with the new design: The design on the main site and meta are too similar. In the old design, I could tell at a glance if I was on meta or the main site because of the wildly different color schemes.

It looks like the main differentiator between main and meta is the top banner, but that's a pretty minor difference, and it vanishes if you've scrolled down a bit. Once you've scrolled down enough to see the question and answer bodies, there's no big indicator that you're looking at meta vs main. It looks like the colors between the two are ever so slightly different. The text on meta looks a little lighter to my eyes when I do a side by side comparison. But there's no way I can keep track of that minor difference to keep track of which is which.

Progress towards tag badges on my profile aren't updating.

Several days ago I set my target tag badge to be the silver harry-potter badge, and ever since then my progress towards it has shown as exactly the same, even though I've posted a few harry-potter answers since then: 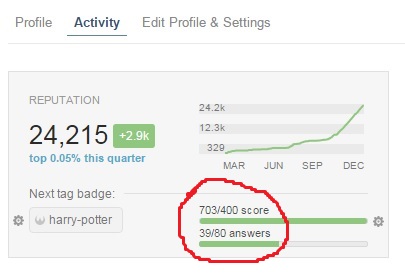 These numbers have been stuck on the same figures for a week or so now, even though the numbers shown on my Tags tab are different:

Surely this is a bug. On other Stacks I've been active on since the new profiles came out, the scores in the tag badge progress box updated at the same time as the scores in the Tags tab: daily. But here they're not updating daily or even weekly, and I suspect they may not be updating at all.

The new accept colors remind me of zombies, especially the faint text shadow: 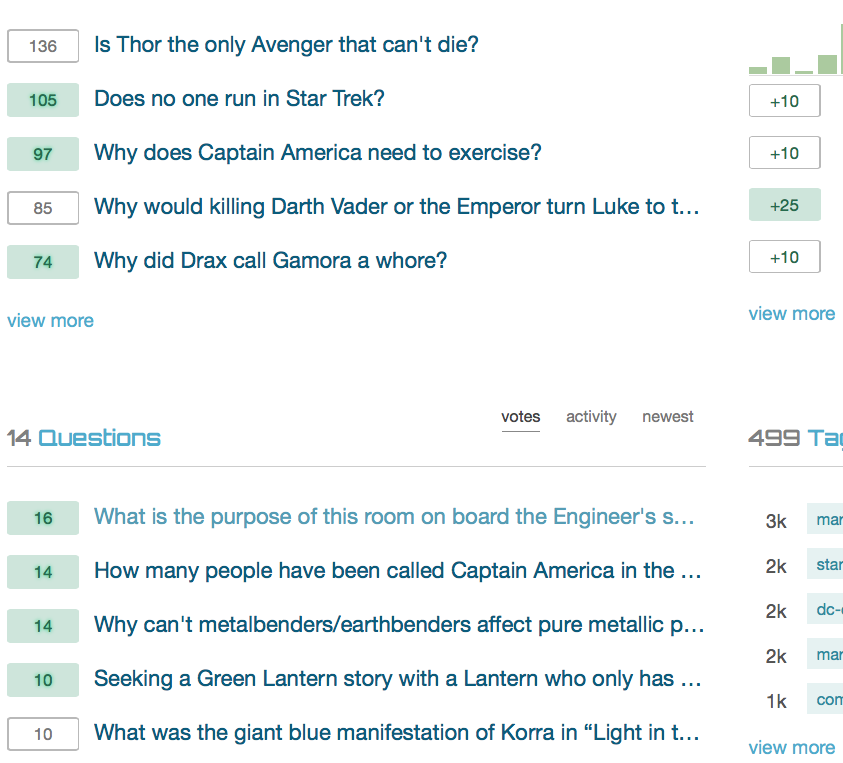 The ones used currently on Meta Stack Exchange would go better there: 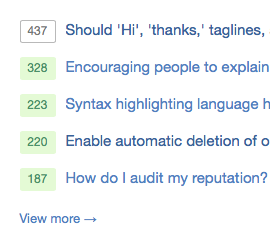 -3
Is the highlight not pronounced enough?
5
Are movies like "Twins" or "Junior" on topic, since they contain minor SF elements?
13
Side-by-side Markdown edit compare on Meta is unreadable
9
"Help Center > Badges" text on Meta is the wrong color
7
Umm... where's the favicon?
0
Color scheme on meta is... not good

8
What should the site be called / named?
8
What is the background to this site? How was it made? Is it Space?
3
What measures have been/can be taken to guide guests & new users with respect to the rep requirement to comment?
15
What should the new background/theme look like?
10
2020: a year in moderation
10
Can we dupe-close Story IDs when confirmation is given by what looks like the OP’s second account?