The Number 3 question has been answered, please share your story

Story where the number 3 is the monster?

Incredibly this question was answered. I want to feature this question as a Question of the Week blog post, so I'd like to get some stories about the many many people who tried to answer this question. If nothing else, it would be nice to have a list of prominent users who all made an attempt.

The blog story has been posted.

Story where the number 3 is the monster: Finally Answered!

I had been working on the question on and off for the past eight months.

I went to great lengths to answer this, even checking leads that had been largely dismissed. Apart from the obvious search attempts, here are some specific things I tried.

I don't think it was R.L. Stine, but I cannot remember the author.

I wanted to be absolutely sure, given the R.L.-Stine-esque nature of the description, and so in July of this year I contacted him directly:

@RL_Stine Quick question, if you have a moment. There is a now-famous question on a few forums regarding a horror story...

@RL_Stine According to the asker, the narrator is a boy who was scared only twice a day for exactly one minute, when the clock read 3:33.

@RL_Stine At those times, the 3's would be powerful enough to leave the clock and run around terrifying the boy!

@RL_Stine The asker suggested it might have been one of your stories. Ring any bells? Thanks for your time and have a nice day. :-)

@RemnantOfPraxis Not my story. Let me know if you find out whose.

I was impressed that Stine responded within an hour. At least that definitively ruled out a large chunk of horror literature. (Of course, I have updated Stine regarding the solution to the mystery.)

Visit to a horror specialist

In August of this year, I had a two-hour meeting with a librarian in the city I currently live in, who curates the library system's horror collection. He has an encyclopedic knowledge of 20th Century horror short stories, but couldn't think of a "3:33" short story that matched this one in both content and time period. The ones he brought up that were closest in content and time where ones that I had already ruled out.

Interestingly, he did ask me if it could have been a number other than 3, as there are plenty of horror stories involving clocks and various times. However, I mistakenly vetoed this, asserting that the OP must have gotten that main detail right!

To repent for my mistake, I, along with @MikeEdenfield, reached out to @Zompz (the OP, who hadn't been active on the site in about a year) to let her know that the mystery had been solved by our new expert sleuth, @KyleHale.

The description had me completely fooled. I thought it was kiddie-lit; it never occurred to me that it was a story published in a regular science fiction magazine. That saved me from ransacking my collection for it, which would not have done any good. I reposted the question in the Children's section of the BookSleuth Forum at Abebooks.com, but got no response.

I tried when I first joined the site, but to no avail.

In order to atone for my dismal failure I've contented myself with helping Kyle Hale by editing in some quotes from the story itself (and a nice picture) and offering a chunky bounty.

Not my story, but some interesting statistics related to this post.

Here's a graph of the votes on both question and answer over time: 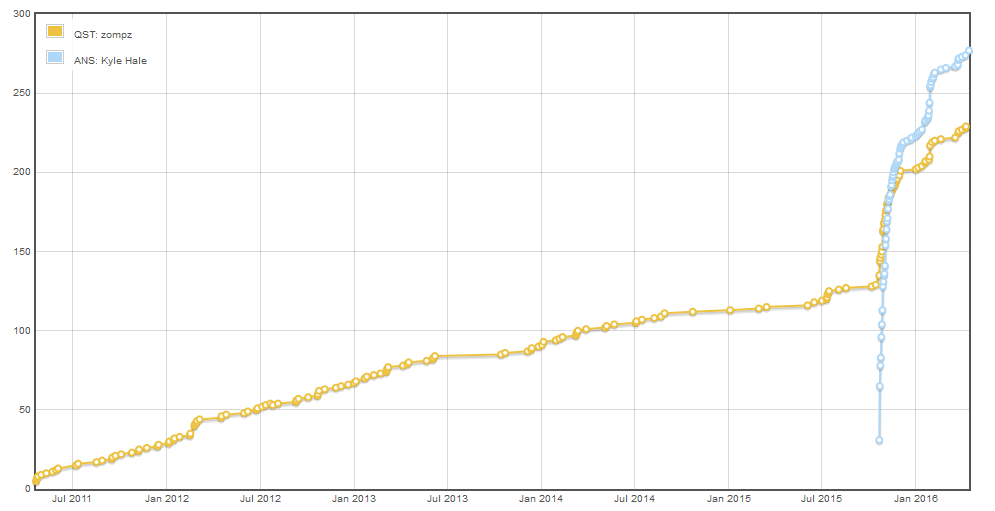 With nearly 6000 rep, Kyle Hale is easily the person on this site with the most rep earned from a single post. His answer has also earned more points in bounties than any other answer on the entire Stack Exchange network.

While I never put a lot of time into researching it, it was a question that I plugged away at from time to time. I have since picked up a copy of the story as found in the Bruce Coville collection and I have found it very enjoyable.

Not the answer you're looking for? Browse other questions tagged discussion blog .