Why was this answer to the question of Hermione's ethnicity deleted?

This answer was deleted by a mod.

Why was it deleted?

However, that doesn't seem like a good reason to delete the answer. Instead, its merits should be judged by the vote. It clearly isn't spam, it's not rude or abusive, and — as I've argued — it's not that clearly not an answer to have it deleted for that reason. 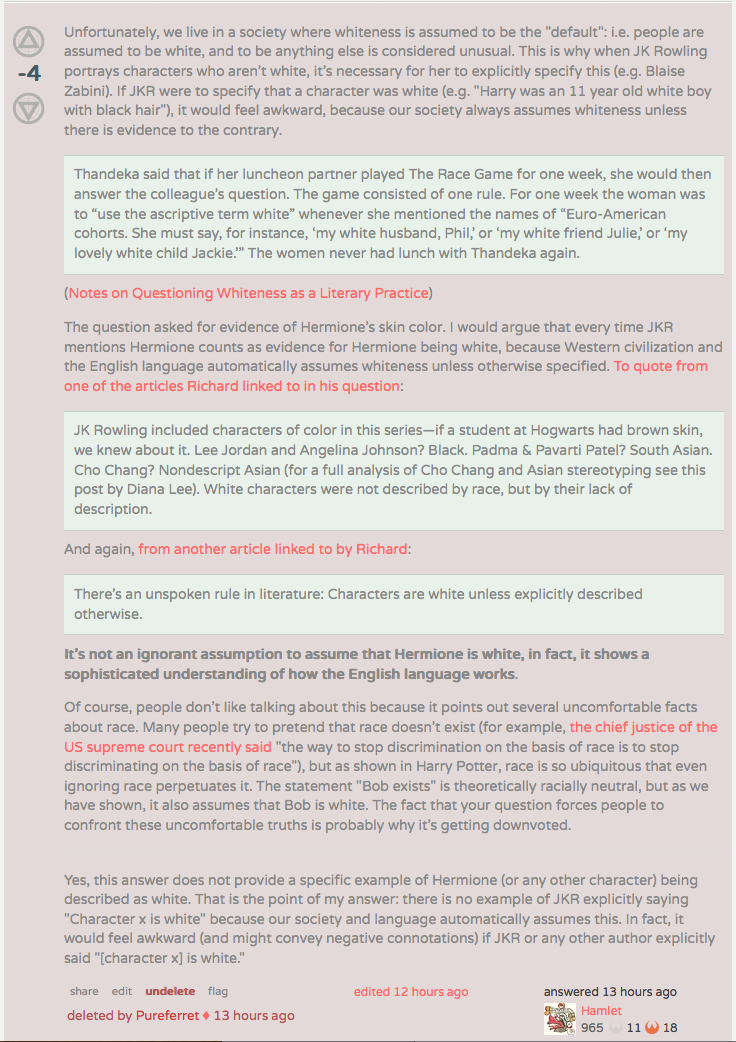 Even though I hadn't read Keen's post, on first reading of the question, I initially thought it fell into this criteria:

Which to me is also grounds for deletion.

But after being prompted by this meta post I'd like to think the answer is not entriely tangential. Especially after Kevin's edit.

I'm happy it got undeleted, and I'm sorry we had to go through this rigamarole.

According to Keen's answer,

(...)
I don't delete anything that's a non-joke attempt at answering the question, even if that answer is buried in a little cruft. If a post is entirely tangential commentary, a comment/reply to another answer, or trolling/offensive/spam, then I delete. But if the post makes some attempt to answer the question, I don't delete it.
(...)

So if that's in line with this stack's or even SE's policy, the answer shouldn't be deleted.

As soon as I saw the title of the question, I recalled a quotation from Ursula K. Le Guin on the protagonist of her Earthsea stories:

The fantasy tradition I was writing in came from Northern Europe, which is why it was about white people. I'm white, but not European. My people could be any color I liked, and I like red and brown and black. I was a little wily about my color scheme. I figured some white kids (the books were published for "young adults") might not identify straight off with a brown kid, so I kind of eased the information about skin color in by degrees—hoping that the reader would get "into Ged's skin" and only then discover it wasn't a white one.

I think it is possible that some readers never even notice what color the people in the story are. Don't notice, don't care. Whites of course have the privilege of not caring, of being "colorblind." Nobody else does.

Agree or disagree with her politics, I hope you can see the important point this author makes about the art of writing and, in particular, the importance of leaving some details open to interpretation in order to engage readers. (As an aside, I did not notice the color of Ged's skin when I read the novels as a young adult. It would very likely have bothered me if I had.)

J. K. Rowling, however, is a different author who had different concerns with her characters. Unless she says something explicitly (either in the novels themselves or while talking about the novels) the answers to the question must be guesswork. Even something seemingly clear as cover art can deceive. Here's Le Guin again:

Gradually I got a little more clout, a little more say-so about covers. And very, very, very gradually publishers may be beginning to lose their blind fear of putting a nonwhite face on the cover of a book. "Hurts sales, hurts sales" is the mantra. Yeah, so? On my books, Ged with a white face is a lie, a betrayal—a betrayal of the book, and of the potential reader.

I get that questions like these can be a fun way to explore the universes that we love and wish to inhabit as readers. But it's very dangerous to encourage guesses of one sort and delete guesses of another. Agree or disagree with the proposed solution (when using English, the unspoken default race is white), it functions the same way as the other answers on the page. I think it a positive result that the answer has been undeleted.

Let's talk about race and this site.

A few years ago, when I first started work as a Community Manager, I ran across a controversy on this site about race. It was notable to me since I never thought that a site about Science Fiction would have this sort of incident. In the years since I have learned I was utterly naive. For whatever reason this topic is a hotbed of controversy about race. I would not have predicted such a thing.

The comments surrounding this question are, unfortunately, yet another example of a mean-spirited debate about race on this site. Thankfully the comments have been deleted, but not before the targets of the comments saw them and received the message. I won't republish the nastiness, but I will say that lots of people who really should know better left comments that fall short of the standard set out in our be nice policy.

I don't know much about this community or the questions asked here. I'm probably seeing the worst examples that get pointed out to me because of my position. But my impression is that this community is unable to hold a civil conversation about race (or, for that matter, gender). I would suggest that this community decide to not put up with this sort of embarrassing behavior. That may very well mean closing questions about race. (Not, I should hasten to say, because they don't belong on the site, but rather because the site lacks maturity when it comes to the topic.) It probably means timed suspensions for those who are unable to control their comments and say regrettable things. It definitely means aggressively deleting content that is not welcome on Stack Exchange sites.

This site is supposed to be fun. Nobody is paid to answer questions. Our moderators volunteer their time to keep the place orderly; they wouldn't if they didn't enjoy caring for this community. If you are having fun, I'm glad for you. But just be sure you aren't having your fun at the expense of others.

Not the answer you're looking for? Browse other questions tagged discussion support status-completed deleted-answers .

8
Does Sci-Fi use different flagging rules from other SE sites?