Best policy when edit to question invalidates the answer

While I love how usually quickly you can get answer on this forum, sometimes it leads to problems, when the person asking forgets/fails to ask precisely the question they want answered and someone meanwhile already answered... unfortunately not exactly on the topic that question's author had in mind.

Lets say I'd like to ask about the hair loss problems among elves:

Has there been any description of bald elf in literature?

For which I get answer that

Yes, there was an X in book Y that lost his hair after meeting the fire-breathing dragon Z

Uh, yes... it is right, but I really meant "natural baldness", so I should I now:

Well, of course I should clarify everything perfectly at the first time, but after all, I'm just a human prone to make mistakes.

When you want to follow up with the author of a post, the best solution is always to leave a comment. The reason why is at the core of why we dislike edits that invalidate answers: that's the only way answerers get notified of something changing. There was a feature-request to change this back in 2009, but it never got an official response; it seems like this is a feature that's not coming in the near future, if ever.

Having said that, I don't personally think there's necessarily anything wrong with making clarifying edits to a question; it depends a great deal on the specifics of the edit, and how drastically it changes the parameters of the question.

The specific example you give, for example, is a bit drastic in my opinion; it excludes a huge number of answers (which is, of course, your intention). A better edit might have been to add:

Edit: I have a special interest in natural baldness

It's also worth pointing out that "Existing answers are outdated" is a bounty reason1, though it wasn't intended for this use case: 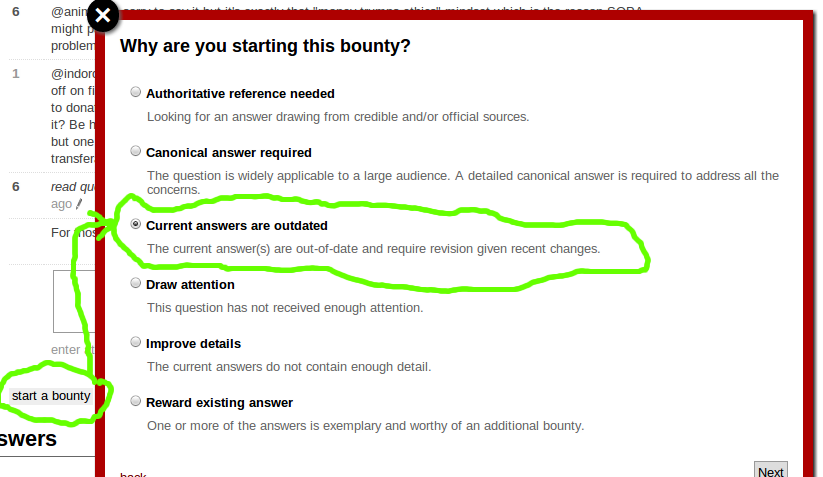 That reason is intended to address old questions where new information may have been released that the existing answers don't address.

I don't think this specific instance (that is, Has anyone gotten married more than once in the LOTR universe?) is a good example of this policy in action; I would have answered both versions of the question (the one you posted and the one you meant to post) in exactly the same way. Likewise, I would answer both versions of your "bald elf" example he exact same way2.

However, I want to caution against narrowing down your questions, but for a different reason: you'd be surprised the things you can learn. Ideally, a good answer to a slightly overbroad question will include the answer to the question you wanted answered (and if it doesn't, you can always ask in a comment), but you'll gain a little bit of extra trivia along the way. And that's why we're really here, isn't it?

2 Even assuming we lived in a world where the correct answer to both wasn't a flat "No."

According to Meta Meta:

In general, any edit that changes the question should be rolled back, but for a question without answers, sometimes I think the OP can be given a little leeway as long as they aren't trying to get around a question ban and/or completely changing the question.

However, any edit to a question, other than clarifying the original question, that invalidates any answer should be rolled back and a comment should be left indicating what they did wrong. Sometimes it is possible to edit the question in such a way as to integrate the new info added by the OP without invaliding answers and the editor should try to make an effort to do that.
Source

Users are encouraged to clarify and improve existing questions, if they are under-specified or otherwise incomplete. That's not the same thing as asking a new question that renders the existing answers invalid.
Source

This meta answer suggests that the OP should ask for clarification in comments rather than by editing the question.

In the event that the OP makes the change and it keeps with the spirit of the question and does not result in a very different question all together, then leave the edit so it best gets across the point of your question and draws out the best answers to it.

So long as the OP is the one making changes to the question to ensure they get the answer they are looking for, then I see no problems here. If someone has answered the question and then they are wrong because of your changes, they can modify their answer or pull it. The OP should only care that their question is clear and draws out the type of answers they are looking for.

The OP is welcome to modify their question by adding a remark about the further clarification they are making. Such as:

Edit: To clarify, I am looking for instances of "naturally occurring baldness".

29
How to handle question with many positively-voted answers that misunderstand the question
22
Why are these joke question & answer allowed?
14
Is it good practice to substantially edit older questions?
6
Was this Rollback justified?
3
Is it okay to edit a question to match the answers given?
2
Is it okay to rollback an edit made by the original author?

5
Is philosophy part of this site?
24
Should questions about future works be closed as Primarily Opinion Based?
2
What happens when you edit an accepted answer?
3
What's the policy on whole-answer spoilers?
2
Ep. VII: So many questions and none that can be answered... yet! Is this allowed?
4
Comment,edit or answer when adding content
7
Under what conditions is self-answering 'Story Identification' questions considered abusing the site?
11
Do we have to ask if all these works are on-topic or not?