Can I comment on my own question asking people to vote more?

I'm inquiring about this question:

In the Netflix Daredevil series, is the "Black Sky" concept from any comic?

It is the highest-view question so for this year by a margin of 26,000 (over double the next-highest view count this year). Of those top-ten, it has the second-lowest score (9 compared to 6). I made this query. It's also #9 in views when you include 2014, despite being only 10 days old, and again second-lowest in score (tied at 9, compared to 5).

I realize my question is probably bringing a lot of traffic straight from Google, and so the views aren't necessarily from the community. As such, they aren't creating account with which to vote.

Nevertheless, it's disappointing to me (as a relatively new user), to see my question so lowly voted, when it's clear people want to see what was asked. I've received no feedback as to how to improve my question (it's pretty straightforward), but I would welcome it.

So, would it be appropriate for me to comment on my own question asking new visitors to take the time to register if they found the question and/or answers helpful, so that they vote?

I'm not looking for a rep-gain here (getting a Gold "Famous Question" badge was more than I ever expected!). I mainly use Parenting.SE, where voting is typically much more active for questions and answers with high views. I realize there are far fewer questions to focus attention on in the Parenting Beta.. I'm trying to wrap me head around the differences.

As I noted in my comment, my personal opinion is that it is tacky, though there is nothing prohibiting you from doing so (site policy, etc). However, while my initial reaction is that you were overreacting, I checked the query you posted and decided to look at questions in general for the year. And I was quite surprised.

Graphing the questions for the year with your question, I get this data: 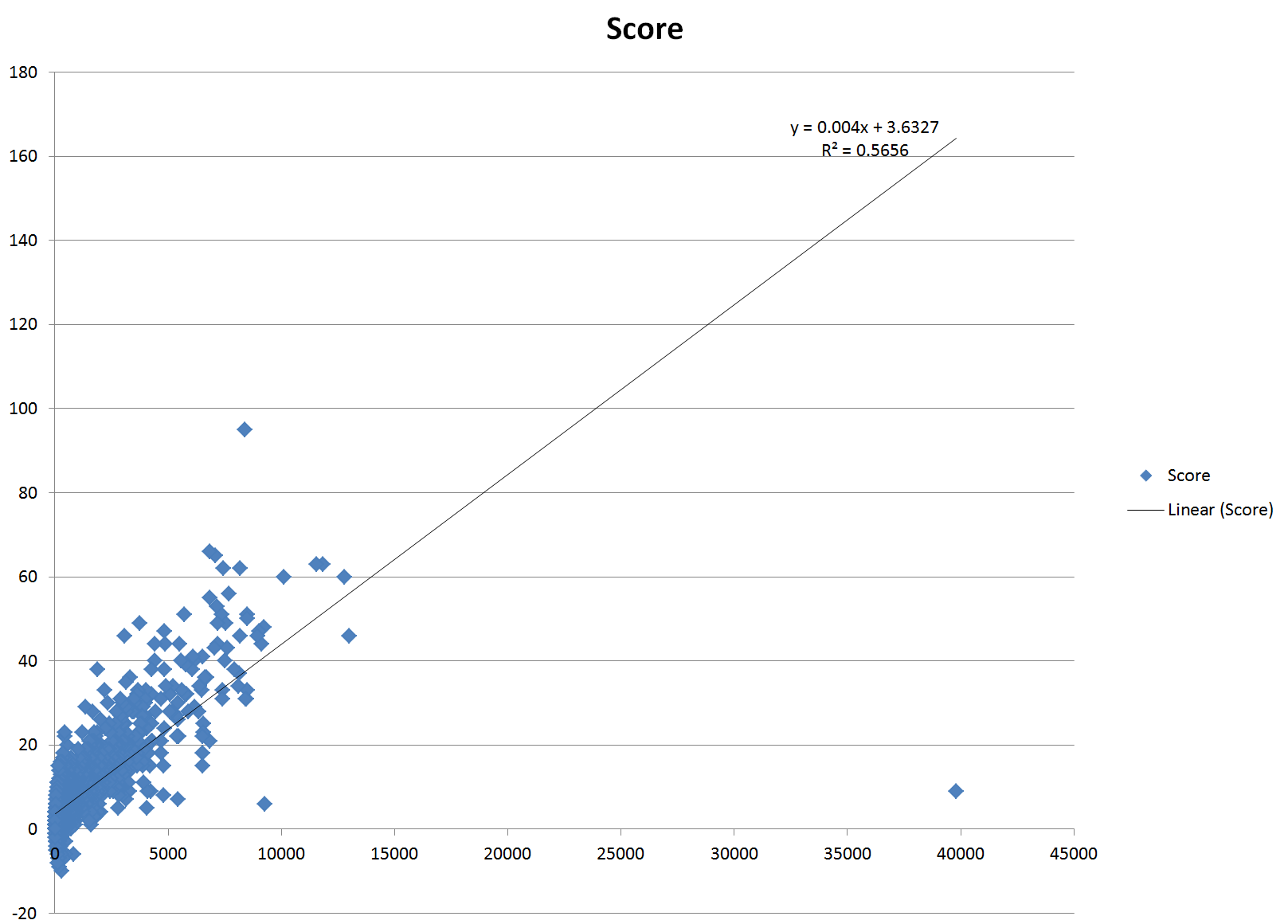 Graphing the questions for the year without your question, I get this data: 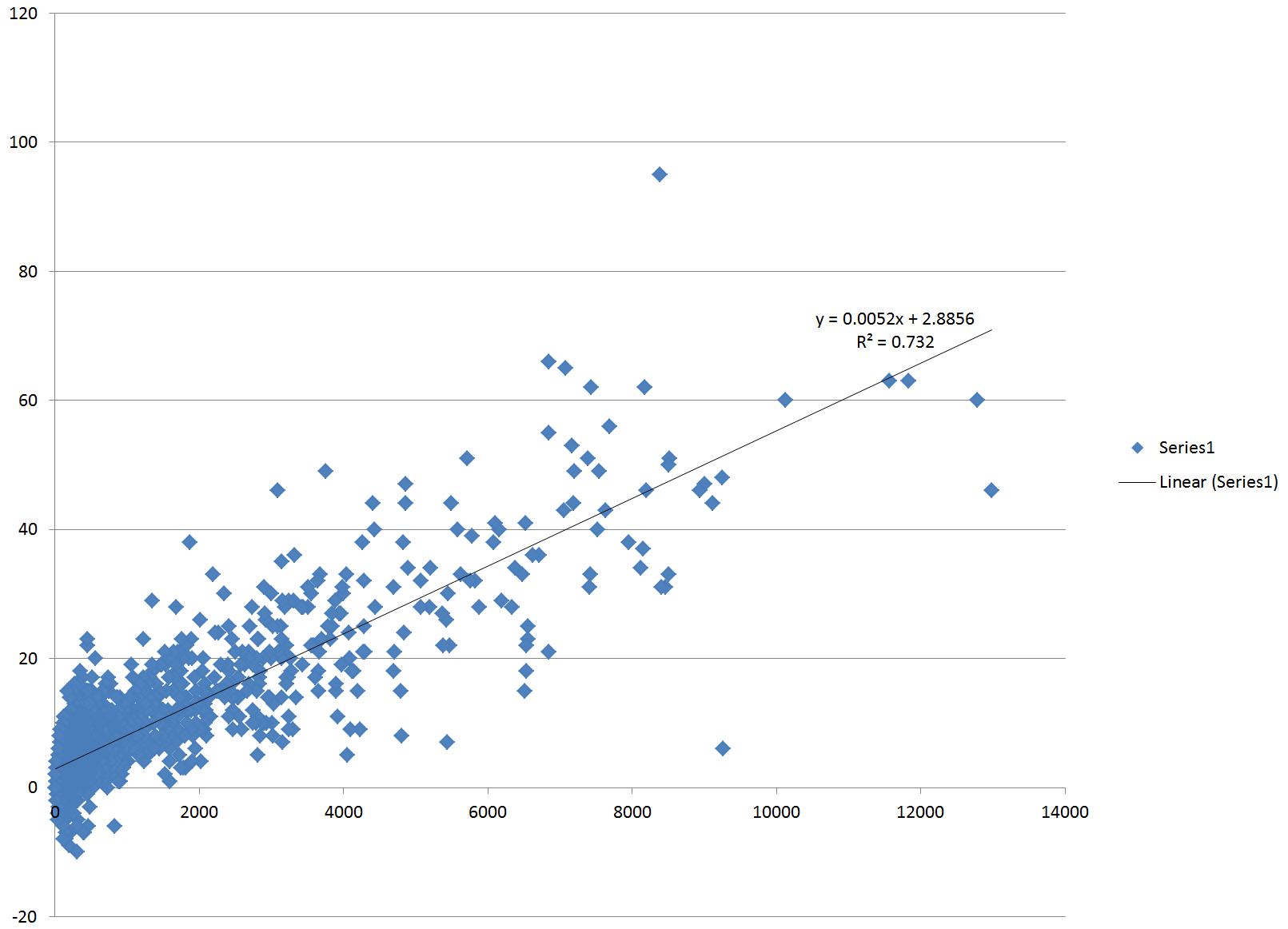 BUT...this is for just this year, which is only 4 months old.

So I ran the query for the entire history of SE (using the same query, but with a start date of 1 Jan 2011), and got a much larger data set (over 20,000 data points). I graphed this as well, and as you can see, there's a lot more outliers. 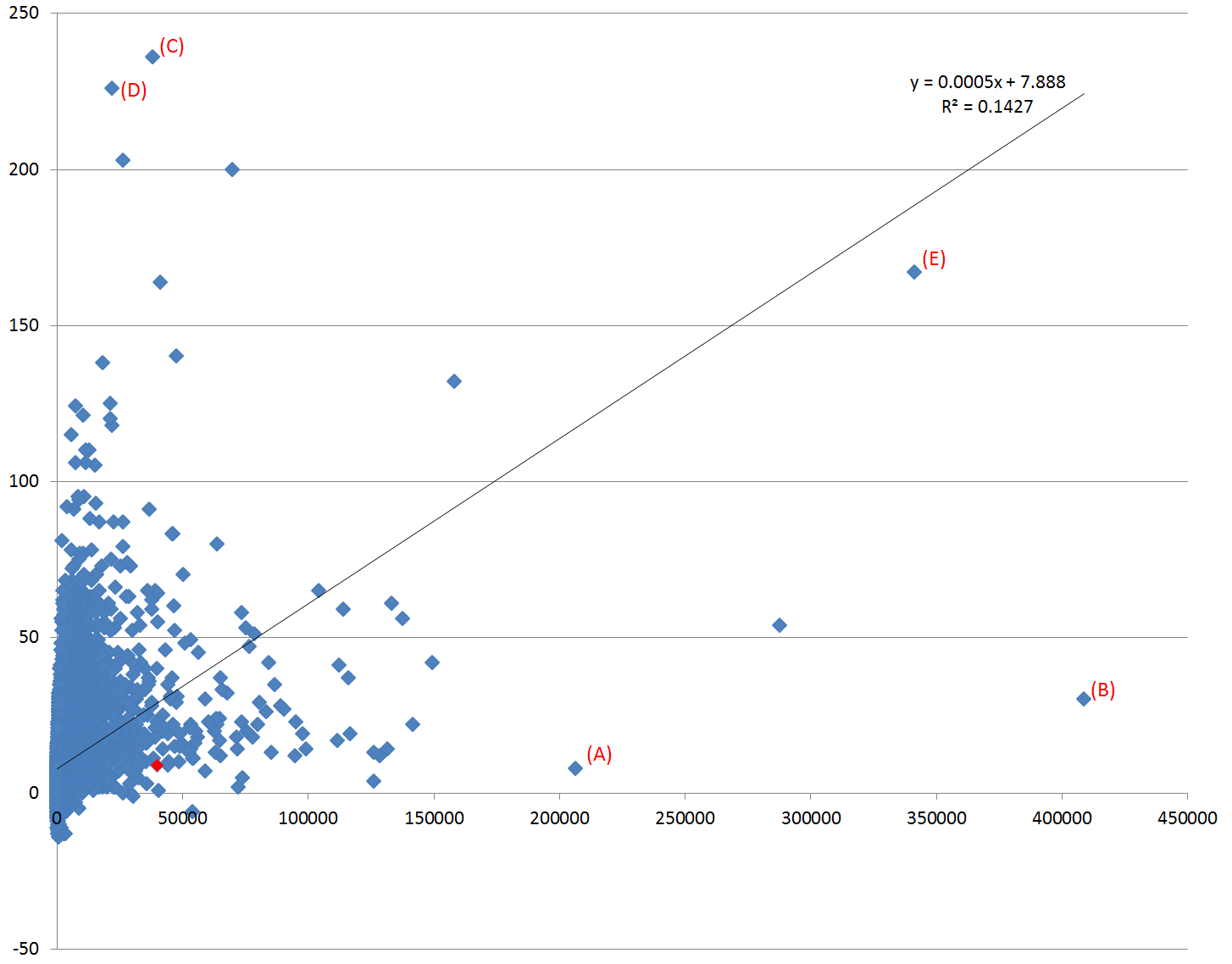 Your question is the one highlighted in red in the lower left-hand corner. As you can see, there are a significant number of questions in the area right around yours that have similar votes-to-views ratio. Some have less votes with a similar number of views. But if you look at the overall picture, the data is significantly more random. The R-squared value drops to 0.14, a value meaning there is little correlation between views and votes. Your question is no longer an extreme outlier, in fact, I've noted several questions of interest on the chart:

Then we see some that are the opposite.

And for fun, we see the most "extreme" example that fits the trendline:

So there's not a huge correlation historically between views and votes. Your question is not the first, nor will it be the last. I suspect that over time, you'll pick up some more upvotes with the views, but it's not unheard of for questions to perform like yours. Given how other questions are similarly received, I doubt that any plea for more votes would be particularly effective.

As you noted, a lot of your views are probably drive-by views from Google, who can't upvote anyway. From some of the examples that are similar, they likely recieve a lot of drive-by views but not votes, because the topic is popular at the time.

I feel for you in what you are asking ... more voting. I wish more voting was done throughout SE. Everyone has 40 votes per day, why not use them? The problem is, begging for votes isn't going to help you or your question. I have seen it happen on SE ... when I do, I intentionally don't vote it up no matter how good it is, and I'm a prolific voter.

Unfortunately, IMHO, you just need to let your question ride. Enjoy the fact you gained a gold badge from it due to it's popularity. Those don't come along that often ... unless your user name is Richard ;-)

Commenting on your question to ask people to vote for it would not be allowed, polite, or effective.

You can read what comments are for in the help center. The purpose of comments is to do something that, ideally, should lead to an edit of the post, such as requesting clarification or pointing out something that could be improved. A comment becomes obsolete when the post is updated accordingly or when the proposed change turns out not to be warranted.

Pushing people to vote for your stuff is tacky in most social settings, including this community.

If your question is getting a lot of views but few upvotes, it means that it's being seen from people from outside the SFF.SE community, who cannot vote here. It's likely that it's been linked in some high-traffic community. There's no point in telling people to do something that they cannot do.

4
What's the effect of the recent renewed interest in Star Wars on statistics?

0
Should moderators wait till community made its opinion fully known before closing?
0
Should a Down Vote require a comment?
20
Why don't some people vote?
12
Should one know at least some canon of a question they're preparing to VTC?
4
Migration to M&TV - reopening the discussion
14
Movie Night! Make your fantasies come true on Tuesday the 30th!
2
Shall we delete this old, off-topic but highly viewed, question?
4
Can I add linebreaks to comment? How?