What science fiction technologies do you hope / wish will be realized in your lifetime?

I'd like to do a blog post about what technologies from science fiction people hope or wish will be realized within their lifetime.

Please cite the source material (literature, movies, etc) of the said technology, with a brief description of it and why you want to see that technology become a reality. Do you think that technology could be achieved within the next n years? (n being from now until your death).

I just hope that we can get clean, reliable, safe fusion energy in the form of household devices.

We've got one year left! 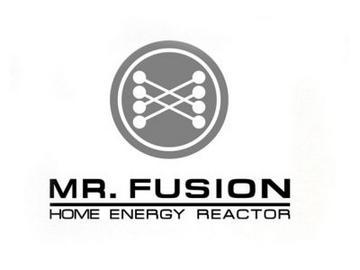 I'm going to skip all the jetpacks and spaceships and go straight into Singularity mode - Brain Uploading1.

As we get older, our bodies start to fail us more and more, and for some of us they were never a bastion of stability in the first place. The promise of being to upload our personalities onto a computer - either as disembodied programs wandering around in cyberspace, moved onto a clone or robot body, or powering a completely different chassis, this is the promise of immortality without needing to solve the biological mechanics of aging.

There are a lot of good examples in fiction:

And now for the big question, do I think this will be possible in the coming decades? It's hard to say. Computing power and storage keep advancing, and replicating a human's consciousness inside a computer might be possible even without understanding how said consciousness works. I think I'll give it a solid "maybe".

1 I originally typed "Brian Uploading", which is a fine thing and I appreciate his efforts, but I'm not looking forward to it as much.

The medical tech in Elysium. It would be marvelous to never have to worry about your health again.

At one point, one Joel Spolsky wrote a clearly science-fictiony blog about a world where StackOveflow reputation serves as a useful benchmark when participating in software engineering hiring process.

I wanna live in that world.

I'm going to go with virtual reality, specifically the kind where you act through the body of an avatar to interact with a generated environment. There are plenty examples:

Going with the kind of virtual reality available in Otherland, where the avatar body is digital, I think this kind of technology won't be available for at least 200 years because it would require neural connections for full stimulation of the senses. On the other hand, virtual reality involving only some senses (sight, hearing, and tactile) can be simulated without neural connections and a complete VR environment for those senses could be available within, say, 50 years.

Now as for why I'd like to see this as a technology: It would offer full communication in a more personal way than could be achieved through email or video chat. It could also aid in escapism, acting as an outlet for negative emotions. I think it could have clinical uses as well, such as isolating psychological behaviors from physical ones (like Parkinson's vs. nervousness).

Also, I’d like to see an infinite storage space with intelligent properties that travels through time.

I think you all know exactly what I’m talking about.

Yes…I’d like to see Bending Robots invented within my lifetime. 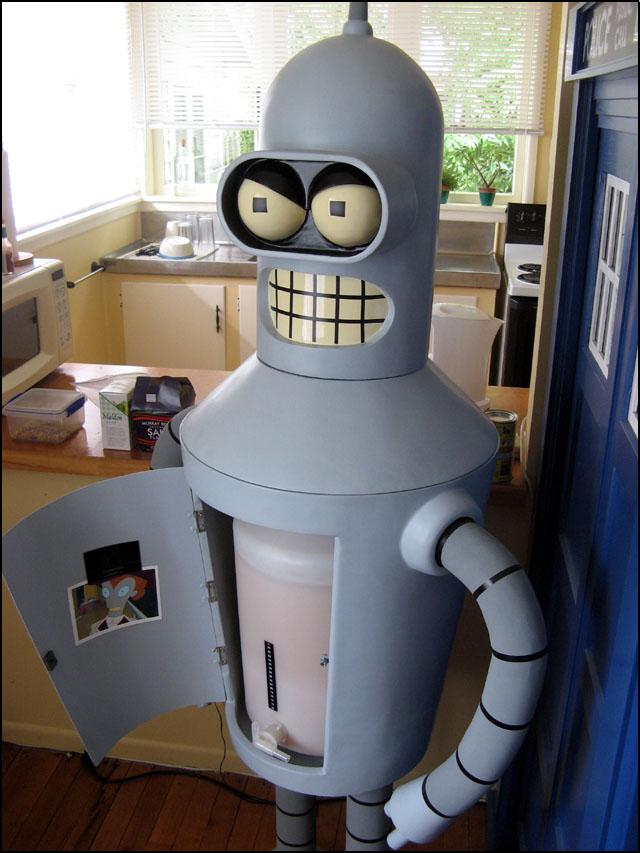 Now hang on a sec and let me explain why Bender is great.

They are extremely useful for their primary constructive/destructive purpose of bending. 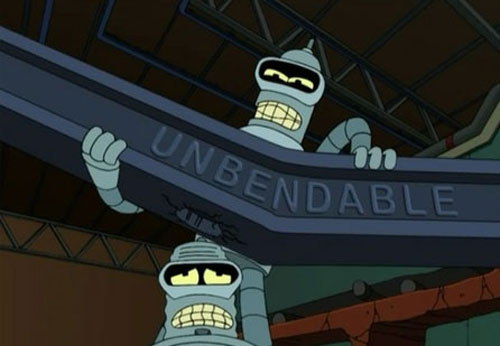 They run on a cheap reusable fuel...albeit at remarkably high emissions.

Plus a door thingy. 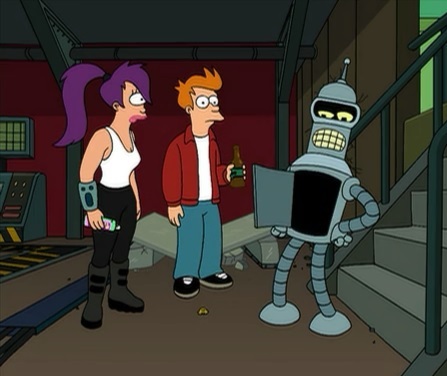 We've got a full 985 years to complete one, so let's get started on making the world's greatest most in-your-face robot! 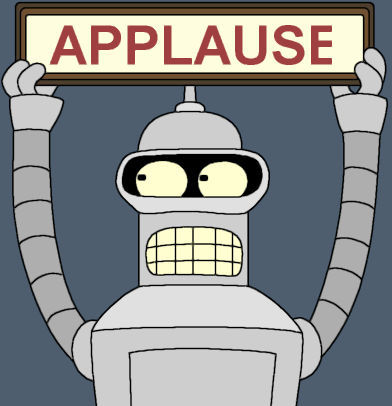 I'm not obsessed or anything, I just think that if science can put a man on the moon that they can come up with a good way (virtual reality, cloning, robotics, etc) to allow the common man (someone like me, for example) to have * ahem * relations with popular celebrities (like Sarah Michelle Gellar, for example). 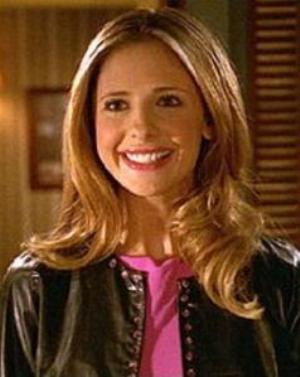 No nasty hard takeoff like in the Terminator movies, just a slow, steady climb up the old sigmoid curve, taking humans along when they are ready. I want to see this become a reality because strong AI gets you all the other sf tech goodies if they are obtainable at all. I think we could see strong AI in ten years. All the trends in brain scanning technology and massively parallel computing platforms are pointing in the right direction for something to happen. Machine learning is at the core of many tools we use daily, which means AI is beginning to catalyze changes that will feed back into better AI systems. Ten years is my guess.

The singularity thus making Immortality possible, to transfer my consciousness to a machine and live forever.

I would like to see a massive increase in the scope and power of the relatively new science of neuromodulation, the various methods of directly stimulating the brain - whether electrical, magnetic, or via sound waves - that has been shown in many studies since about 2000 to have potentially vast implications in the treatment of mental and physical illness and in the enhancement of cognitive functions in healthy brains. The most sophisticated form of neuromodulation at present is transcranial direct-current stimulation, which has hundreds of studies attesting to its effects.

Ideally, neuromodulation will reach a point where we are able to substantially reduce our negative emotions (e.g. fear and anger) and enhance our positive emotions (e.g. compassion and empathy) without having to spend decades in meditation as the most 'advanced' humans in that regard do today. (Those who don't believe intensive, prolonged meditation can achieve extraordinary results in the reduction of negative emotions and enhancement of positive ones should examine the literature on the ~15 years of extensive studies we have done on the subject.)

I suppose this may not count as a science fiction prediction, given that I am talking about an already established technology that - unlike many of those listed above - really will be available to the general public very soon, but the extent to which it can be continually developed is unknown. Meditation is a difficult skill to develop and a very difficult skill to master, and this technology gives me hope that I won't have to go to the extremes of people in the past of spending 40 or 50,000 hours sitting in a cave to reach the same level of emotional well-being that they enjoy.

Not the answer you're looking for? Browse other questions tagged discussion blog .

14
What is and what isn't considered science fiction?
13
What are the characteristics of a great Science Fiction question?
10
Questions about science fiction technologies that have real world origins
8
What is the most viewed question on Science Fiction?
9
List of all entries on the Community Blog
1
Why was this Infinity Stone question about Thanos closed as duplicate?