Does it ever seem like answering story identification questions quickly nets less reputation?

Possibly germane to the question: Is it good that Story Identification questions are so well rewarded?

I'm not really complaining overall, but I've noticed a slight trend in that story questions which are answered shortly after being asked, no matter how obscure, get fewer upvotes than a more long-standing question. If this isn't perceptual bias on my part, I suspect that this might be a case of that people tend to ignore questions that already have an accepted answer while they're more likely to click into ones that don't seem settled, and thus more likely to feel obliged to drop an upvote for a good question or good answer. Alternately, it might be a matter of perceived effort, that an identification answered quickly must be an easy question and therefore not worth upvoting versus someone who answers a question that has sat on the server for over a month without a conclusive answer.

Ultimately, I'm largely curious as to whether this is something that other people see.

Using a variant of a query I used in a similar answer, we can compare the average answer score of ID questions to our other top tags. I compared our top 10 tags1: 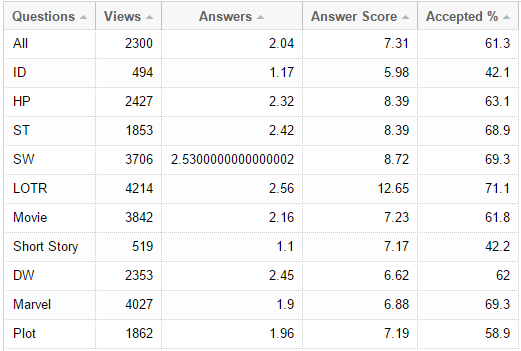 Answers to ID questions (which encompasses all of our *-identification tags) have a substantially lower score than our other top tags, and are also much less likely to be accepted. What I find interesting is that short-stories are scored so high relative to the ID questions. We can go a little deeper to look at these stats for ID tags and a selection of the most popular "category" tags:

We can see that short-stories is a significant outlier2..

Although there are always going to be outliers in both directions:

Statistically, answering ID questions is one of the least-effective ways to gain rep3, unless your only area of expertise is obscure non-English literature.

Sort of. Yes, average answer score decreases the longer after the question it was posted; No, answering old ID questions won't net you less reputation than answering any other kind of old question.

I wrote a query to compare exactly this, for the top five tags (left graph shows up to a year out, right shows only 30 days):

Personally, I suspect the spike on day-0 answers is at least partially due to the HNQ feedback loop:

Anecdotally, this is exactly what happened to me on my top four ID answers: Who are these Lego superheroes?, Millionaire man's brain implanted into female secretary's body, Who is this goblin with a teapot on a stick?, and When did William Shatner have a relationship with Joan Collins in the 1930's?. All four of them were easy IDs, and several of them had titles ripe for clicking ("William Shatner and Joan Collins?!? Hellz yeah!"). The HNQ list strikes again.

1 This probably wasn't entirely fair of me, since most short-story questions, and a fair proportion of movie questions, are also story-identification. But you can make that argument about a few of the top tags, and that's before getting into questions like "should I include star-trek-tng as well as star-trek?". I figrued this was easier than justifying which tags I'd cherry-picked.

2 Note that my first query counted any question with short-stories as a "Short story" question. This second one counts short-stories and an ID tag; that drops the average answer score, but not by much. The same thing happened with movie, but had a much larger effect; considering movie is often used on all manner of questions, this isn't surprising

3 Unless you're Kyle Hale, who has earned 4,415 rep from a single answer (at time of writing), or user14111, who answers pretty much nothing else

Doesn't seem that way to me. The most upvotes I ever got for an answer was this one which I answered 5 minutes after it was posted; I got 59 upvotes for being faster than the thousand other users who knew it. On the other hand, I got a grand total of 1 upvote for answering this one after it had been lying around for 2 years and 7 months. (The question has 833 views and 10 net upvotes.)

I guess the way to get the most upvotes is to identify a popular story by a popular author.

Update: I just posted the answer to an unsolved story-id question from September of 2011. Waiting for a tidal wave of upvotes. :)

TL&DR version:
Yes; you are right. But it's only true with some questions; the recognizable spawn of popular / major franchises can overcome this effect, making it hard to see.

Long version:
I have to agree with you. It's a bit difficult to see in some cases, but it's something I've noticed as well.

I suspect it has to do with the obscurity of the specific question -- ask a question that has an element that people recognize, and you will have many views, even once it's answered, as people are interested in seeing how someone answered something they feel they know a lot about. More views means more chances to vote. The more of an opinion they have about the subject, the more likely they are to vote. Star Wars is a good example. As is Harry Potter. Or almost any major franchise.

Ask a question, however, that has little recognizable detail in the title and, once it's answered, unless it is very intriguing sounding, a lot of people won't bother to look at it.

Again, in each case, there just wasn't a lot to draw the average person in -- mostly (and I recognize that this is NOT true of many of the regulars here), the less serious visitors are interested several things:

When you get outside of that range, there is a lot less viewing, less emotional involvement with any of the answers when they DO read them, and less of an inclination to bother to vote.

Each of these, like the previous (low-vote) examples, was a first answer, and the accepted answer.

[Edit] Richard's comment above fits with this perfectly; " My top post is about Hogwarts students shagging. I guess eventually you just have to throw your hands in the air and say "what the hell?"" -- Harry Potter (Major Franchise) + Sex (everyone feels themselves to be at least knowledgeable) == Profit! (well, Rep, anyway.)
[/Edit]

I think providing a quick and accepted answer isn't necessarily poison with regards to getting votes.. But with less known/broad topics, an open question is just more interesting, as there is a possibly you may answer it. Something you don't know about, and is already answered? To many, if not most, it becomes a 'Why Bother?'

(Again, I must stress -- for those who have been here for a long time, much of what I'm saying is not true... But the vast volume of views and votes isn't coming from us.)

When considering votes that a question receives after an answer has been accepted, it comes down to whether anyone else has a similar question.

If I have a question, I search for it, find it has already been answered, so upvote the question and the answer.

Similarly, I have collected upvotes on posts (on other SE sites) months after the post was made.

With story identification questions, maybe people don't recognise other questions as being the same story, all recollections are different. Therefore, this type of continuing upvote won't happen.

Even so, what it comes down to is: you can't expect to receive any votes for anything. Take what comes and be happy.

I would say that maybe your right, but I would also say that a question that is answered immediately after a question is posted would get the most votes, potentially. This doesn't have to be a rule, but these are my reasons:

Reasons that answers, posted after would get more up-votes would be:

Other reasons could be: who uses pictures?, who's answer is longer?, who's answer is more detailed?. I would say newer answers and older answers have about the same rate of getting votes. It all comes down to your research and how you expose your answer.

An example of a newer answer getting more votes due to better examples:

Trying to identify “I will measure the dust” story

An example of the older answer getting more votes:

Book about a man on a space station who sees himself

In both examples the top voted answers showed that the users had given better descriptions.

I would say that yes, you are right. But I would also say that every type of question suffers from this problem.

It's related to the fastest gun in the west problem - answers that are easy to provide (For the answering party) and quickily provided that then get accepted 'block out' interest in providing answers to the question, because the question is already 'finished'. As a result, the question gets less attention and fewer upvotes are awarded to the asker/answerer.

This is compounded by the nature of Identification Questions - once the answer is provided, potential answerers see that the answer is already there, and move on without looking at or upvoting the answer/question. Where in a normal question the answerer might think they still have a chance to provide a unique answer to the question, for an Identification question there is usually only one 'correct' answer, so a casual observer would skip past it and not bother trying to answer at all.

I don't see this as a huge problem - asker and answerer are already rewarded with an accepted answer (the asker presumably is happy with their answer, which in itself should be a reward) and despite the lack of 'additional' upvotes, the question is resolved with no further input required It might reduce the reward for answering quickly, but that's the risk you run when you're quick to the draw.