How should we handle questions that are easily answered by Wikipedia? [duplicate]

What should we do?

Please can we establish a rule for this.

Note: if you don't agree with one of my examples above write it in the comments by all means but note that this question is about the principle of what we should do.

I think that all questions should pass the following test: 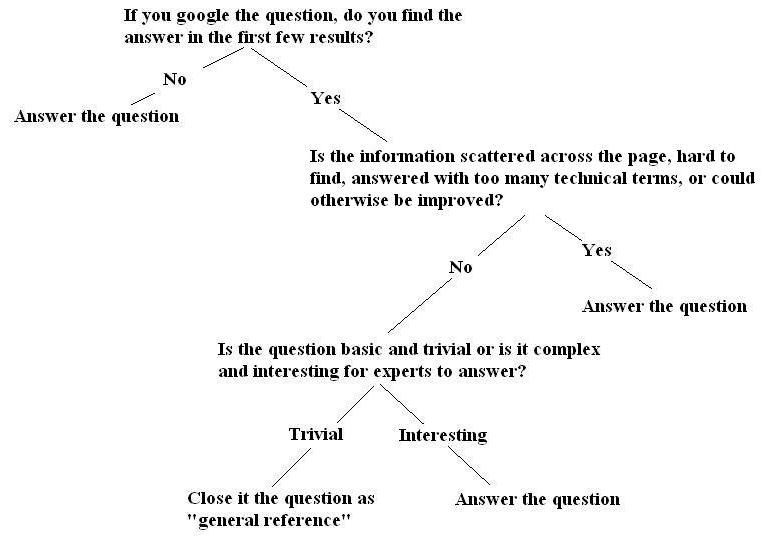 When it says "close as 'general reference'", it's referring to this possibly new close option that Jeff brought up. Until it's implemented, or if it's not implemented, read that as "close as "off-topic.'"

Joel was always of the opinion for Stackoverflow that asking and answering questions found easily found elsewhere was perfectly fine, in fact encouraged, as it made SO a more comprehensive compendium of knowledge

There is now a new experimental close reason, as previously discussed:

This question is too basic; it can be definitively and permanently answered by a single link to a standard internet reference source designed specifically to find that type of information.

Give that a try; we're evaluating the results. Also refer to the blog post on the topic with its handy chart:

The problem with those question is not only about the fact that they could be answered by Wikipedia, it's about the nature of the question.

I think that a combination of option 3 followed by option 1 or 2 would be best.

Anyone can Google for the answer, so people (should) come here with the idea of getting an expert or group opinion, along with sparking some discussions which defend or prove an answer. That implies option 3, right? Maybe to back up your answer you can post a link as a reference... like a "Would you like to learn more?" thing.

Not the answer you're looking for? Browse other questions tagged discussion general-reference .

30
Should we burninate General Reference?
75
The many memes of SFF.SE
30
What questions are on-topic, and what questions are off-topic?
21
Should "trivially easy to find" be a benchmark for moderating the site?
23
Are Google-able questions appropriate?
12
What should I do with a question on a book whose answer I find by "reading with more attention"?
9
Culling list and recommendation questions
4
If one of the Answerama winners' questions gets closed, what should happen?
9
Is the answer appearing in the first few results of a Google search sufficient basis for a *potential* General Reference closure?
17
Is general reference used inconsistently?
See more linked questions

5
How to answer a spotted cross-site duplicate?
13
When and why was the Bombadil question deleted?
9
Is the answer appearing in the first few results of a Google search sufficient basis for a *potential* General Reference closure?
21
How should we handle tag hierarchies?
8
How should link only answers be flagged here?
29
How should we handle questions that are about non-SF/F elements in a SF/F work?
8
Should posts that have more than one question be closed as "Too Broad" or "Unclear"?