What should be our Off-Topic reasons?

Changes are coming to the Question Closing system. The existing Vote To Close reasons are being overhauled. We've already seen some of these changes in the Duplicate Question area. That link above has a full rundown of the changes, and I recommend reading it, but this question is for one specific area:

5. Off-topic closures will include feedback on what specifically is off-topic for that site. (new)

Reasons will need to be specific enough to make it clear to most readers what is and is not allowed (off-topic reasons of the form "Things that are NOT X" will be discouraged).

This is also the place to address any closing reason that applies to one site but not others (for instance, the "General Reference" close reason on English Language and Usage is moving here).

So, what should our site's Off-topic close reasons be? Please only post one per answer. 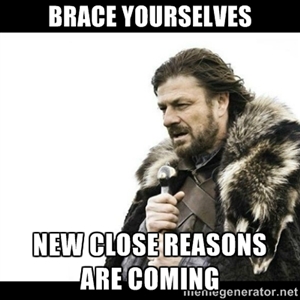 The main non-obvious question type that is about SF but isn't accepted here is lists and recommendations. (Two types really, but they have similar problems.)

This question does not pertain to Science Fiction or Fantasy

We've gotten a couple that would fall under this:

Questions about religious texts which are asked from the assumption that said text is "fiction" are off-topic.

(frankly, i'm half a mind to NOT consider that offtopic, instead closing such things as "Not Constructive")

Reference: Why was this question about the Old Testament closed as off-topic?

Examples: "is X Science Fiction"? "Is Y SciFi or Fantasy?"

References: Should questions about "Is X science fiction" be off-topic?

I've two suggestions but I'm going to limit them to one per answer as requested. Here's the first.

Speculation on future events of a work-in-progress series

In both of these cases, the question is totally impossible to answer for the simple reasons that (question 1) we don't know yet, and (question 2) it's based on an as-yet-to-be confirmed or denied fan theory.

Looking through the new list of close reasons, I can see that "primarily opinion-based" may also be viewed as an option for either of these, but I believe that "off topic" is more suitable because they're relating to things we don't know about the series yet (and in the latter case may never know). Because of that they encourage discussions, speculation about the future course of the series, arguments, theorizing, etc, which are squarely off-topic for a Q&A site. These two questions can't even solicit opinions; "an opinion is a belief about matters commonly considered to be subjective", and they don't even go that far.

2
Why was this question about the Old Testament closed as off-topic?
26
I haven't read the book/watched the movie/... May I ask a question about it?
9
Should questions about "Is X science fiction" be off-topic?
12
What should I do with a question on a book whose answer I find by "reading with more attention"?
5
Are real world speculation questions still on topic?
2
When and why did the flag reason change?
-1
Incomplete choice list when I vote to close
-1
Are we allowed to change our custom "off topic" VTC options?
-1
Why was this question not closed/reopened?

// TODO sg: TMP solution until we are confident in our current implementation of async imports // once we are, we can move the if into the js entry file and dynamically load the mark obsolete module