Should I delete my account due to harassment from a high-rep user?

Ever since I downvoted one of DVK's questions and voted to close I've been harassed pretty much non stop.

First it was serial downvoting in an attempt to get me to retaliate. (see reputation changes for myself and DVK on Feb 19)

Now, every answer I make gets either a bunch of rude comments or starts a debate on meta:

Is there a canon explanation for why Star Trek ships bank when turning?

How to comment on "There is no in-universe answer"/"plot hole" answers lacking any evidence?

Are clear-consensus meta discussions completely irrelevant unless they are in FAQ?

If this was a workplace I'd be talking to the HR department at this point because this is unacceptable.

Or I can start a meta discussion

I'm going to answer this in generalities, to avoid sharing any confidential information.

If you believe you are a victim of some form of abuse from any user, the correct thing to do is to bring it to a mod's attention. It doesn't matter what the reputation of the user is. There is a reason why moderators have some privileges that even the highest users don't have. This is one of such reasons. It has happened before that the highest-reputation user of a site was temporarily banned. It has happened before that a moderator was banned. So don't hesitate to flag rude behavior or rules violations, no matter who the user is (you might prefer to contact Stack Exchange staff if a moderator is involved, but other than such exceptional cases, such issues are handled by site moderators).

Meta discussions on the subject might work, but for something like this, you are better off either catching a mod's attention in chat (They can open up a private room), or simply flag an example of what you believe is abuse, and mention that there are repeated examples. You can also contact the stack exchange staff directly via the "Contact Us" site.

I'll add this in for completion as well. If you ever have a major issue with a moderator, then your best bet is to contact stack exchange directly. This is only if you believe they are harassing you, or other similar, and should not be used for where you dispute a policy they are enforcing, which should be posted on meta.

Well, first off: you should delete your account if you want to relinquish control over everything you've posted, wish see it all anonymized and disassociated, and don't wish to have any of the privileges here that your reputation grants you. Because that's what deletion actually does. If you just want to stop using the site, closing this browser window is a much more expedient way to do that.

Moving on, I'm saddened to see this is still happening. Last I heard, you'd both been bickering here on Meta, resulting in moderators having to delete several nonconstructive comments and the invalidation of a fair number of down-votes. Votes which, I should note, went both directions.

"A bunch of rude comments" turns out to be about 7 comments out of 40 or so posted elsewhere. In one case DVK was chided publicly by a moderator for being rude, which seems to work against your argument that mods won't say anything to high-rep users.

There's absolutely nothing wrong with bringing a disagreement here to Meta for resolution; that's one of the purposes that Meta is here to serve. It's generally considered impolite to "call someone out", but if you feel your behavior is being discussed behind your back then that's a valid concern - meta discussions relevant to a specific post elsewhere should have a link in the comment discussion there.

Frankly, I think you've both been a bit too passive-aggressive about this whole thing. DVK didn't need to take offense in the first place, you didn't need to retaliate, both of you should've just dropped it after being warned the first time instead of swapping roles and starting over again.

I suggest you get a nice hot cup of tea, relax a bit, and then jump into chat and try to work out whatever's bugging you. Invite a moderator in to moderate if need-be.

And then get back to actually discussing these topics honestly instead of using them or interpreting them as thinly-veiled attacks.

When I was a new user I had some concerns about propriety and I didn't know what to do about it, hence my meta post. Gilles was able to talk to me privately about my concerns and I came out of that conversation feeling informed and ready to continue participating. It's not clear from your question whether you've tried to speak with a moderator or not.

Pearsonartphoto is correct -- moderators have privileges that users do not, no matter the reputation of a given user. At its core, reputation is merely a measurement of 1) participation, 2) knowledge of canon(s), and 3) the ability of a user to ask and answer questions.

Pearsonartphoto also makes an important point when he notes that some of the highest rep users have been duly disciplined.

Last summer I was concerned I had a serial downvoter. An SE community liaison looked into it for me, and guess what? I was totally wrong. I did not have a serial downvoter. The scripts SE runs, looking for serial downvoting, are pretty consistent -- they catch serial upvoting, too (and strip points accordingly): 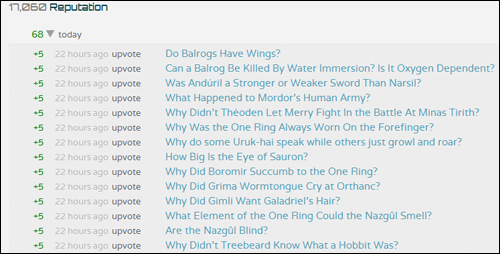 (I don't have a screenshot of the reversal, sorry.)

I don't think there's anything wrong with a user's answer spawning a meta question. Surely not every answer you've ever given on SFF.se has resulted in a meta question? I mean, you've waded into meta with this very question, where you call out a specific user. If meta spawning from your questions isn't okay, do you think this is? I'm asking, not making a judgment statement. But I think it's important to think about what the purpose of meta is -- I do understand the feeling of not knowing where to go or who to ask about a problem -- I get that, I do.

A user always has the choice to delete their account, for whatever reason. Only you can decide whether that's the right decision for you. Personally, I tend to believe that things usually work themselves out in the end.

-1
Does high reputation allow a user to be rude? Or mean that a user need not follow the rules?
12
Who Do I Contact About Concerns I Have Regarding Moderation?
6
Are clear-consensus meta discussions completely irrelevant unless they are in FAQ?
6
Who is the community liaison for SFF from SE?
5
When should I be worried about rep increases?
12
How to comment on "There is no in-universe answer"/"plot hole" answers lacking any evidence?

6
Should high-rep users vote to delete bad closed questions?
17
Should we delete incorrect answers to story identification questions?
10
Should I delete my (accepted) answer?
7
Should we delete "plot-explanation" tag?
16
Should we have official moderator notes "obsolete due to new canon"?
14
User vandalised their account before rage-quitting. How best to resolve?
6
Will a bounty still be active even if the user who started it deletes their account?