Is there a point at which someone should start getting paranoid about serial downvoting?

Is there a point where someone can conclude that they are being serially down-voted without being an outright paranoid?

These are 5 out of 6 questions I posted in the last 24 hours. One can be counted as statistical noise (it has 3 other DVs), but the fact that this ALSO coincided with the day when I stood up for myself against what I see an unjustified VTC makes it suspicious.

This isn't the first time I get a bouts of 2-4 question downvotes with no comments in the span of 5-15 minutes. But I think 5 in a row is more of grounds to be suspicious of people than of statistics.

Here's another couple of samples from my old emails when I noticed it happening:

Just to be clear, I'm merely asking for an opinion (or rather, facts to confirm that this is a "normal" pattern). I don't have any particular desire to ask SE to investigate it. Just want to know if other people experience this frequently (e.g. 3+ downvotes in an hour, or 4+ a day) on disparate questions - and never on answers - with any regularity (couple of times a month).

I also had a more fun pattern where someone was DVing 1-2 questions a day, every day, for many days. Always within one of two 1-hour periods during the day.

Anyone still think I'm a paranoid who only cares about rep?

I really don't see the problem. A single user could cause you to loose at most 546 rep this way (right now). That seems to be what you gain about every two to three days! Note that sock-puppets do not count: You need at least 125 rep to even cast down votes.

Reputation is a number. It doesn't even cost you anything to increment other people's rep count. And above 20k it doesn't even change anything you can do (correct me if I'm wrong). There's no way you will be reduced to this unless the number of serial downvoters times the number of your questions surpasses 15000.

Since you seem to take this really personally, I'll do my best to cheer you up; Here's a picture of a cute kitty: 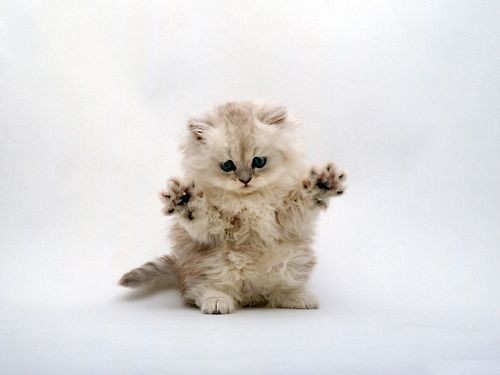 To answer your direct question, you should be concerned with voting discrepencies when you see several posts on the same day voted within seconds of each other—indicating someone is going down the list of your posts in your profile and down-voting—or when you see multiple "serial down/upvoting reversed notices" on your reputation graph (like the serial upvoting reversal you had on April 4th).

If you ever have a concern that something is going on, asking SE—either by emailing them or through the moderators—is the best way to get it handled, as they have far better tools than are publicly available, and have seen real serial-voting occur enough times to know when it's a real problem or when it's just the result of confirmation bias.

To that point, Izkata's queries are inaccurate, the analysis is flawed, and there's very little evidence of the conclusion reached (that you have a stalker).

To demonstrate the flaws with Izkata's queries, rather than construct a query ex nihilo, I looked at your actual reputation changes as publicly available on your user profile. Looking at January, you had 30 downvotes, 3 of which were reversed, on 15 posts and 13 days:

Assuming the hypothetical stalker exists and was party to down-votes on every one of those posts, only two days (1/19 and 1/20) had multiple posts down-voted: that's not serial down-voting.

And, of the 15 posts highlighted here, 8 received multiple downvotes, indicating that multiple people thought there was a problem with the post. This leaves 7 posts on the following days:

The differences between the days when you received solitary down-votes are 6 days, 6 days, 1 day, 7 days, 3 days. But let's look at your posts on those days. These are the posts you created the day you got down-voted, indicating someone saw it as it was posted or on the front page (i.e., they didn't need to go digging for things of yours to down-vote):

Given that all of your posts in January can be explained by normal voting activity: what's more likely: a "stalker" was meticuously and diabolically down-voting in such a way as to be virtually undetectable, or that the down-votes you received are the result of your posting activity (high post volume combined with multiple controversial posts)?

But maybe that's just January. According to Izkata's post, that's when this all started: maybe the stalker was just learning the ropes. Let's look at August, the last full month, and one that Izkata's post doesn't touch. You had 23 downvotes (no reversals) on 19 posts and 15 days:

Of those posts, these are the posts you created the day you got down-voted:

These are the posts from your back catalog that were down-voted "out of the blue":

At the same time:

That's interesting: down-votes went up but your posting activity went down. Does this mean there really is a stalker? Perhaps, but again, the evidence doesn't entail that conclusion. All but two posts can be accounted for by normal voting activity: you posted, and either the post received multiple down-votes or someone saw that post as it came up and decided then and there that the post wasn't useful.

And what of the increased "normal" down-voting on your posts during this time period? It could be explained by a stalker now following your posts as you make them and down-voting them, but you were only down-voted on 15 of the 28 days you posted. Was the stalker just lazy? Even more diabolical than previously thought?

Now let's take a look at something a stalker/serial-downvoter has no control over: the number of up-votes you received.

The percentages look pretty much even, proportional to the number of down-votes you received, but the number of upvotes you received during the two months actually dropped by 37%, which is substantially higher than the 23% drop in down-votes. The community in general was just more lukewarm to your posts, particulary to your back catalog, in August than they were in January. While a conspiracy orchestrated by the hypothetical stalker is possible, I offer a few alternative suggestions:

To conclude, while there's no definitive proof that a stalker doesn't exist, I do think you're being a little paranoid. There is evidence, proportionally speaking, that your posts are doing worse than they did several months ago, but there's very little evidence one person, or even a few people, are the ones causing it, and the decrease in overall performance of your posts is more due to less up-voting than more down-voting.

You have literally hundreds upon hundreds of posts, and nobody can bat a thousand. Try not to sweat the small stuff. Look at kitties instead: 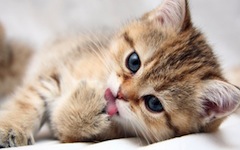 I am of the opinion that DVK may well have a stalker of some sort. After plugging in several users to a query I came up with earlier tonight, the pattern of DVK's downvotes do indeed look very weird, especially when compared to some of the other top users.

Of the entire first page of users (that's 36 accounts) with the highest rep, no one else has gotten 10 or more downvotes in a single month. Examples of more normal numbers of downvotes (still from the first page) would be Jeff, Keen, Xantec, or myself.

Data up through June is currently all that's available. The queries will update when data becomes available, but this answer may not be updated when that happens.

EDIT: I should point out that the query being used in this post is attempting to single out posts so that a stalker can be more easily identified - many downvotes on one post on the same date would count as 1, not the number of downvotes, since each user can only downvote a post once. Using this query for total downvotes shows basically the same patterns.

5
Am I being singled out by a grumpy downvoter?

13
Should I flag "Why all the Downvotes" comments as obsolete?
3
Why are there so many deleted posts made on 2015-08-22?
13
I asked a dumb question, now what do I do about it?
19
Are we allowed to ASK about the reason for downvotes?
7
Why was my flag on an obsolete "add this tag" comment declined?
19
Inactive Moderators (Again)