Last year (2020) saw some changes to the question closure system across the SE network. These included changing the text saying "off-topic" in custom close reasons to "a community-specific reason", which inspired the SFF community to reach a consensus to create a new custom close reason for our well-established Future Works Policy. Essentially, this policy states that if a question is asking specifically about a book/film/episode/comic/etc. that has not yet been released, the question should be closed at least until the release date, to prevent purely speculative answers. (A 2018 clarification ensures that questions about already-released works, even if the answer is unknown and may be in future works, do not fall under the Future Works Policy.)

Rather late, but this meta post is to confirm the wording for the new proposed custom close reason. Note that another of SE's 2020 changes to the question closure system was introducing audience-specific texts for custom close reasons, so that the OP, close voters, privileged users, and the general public can all get slightly different versions of the same essential explanation of why a question is unsuitable for the site. That means we need to write up five different texts and include them when the mod team actually creates the new close reason.

This time, we don't need CM help, as mods can create new close reasons, just not edit existing ones in place. So I'm just going to draft up a set of wordings, get meta feedback and approval, and then we can create the close reason any time.

TL;DR: please read my answer below to check the proposed wordings. 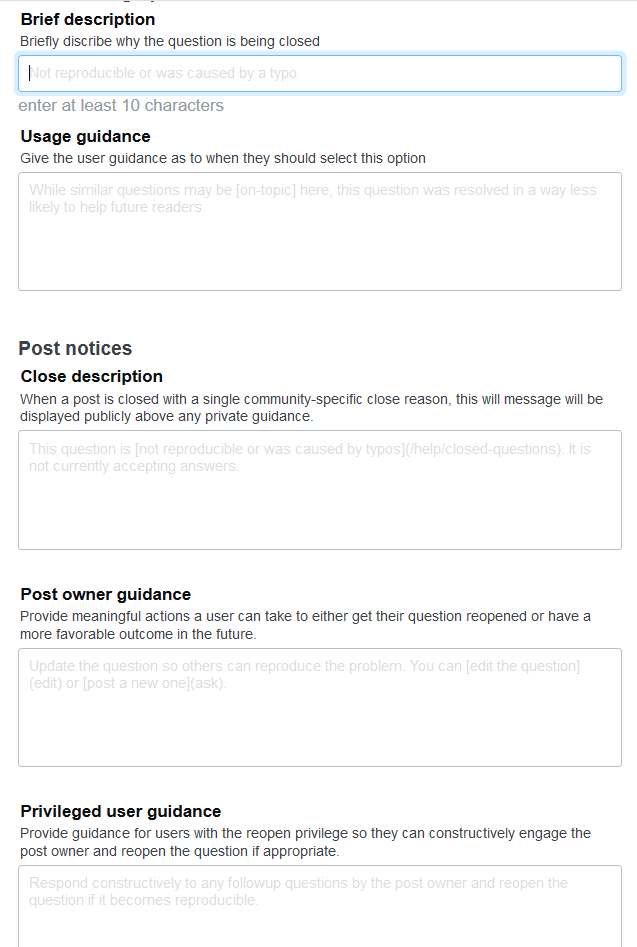 The name shown to flaggers/close-voters when seeking an option in the close menu (currently 21/100 characters):

The description shown to flaggers/close-voters after choosing this close reason (currently 485/500 characters):

This question is about future works. Any answers would be purely speculative, since the question concerns some as yet unreleased material and cannot be resolved until its release. Note that this close reason does not apply if an answer can be written based on already released information. For more details, see Should questions about future works be closed? and What are future works?.

The text shown to everybody, even non-users, viewing the closed question (currently 144/500 characters):

This question was closed for being about future works. It is currently not accepting answers.

The more detailed text shown, under the general close description, to the OP only when viewing their closed question (currently 496/500 characters):

Your question appears to be about a work of science fiction or fantasy which hasn't been released yet. If you can ask purely within the scope of already released works or existing pre-release information, then please edit to clarify. Otherwise, your question can only be reopened after the release date of the work you're asking about. For more information, please see this FAQ and its refinement.

Please check whether the work being asked about has been released since this question's closure, and vote to reopen if so. If the question can be phrased specifically so that it can be answered in the context of already released information, then please consider making an edit or guiding the asker in how to do so, or vote to reopen if it's already phrased in such a way.

Not the answer you're looking for? Browse other questions tagged discussion status-completed closing-questions .