Are stories set in settings that do not exist, yet which otherwise have no magical or speculative elements, on topic?

I thought this had been discussed before, but I can't seem to find a meta question about it.

There was a story-identification question today, to which the answer was Lloyd's Alexander's Westmark series, Identifying young-adult fantasy trilogy —while the only previous mention of Westmark I could find on the site was this question I asked myself, about the similarity of the Westmark novels to one of the author's earlier fantasy novels, Did Lloyd Alexander ever discuss the relationship between his novels, The Marvelous Misadventures of Sebastian and Westmark

I had a spirited debate with a librarian at my middle school about whether Westmark was a fantasy novel, and we did not come to an agreement. On the one hand, there are no magical or speculative elements in the trilogy. It is a series of stories about the society, politics, and military ventures characteristic of eighteenth-century or early-nineteenth-century Europe—except that all the countries and personages involved are fictitious. Is the fictitious setting enough to make this series on topic?

There are other settings that have little to no overt magic or science fiction elements that seem (to me) more obviously on topic. For example, the Gormenghast books have (aside from some definite science fiction elmenents in Titus Alone) things that are quite explicitly unlike anything in the real world—to the point of being physically impossible, such as the titular city-sized castle, which is both somehow scores of stories tall, and yet still can be almost completely flooded in a rainstorm).

However, the Westmark books are not in this category. There is nothing about the story that I would call "fantastical." There is only the fact that the countries involved happen not to have ever existed.

This is actually an incredibly hard question to answer; I'm not even sure if we'd be able to come up with a good general answer. After all, what counts as science fiction has been debated many times in the past, with Moorcock including stories in New Worlds that might not otherwise have been considered SF. (Indeed we've had that exact discussion.) Ultimately, I think that we largely can't have a useful discussion of the general case, and we'll need to consider contentious works individually.

Fantasy is a genre of speculative fiction set in a fictional universe, often inspired by real world myth and folklore.

and, for comparison, defines science fiction as:

Science fiction (sometimes shortened to sci-fi or SF) is a genre of speculative fiction that typically deals with imaginative and futuristic concepts such as advanced science and technology, space exploration, time travel, parallel universes, and extraterrestrial life.

Both of which essentially hang a definition off of "speculative fiction," so let's look at that:

Speculative fiction is a broad category of fiction encompassing genres with certain elements that do not exist in terms of the recorded history and observed phenomena of the current universe, covering various themes in the context of the supernatural, futuristic, and many other imaginative topics. Under this umbrella category, the genres include, but are not limited to, science fiction, fantasy, horror, superhero fiction, alternate history, utopian and dystopian fiction, and supernatural fiction, as well as combinations thereof (e.g. science fantasy).

This list is actually fairly close to what we consider on topic, including superheroes, dystopias and alternate histories. Note, though, that we explicitly exclude certain sub-genres (such as spy-fi) which doesn't help matters.

I found an interesting blog post about how various genres relate to "speculative fiction," even discussing how some science fiction is not speculative fiction, and how what is science fiction today may not be science fiction tomorrow. (Which, I must note, is another discussion that we periodically have here!) Actually, the same might be said of fantasy, if we reach back far enough to a time where a story might include intervention from an angel or a saint - things which were part of the accepted worldview at the time, but which are now purely fantastic elements to us.

This post asserts that some stories that don't contain any speculative elements (well, other than the basic "what if?" used to construct the scenario) can still be science fiction. I'm not sure we can argue with that; for example, what if the crew of the ISS needed to escape a disaster and lost their re-entry vehicle? Is someone going to argue that Gravity isn't science fiction?

(Editorializing slightly, part of the problem is that we're trying to define the boundaries of a genre that exists, in large part, to challenge bounds.)

I think an absolutely excellent example of "fictional setting, but essentially historical" is The Lions of Al-Rassan by Guy Gavriel Kay, which is explicitly modeled on Moorish Spain and contains no overtly fantastical elements. Nevertheless, as it is by a known fantasy author most of whose modern work has very toned-down fantastical elements (basically just some ghosts in Under Heaven), it would be considered a work of fantasy. (One might argue that simply applying somewhat modern sensibilities to characters in the 13th century is ahistorical enough to count as fantastical.)

On the science fiction side, a comparable borderline example might be Spook Country, which is essentially a present-day thriller with no futuristic elements, invented places, etc., but is written by William Gibson in a way that nevertheless makes it feel like science fiction.

I don't believe it's possible to have a hard-and-fast rule about what is, and what is not, Fantasy. I think to some extent we have to rely on the author's intent to portray a world that is, or is not, ours - to whatever extent we can discern that. We can also use the author and/or the publisher as cues. In some cases it might simply be that we have to defer to a poster's belief that a work is fantasy, or we may need to discuss an individual work here.

(I've been told by people more widely read than I that there is a distinctive style or pattern to most SF that "feels" different to non-genre writings, but I don't think I'm aware enough of that to use it as a criterion.)

You say, It is a series of stories about the society, politics, and military ventures characteristic of eighteenth-century or early-nineteenth-century Europe—except that all the countries and personages involved are fictitious.

Well one could argue that Star Wars is about the society, politics, and military ventures characteristic of mid to late 1900's Europe except that all the countries and personages involved are fictitious. The fictitious local just happens to be space.

Where do we draw the line about "how made up" something needs to be before it is considered science fiction or fantasy. I think we tend to have loose definition here that we call "speculative fiction". I came across this nice write up (with a fun Venn diagram) on what speculative fiction is. 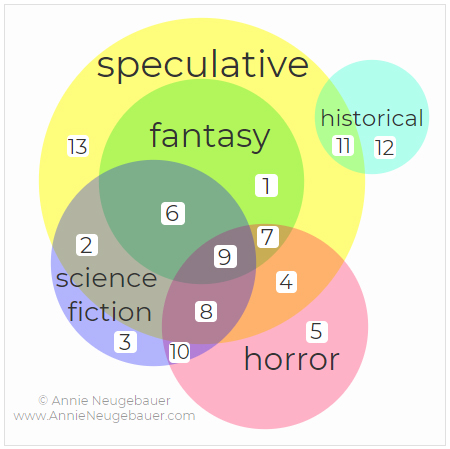 For me, when an author has created an entirely new world, no matter how mundane the stories told in that world, it is a form of fantasy.

Now of course we are always going to have outliers, which is why we have meta.

Not the answer you're looking for? Browse other questions tagged discussion specific-question closing-questions .

45
Are works that aren't SF per se, but have occasional SFnal elements on-topic? (e.g. spy movies)

6
Doubt about a closure
5
Are questions about when stories are set not fit for Sci-fi & Fantasy SE?
16
Are works that may or may not just be dreams on topic?
9
Are all questions about games on-topic as long as they contain some SciFi or Fantasy element?
7
Are 'pure' horror works on topic? And if so, why?
11
Do we have to ask if all these works are on-topic or not?
9
Motion to re-define the [lucifer] and [sandman] tags!
19
Are stories that only appear to contain fantastical elements on topic?
10
Are stories that contain crackpot science and/or pseudoscience on topic?