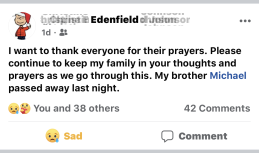 22
Tag Wars Episode I: Harry Potter and the Tag Cleanup
38
What is our actual policy on science questions?
-23
How can this question be duplicate (Also, please revoke diamond status of @Keen)?
24
Are *all* list questions off-topic?
14
Would we be interested in a concerted tag cleanup effort?
11
Look and feel of the new blog
12
What should we call our blog?
23
What is the correct usage of individual works tags vs. author tags vs. franchise tags?
19
Tag Wars: The Science Fiction/Fantasy Tag Cleanup Event
15
Official Unofficial Blog Support Post
See more linked questions

14
What is the best way to deal with complicated canon discrepancies when answering questions?
28
Goodbye, Affable Geek
51
Carrie Fisher has passed away
29
John Hurt has passed away
19
Diana Rigg who played Olenna Tyrell on Game of Thrones has passed away at the age of 82