Can we fix Wikia links before they break?

We've had the broken Memory Alpha-links fixed directly on the database. Thank you, @Shog9 and @Catija.

Can we do the same for all Wikia links, since wikia.com has moved to fandom.com? There's a redirect in place currently, but we don't know for how long. There are far too many links to Wikia to edit them all by hand.

Can we request an update directly on the db to fix these?

And if so, can we make change http to https for these links where necessary?

Unfortunately, while I recognize the importance of the change, there is not currently quite enough information here to proceed. This change affects ~28,000 links across the network. I am able to locate some official documentation about wikia.com's move to fandom.com, so I'm not worried about the majority of these cases. However, as TheLethalCarrot notes:

As was mentioned on the linked post apparently some moved to wikia.org not fandom.com.

There are a few open questions in my mind:

In part, I have these questions because the distribution of Wikia links is quite long-tailed. If there are problems migrating some subset of these Wikia links, that could be a problem. Just on scifi, this is the cumulative distribution of which wikis are referenced (click through for detailed chart): 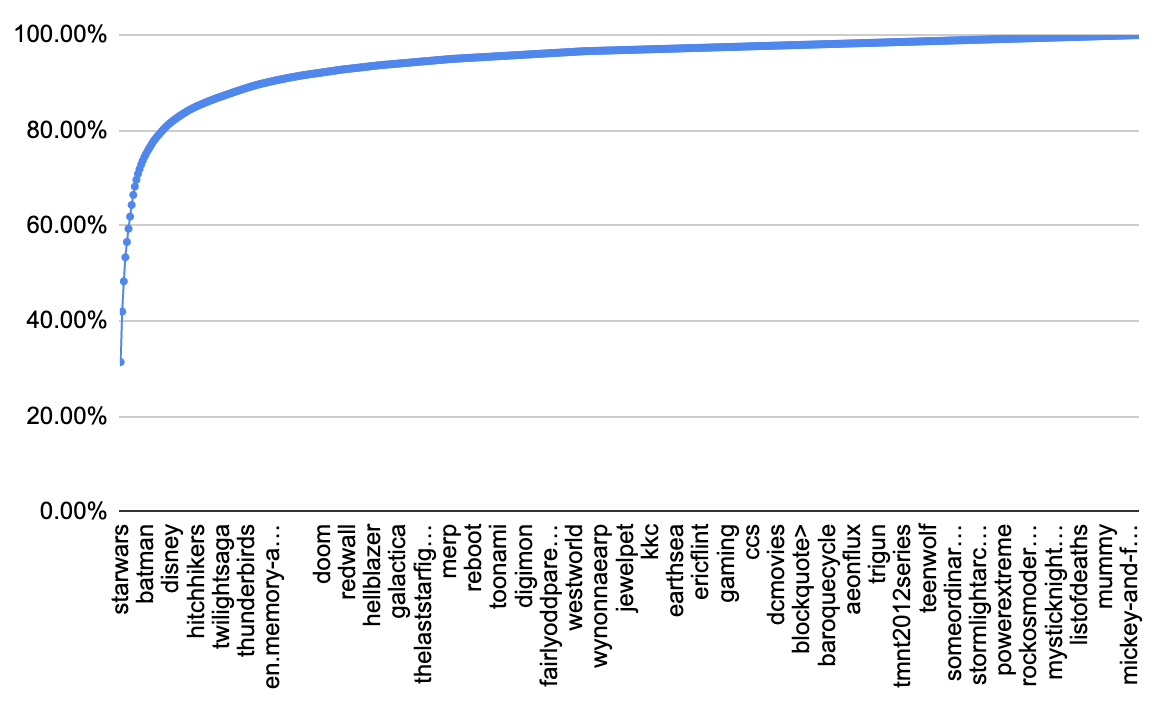 This is a quick and dirty query so there are a couple spurious entries, but still, it takes the top 93 wikis to cover ~90% of posts. 95% coverage raises that to 211 wikis. 99% coverage raises that further to 542 wikis. So it's not as though we're dealing with a tightly-clustered number of wikis... it's quite varied.

Though it's not strictly necessary for us to run the update network-wide, it's also worth noting it's quite long-tailed in the sites it could affect, and if run network wide it will change links on some sites folks might not otherwise expect:

In order to proceed with this change, we need to know:

The reason we need this information is because there's simply no going back. I mean it. After we hit that button, any reversion constitutes either a ton of developer work, or the collective work of the network to clean up all affected posts. And it may become very difficult to separate posts needing cleanup from posts that are OK as-is.

For smaller changes, this kind of post would be generally fine to proceed on and touch up later as needed. For a change affecting ~28,000 links across a half dozen sites, there simply is no reasonable way to reverse or correct this change if it is a mistake for any nontrivial number of links. So, we'll need to be sure that work was done to verify the change is non-breaking.

Once y'all have double checked and are sure this doesn't pose serious risks, mods: feel free to kick this back into status-review and we can take a look at it again.

Not the answer you're looking for? Browse other questions tagged support editing hyperlinks .

5
Links to illustrate questions that point to non-english websites?
12
Can you resize images in a question?
0
Dead Links, what to do with them?
15
My edits bump the question, can this be avoided?
16
Chakoteya.net links are broken
11
Is it time to organize a major editing event?
8
The Big Edit Event (is finished)
0
We need to fix [star-trek-enterprise] description
9
Can we fix broken Memory Alpha links?