Why was this Infinity Stone question about Thanos closed as duplicate?

EDIT: Duplicates are duplicates if and only if the QUESTIONS are the same.

Duplicates are duplicates if and only if the QUESTIONS are the same. (This is how every other SE site does it, by the way.) Otherwise, we're asking users to wade through a bunch of totally irrelevant information to find the one tidbit that's useful to them. Preventing that sort of exercise in frustration was the reason StackExchange was invented, folks.

Outline of the two questions

My question How does Thanos know how to use the Infinity Stones? [duplicate] I asked specifically asked about the "Time Stone" because, after "Dr Strange" we are told by Mordo that it takes more than a photographic memory to use the stone and that it requires training and an affinity for it. With that said in my question, I asked about how Thanos used it because you need training and practice to use it.

The duplicate question is this: How did Ronan use the power of the Infinity Stone once it was installed in his hammer?

The answer in the linked question is a good answer and I don't deny that it does have information about ultimately having Thanos wield all six of them with the gauntlet. This is the answer: 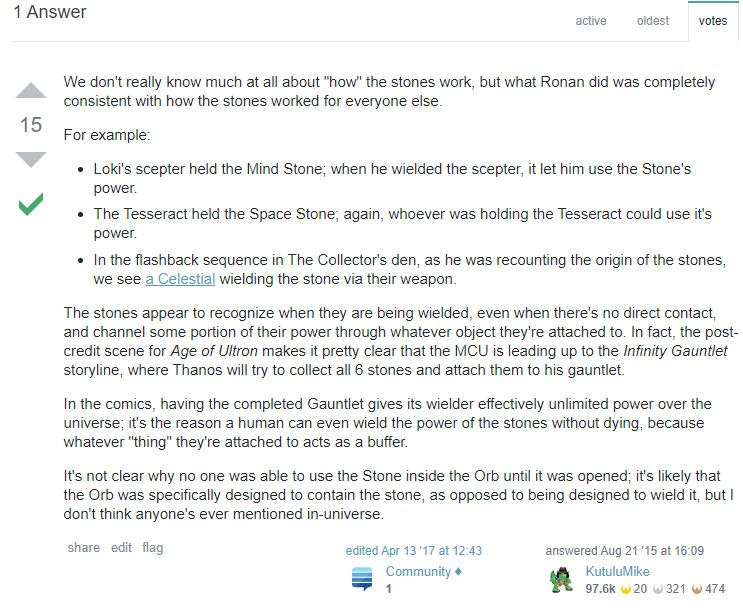 Since that question and answer there have been 12 MCU movies released with varying degrees of detailed explanations of the "Time Stones". Not to mention that I asked for in or out of universe answers and there has been quite a lot more revealed about the how the "Time Stones" work by various directors or writers. 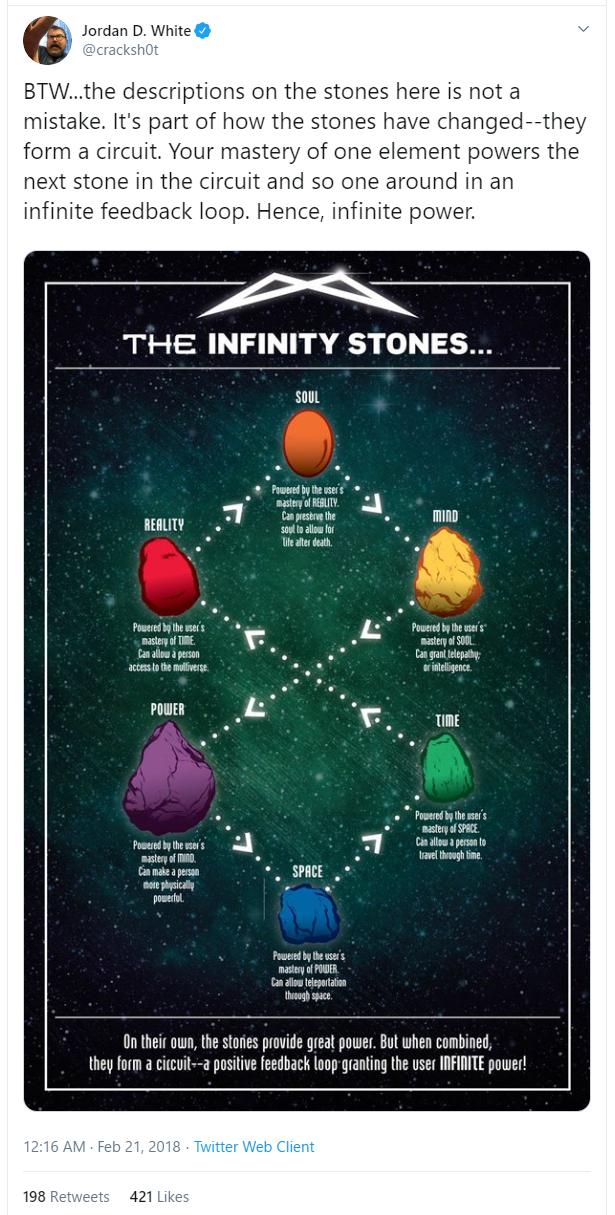 It seems there's a certain synergy between the Infinity Stones. Each Infinity Stone is actually powered by an individual's mastery of another.

The comics have long since established that Infinity Stones are drawn to one another. An individual who possesses one Infinity Stone can sense the presence of another. But it seems likely this "draw" will follow the same pattern; that the bearer of the Time Stone will be drawn to the Space Stone and to the Reality Stone, for example. In the comics, that means the various bearers of the Infinity Stones will be drawn into conflict with one another. In the movies, however, it may hint at just how powerful Thanos could become.

There is also a Reddit User who made a list of every time Thanos used an Infinity stone,

[IW SPOILERS] I was seeing all these posts everywhere on how Thanos used the stones in interesting ways. So I went through each and everyone of the scenes in which Thanos is there and came up with the following list. There are still something which I am not sure about, so I have mentioned that as well. It's a list of every time we see him use any of the stones.

On the Asgardian Ship

Power Stone - To torture Thor on the Asgardian Ship

Space Stone - To stop Loki from Stabbing him

Reality Stone - To change the Reality within Knowhere

Space and Power Stone - to torture Nebula yet again

Space Stone - To get to Vormir

Space Stone - to get to Titan

Power Stone - To attack Star Lord with energy beams (we dont see Thanos activating the stone, but we see pruple beams being fired towards Star Lord impliing that it was the Power Stone)

Power Stone - To knock out Star Lord, Drax and Nebula

Soul Stone - Once he has knocked out the three of them, we see the Soul stone being activated, possibly to protect Nebula's Soul? idk, wasnt clear

Space and Power Stones - To pull the moon towards titan

Soul and Power Stones - When Dr Strange does the spell to duplicate himself and restrain Thanos, Thanos uses the Soul Stone to figure out which one is the real Dr Strange, and the Power Stone to undo the spell and attack Strange

Space and Reality Stones - To pull Dr Strange towards him while also rotating the ground below, similar to what we have seen in the Dr Strange movie

Power Stone - To attack Iron Man with an energy beam

Power Stone - To shield the Gauntlet from Stark's energy beam

Power, Space, Reality and Soul Stones - He is about to do something to Stark, before Dr Strange saves him so we never really get to see what was about to happen, but he did activate all 4 of the stones which he had.

Space Stone - To get to Wakanda

Space Stone - To know out Falcon (we don't really see the space stone light up in this scene, but it seems like Thanos's hands are made into a fist, implying that he used a stone and before Falcon got knocked down there was a surge of blue energy)

Power Stone - To knock out Bucky

Power Stone - To deflect Okoye's spear and to throw her away

Reality Stone (edited) (or the Space Stone or both) - To knock black widow down and cover her up with rocks from the ground (It could be a combination of reality and space stone. There is a way we can know for sure. When Thanos uses the Reality stone on Drax and Mantis earlier, the affects are temporary. So if the rocks are back to their normal position in the next movie, it could be the reality stone. Else, it could be a combination of the reality and the space stone, or just the space stone)

All 6 Stones - To attack thor with an energy beam

Space, Soul, Time and Reality Stones - To leave Wakanda and pull out Storm Breaker from his chest, and possibly to heal the wound caused by it. He uses the time stone to reverse the injuries caused by Stormbreaker (I am not sure why he used Soul and the Reality stones. I am trying to watch it again and again in slow motion, it seems that he is using the 3 stones together for something, I am not entirely sure whether that is the case, and if it is, then what he is using them for)

Hopefully I've got them all, but let me know if I've missed any.

Conclusion There is so much more information about how Thanos was able to use the stones now, than there was 4 and a half years ago and I only posted two links, I am sure there is more. Bottom line, in the context of things, the fact that 4 and a half years have passed and that the duplicate question is "actually" asking how Ronan was able to use the "Power Stone", I think that there is no way that it was a duplicate. The question should have been allowed to play out as it could have made for some interesting answers.

Some food for thought

I know some people are going to say that if I did the research for this and came up with this information now, why did I not do that earlier?

Ok, let's say I did that for every question I have had and every other user did the same and was able to get some good information about what they want to kanow and in the did not need to post a question. Then why have this site at all? If the information is elsewhere why not go elsewhere. When I ask a question here it increases content by two ways: 1. It creates a question that others may have thought about, 2. it then creates answers about the question and therefore increasing the content on this site. And increasing content increases people visiting the site.

So I won't apologize for asking a question and defending it when it will benefit the site.

EDIT: This from the comments, but I am adding it to this question. This issue with posting in the original question is that when people search the web for how Thanos used the stones, the question titled "How did Ronan control the power stone" will not come up. Posting a new question clarifies the title and therefore will make it easier to come up in a search, which means more views for the site. Not mention that none of this will answer the question "How did Ronan control the power stone" as it only applies to how Thanos uses the stones, hence my insistence that this is a different question with different answers.

I've given this discussion some time, and examined everything objectively (i.e. without paying attention to who wrote what). There have been some spurious arguments put forward, and also some arguments that nobody has mentioned yet.

However, nobody has really mentioned how different the questions are from each other, not just in which characters they're talking about, but which aspects of stone usage.

The old question asks how Ronan can use the Power Stone without having physical contact with it. The answer duly addresses this aspect, focusing on how other characters have used the stones without touching them, as well as some later-realised speculation about Thanos potentially getting all the stones in the then-future.

The new question asks how Thanos can use the Time Stone when he only just acquired it. This is a separate issue from being able to use it without touching it, and the old answer doesn't really address that. The only relevant part of the old answer to this question is "We don't really know much at all about "how" the stones work", but of course if that was posted as an answer on its own it would be deleted as Very Low Quality. And we do know at least something by now about how they work, as the various comments and links have shown.

TL;DR: it's not a duplicate, but not for the reasons you say.

40
Why is the close-as-duplicate policy so aggressive, and should we change it?
-10
Who moderates the high end users?
0
Reopening Duplicated Question - Start creating Rules for tagging a question