Why is my question "Chronological order of Star Wars Literature" closed for lists of works/recommendations?

I have a question that has bothered me since my question, "Chronological Order of Star Wars Literature", was closed for being off topic. In the note about why it was closed there is this titbit of information, "Requests for lists of works or recommendations are off-topic as they do not fit our questions and answers format. Feel free to ask about people's favorites in chat." This bothers me because a) I wasn't asking favourites and b) I was asking for reading order which I thought was allowed. I was under this impression and frankly still and because; before I posted and since it was closed I have read the help and the tour pages and saw this the below image (in the Tour). 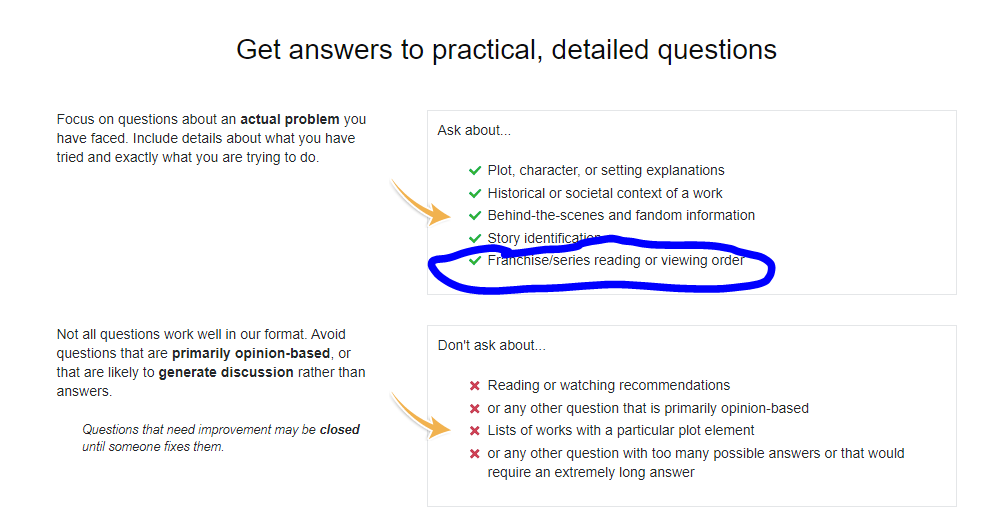 I am confused by this situation and trying to improve. Even in this question here on Meta, shows that there was a discussion on this but not decisive and furthers my confusion, as I was directed to start a chat --- but currently do not have the reputation to do so.

So my question is this - how can I ask better questions that aren't put on hold for not following the rules, when it appears that I did?

Your question is not off topic per "lists of works or recommendations" and those who voted to close it as such did in error. The post was also unilaterally left open in review (myself being one of the reviewers) as you can see here and was closed outside of review.

That said at the time I was considering voting to close the question as Too Broad as there are way too many books in Star Wars canon than can be reasonably answered in a single answer on SE. However, I erred on the side of caution as I'm not too familiar with Star Wars book canon so it might have been able to have been condensed some.

A quick note: it's also worth mentioning that there's potential that not all of the close voters chose that close reason. In a case where multiple close reasons are chosen the system picks the one with the most votes i.e. at least 3. So some of the voters might have chosen a different reason.

How to improve your question?

Personally if I was you at this point I would try and work out what areas of Star Wars literature you are interested in. What's the time period you want to read about? Are you only interested in a few specific events?

From there I would edit my question to ask about the reading/chronological order of the books from that time period or event. Not only would that make the question narrow enough to not be too broad it would also remove the potential duplicate status.

This question is a nice example of this. Focused to a handful of books (4) that are in a "series" and asks for the suggested order of them.

Not the answer you're looking for? Browse other questions tagged discussion specific-question closed-questions .

17
Should the "lists of works" close reason be updated?

3
Why is this question closed?
2
Why was this 'how to sell my Analog magazines' question closed?
15
Closed as asking for a list when I said I don't want a list
17
Should the "lists of works" close reason be updated?
10
Audience-specific texts for custom close reasons: Lists of Works or Recommendations
10
Looking for feedback on a Looney Tunes episode identification question closed as off-topic