Why was this “future works policy” close flag declined as an improper use for flagging?

Note, I do not have close-vote privileges, so instead I have to use flags. The flag menu has an explicit "this question should be closed" submenu.

I flagged this question for closure with the custom reason:

Close for future works? The answer is "no" right now, could be completely different (and obvious) next week.

This was declined with the message

Surely that's wrong? If flags are not supposed to be used for closure, why is there a whole UI supporting it?

Why was this flag declined?

I'm reasonably sure one cannot write an actual custom close reason before having close privileges.

When you get to 3k the dialog shows a new option in the "close as off-topic" submenu, saying "I'm voting to close this as off-topic because... (Enter text)". This leaves a comment with the text you wrote.

As shown in this screenshot (thanks Mith!), such an option is missing for <3kers: 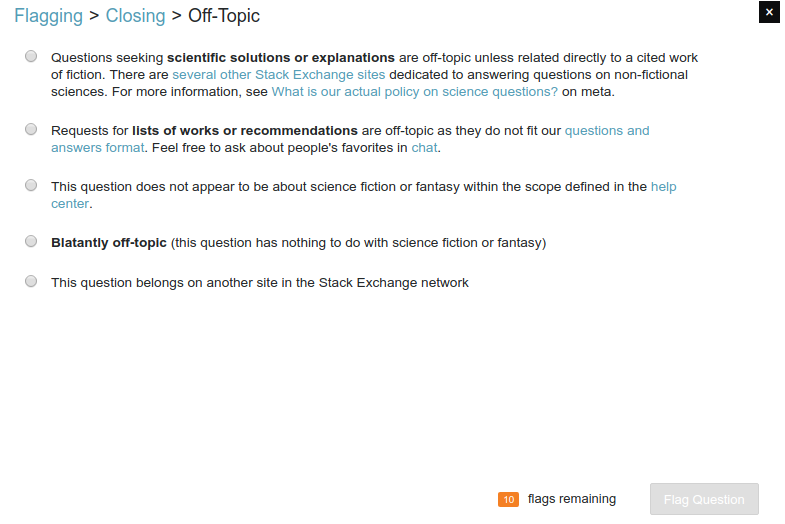 What I think happened is that you used a custom mod flag, which is technically not a close flag. Thus, the mod handling it may have rejected it as the valid flag would have been a close one, sending it to close queue, leaving it to be handled by the community - something that does not, especially, requires mod-only intervention.

But I'm not the mod who handled it, so that's just my best guess...

Note: this answer was written to respond to the first version of this meta question. As it was edited to tackle a specific main question, see TLC's answer for the future works thing.

The flag was declined correctly because the post itself does not fall foul of the Future Works Policy as it is clearly asking about events that have already happened. It is not asking what will happen or the like.

Has the connection between these characters and this event been confirmed in Agents of SHIELD (so far)?

Not that I'm doubting it - it's just enough of a plot convenience to be true - but has any of the exposition we've seen so far explicitly confirmed this?

In this case it looks like the moderator chose the best canned decline reason to explain why they were declining the flag. Though I suppose "found no evidence to support this" or "please use standard flags" may have been better.

However, on reflection and looking at Jenayah's answer it looks like you accidentally used a custom mod flag as custom close reasons aren't supported for <3k users. Therefore, it was declined with the correct reason as it didn't require mod intervention and should have been flagged for closure through the normal process.

FWIW in this case you should have really flagged for closure with "Primarily opinion based" as that is the close reason that is used for the Future Works Policy.

Not the answer you're looking for? Browse other questions tagged support specific-question flagging .