What's up with prominent users editing blatantly off topic posts?

This is in reference to the two posts made by an user yesterday which were heavily downvoted for being blatantly off topic. However, I noticed some users editing those topics when they ought to be deleted. 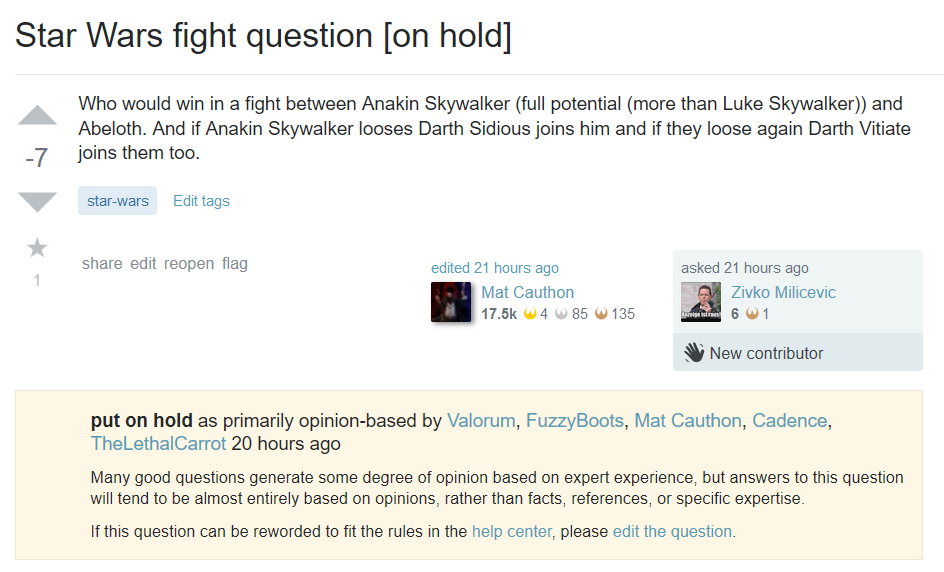 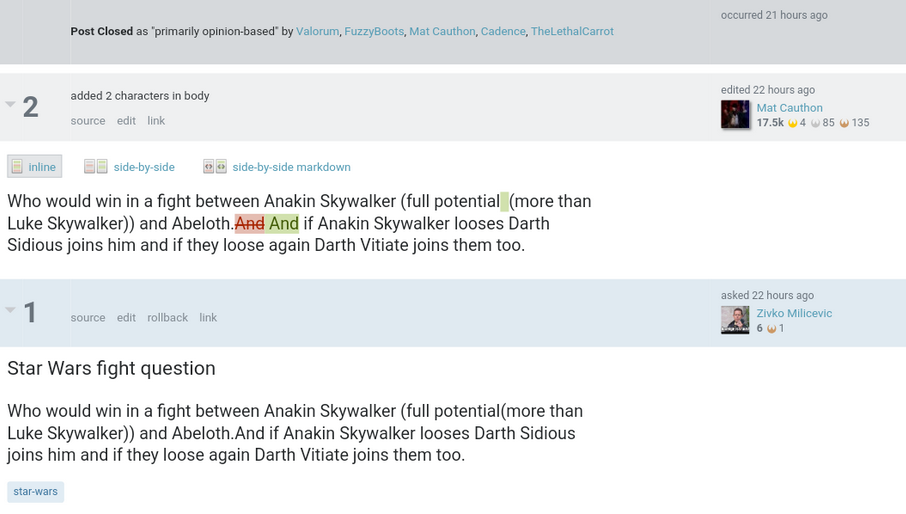 In the "Star Wars fight question", why was that edit on And even needed? Just adding space after full stop for what reason? So it looks better before it's deleted? It's beyond me that someone would edit an obviously POB question

The other questions were asking opinions on an obviously fake list (someone edited it to make it appear more like a list, which is still fake but looked better now); Star Wars Midichlorian counts 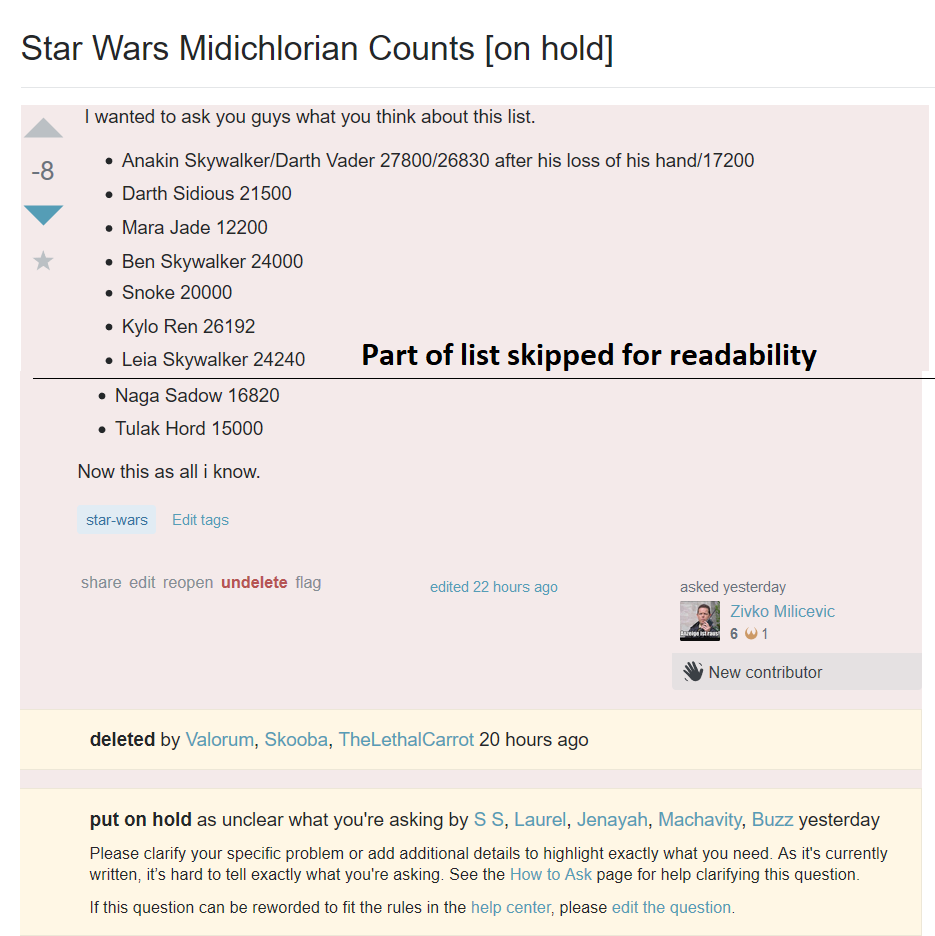 And the last one was just a picture with the bold claim of having found middle Earth and nothing else and someone still decided to the do the same adding a few spaces to random words; Did I find Middle Earth? 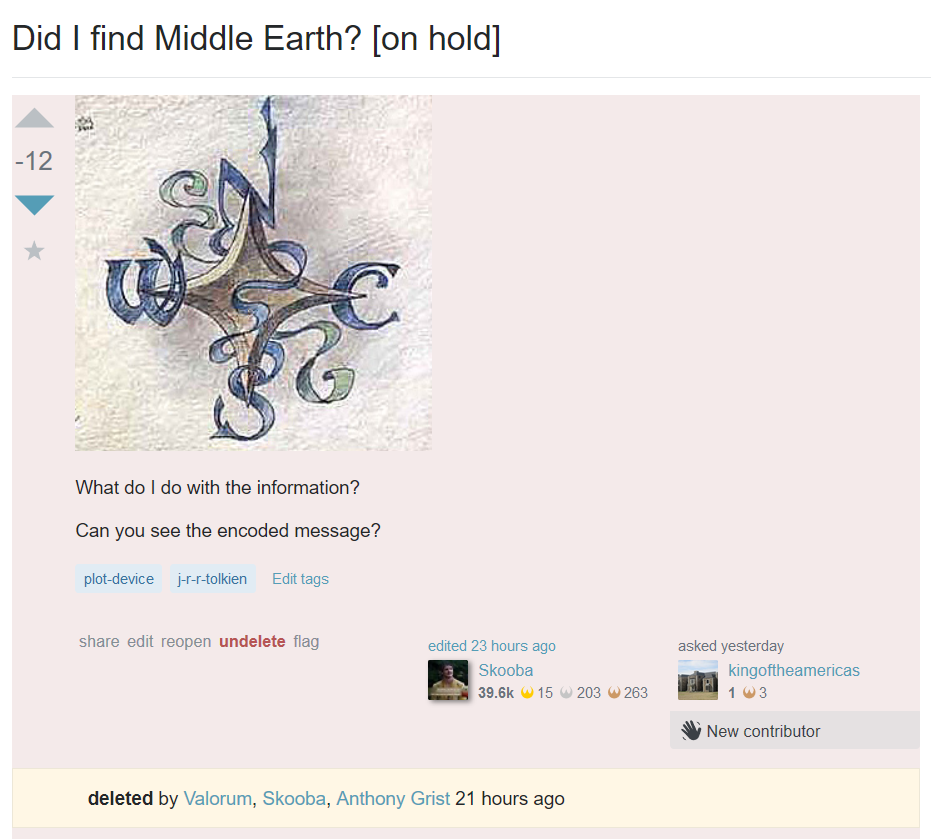 Curious to know why?

Since your question is specifically about "blatantly off-topic posts", I'll restrict this answer to the context where the questions are clearly off-topic and none of the users involved want to reopen them.

There's usually no point in editing such posts ...

Questions which are off-topic should usually end up deleted, and in many cases will be automatically deleted by the system after some time without need for user intervention. So there's no point in prettifying or improving something that's going to disappear off the site anyway. Especially minor edits like adding spaces, which one would usually expect as a touch to add perfection to an already good post - but even tag edits don't matter for posts that will end up deleted, as they won't appear in the tag lists.

I guess people are doing this as a knee-jerk reaction - when they see a post with poor formatting or tagging, they want to improve it, without stopping to think that they might just be polishing a turd. We might also speculate that one motivation for such edits is badge chasing - either to get more edits under their belt, or to get extra reviews (more on this below). But there are much more harmful things people could be doing in the cause of badge chasing; polishing turds is at worst pointless, not actively harmful. Which brings me to ...

... but there's usually no harm in it either.

I'm not sure why you seem so indignant about this. It is strange behaviour, true, but it doesn't really harm you or anyone else. As mentioned above, it could be badge chasing - and this site does have a (minor) broader problem with people making pointless edits - but less harmful to the site than other forms of badge chasing I've seen.

The main harm I can think of in editing blatantly off-topic questions is that it might kick them into the Reopen Votes review queue, thus wasting reviewers' time on a review that should never have existed. This would only happen if the question is edited after being closed. So if we want a general guideline out of this, I'd say don't bother editing questions which are (a) closed and will clearly never be reopened or recovered, and (b) on their way to deletion, either by user votes or roomba. If the question is arguably on-topic and might be reopened, or if it has answers and therefore might stay on the site, then feel free to go ahead and edit it just like any other question.

First, as Kevin pointed out in a comment, there are a couple of reasons to edit off-topic questions.

Now about the three specific ones from yesterday.

The timeline of "Star Wars fight question" shows that the edit was made through LQP review queue. It's not obvious, but editing through the review queues kicks the post off said queue (per main Meta). It's not obvious, because in Low Quality Review, you're faced with 4 buttons: Looks Ok, Edit, Close (on questions)/Delete (on answers), Skip.

The screenshot below is a bit outdated but it shows the gist of it:

Nowhere does it explicitly say your edit will remove it from queue. It looks like the ordinary Edit button. So if you're not sure it should be closed, but still think it's worth an edit, there's an Edit button right here rather than the skip/close ones. Flaw in the system if you ask me, that should read "Edit - warning, it's a binding out-of-review edit". But I digress...

The edit made the question go from "unreadable block of text" to "readable off-topic list" (compare). Is the question still off-topic? Very definitely so. Is it clearer why? Kinda. The block of text screams "unclear" before it screams "off-topic", but a post that opens with "What do you guys think of my list" is explictly a no-no per the Help Center's "Don't Ask" ("there is no actual problem to be solved: “I’m curious if other people feel like I do.”").

It's not the greatest edit you'll find in this site, but at least it doesn't disturb the homepage as the question scored below -4 (and thus is only bumped in the "active" tab, not on the homepage).

Did I find Middle Earth?

The edit (screenshot) fixed a bit of formatting and added the j-r-r-tolkien tag. Once again, it's not the most useful edit in the history of SFF, but a j-r-r-tolkien watcher might be able to provide more guidance (see point 4. above) or actually understand what is going on here. The question was deleted shortly afterwards, though.

About editing "on hold"/dupe questions...

Of course, it can happen that one has just woken up/is on their phone/just isn't giving it much attention, so they go for an edit instead of VTCing/VTDing first. Happens, fortunately we have a good base of other users who moderate the site and take care of the matter. Sometimes people can also think twice and VTC/VTD something they didn't deem worthy of before.

Coincidentally, it happens that when an "on hold"/freshly dupe-closed question is edited, it automatically gets sent to the Reopen review queue, where anyone over 3k rep can vote to Reopen or Leave Closed. That includes the one who edited, unlike, for instance, VLQ posts that you can't review if you previously cast a VLQ flag on them.

As long as the edit somehow helps the post with regards to 1+ of the 4 points above... It kind of helps, even if by a long stretch, so, alright, I guess.

However, in my only-commits-me opinion, when you're going to edit off-topic questions with a very minor edit, and then cash in a Leave Closed vote (progress towards Reviewer/Steward badges...), and then vote to delete it right after that, repeatedly, perhaps the "Delete" button is the first one you should have pressed. Just saying.

In short, there's usually no downside to such edits. Most of these types of edits come shortly after the question has been posted. The edits are not bumping bad posts to the top of the homepage, because the posts are already at the top of the page. Such edits would only have a downside if they were done in a way which sent the post out of the Close Queue or into the Reopen Queue. The latter is less likely to happen because that means the question has already been closed. The former would only happen, as Jenayah explained, if someone edited the question from the queue without realizing that that is the equivalent of a Leave Open vote. Additionally, even if it does happen it is not much effort for people to quickly review a question again and vote to Leave Closed, and if it was kicked out of the Close Queue it will probably still be seen by enough users to close/delete it.

The upside of such edits, however, is fairly reasonable. It is always better for a post to be better written and formatted. Even if a question is on its way to being closed/deleted it can still benefit from editorial improvements. We don't want poorly written posts sitting around until they get deleted. A well-written but off-topic question looks much better than a poorly written off-topic question.

In short, I would assume that some people make these kinds of edits because they feel that the benefits outweigh the risks.

Another important point is that one person's "obviously off-topic" is another person's "perfectly fine question". And the same for other close reasons. There is often quite a bit of dispute about question closures. So even if you think that a question should clearly be closed and deleted, it is quite possible that other users disagree. From their perspective they are simply editing legitimate questions.

8
Is a promotional grant for Star Wars: The Complete Saga on Blu-Ray wanted?
2
Are references to other questions in question introductions ok?
4
What type of questions bring in the most viewers?
8
Editing Posts and Rollbacks
13
Movie Events and Ratings
22
Was I "not very nice"?
7
Why was my flag on an obsolete "add this tag" comment declined?
5
How to handle answers edited to add something that appears to infringe copyright