Why was my flag declined because the mods were "already aware of this user's struggle"?

Note: This question is asking the moderators to explain why my flag was declined. I don't want people answering to guess why it may have been declined but the actual reason.

Recently a user had some struggles coming to terms with how the site works, after multiple attempts at trying to reach them by me and other users they still seemed to struggle. To cut a long story short I eventually flagged for a moderator to have a word with the user to help them out. I did this because:

To give some context my flag was:

Might be worth a mod messaging the OP here as they appear to have a fundamental misunderstanding of the site and are close, if not already hit, the answer ban.

However, this flag was declined. The reason states:

Eh? So, my flag was declined because the mods were already aware of the problem? How was I supposed to know that? You may look at the reason and see I flagged multiple times, this is true. However, looking at what those flags are the decline still doesn't make much sense. 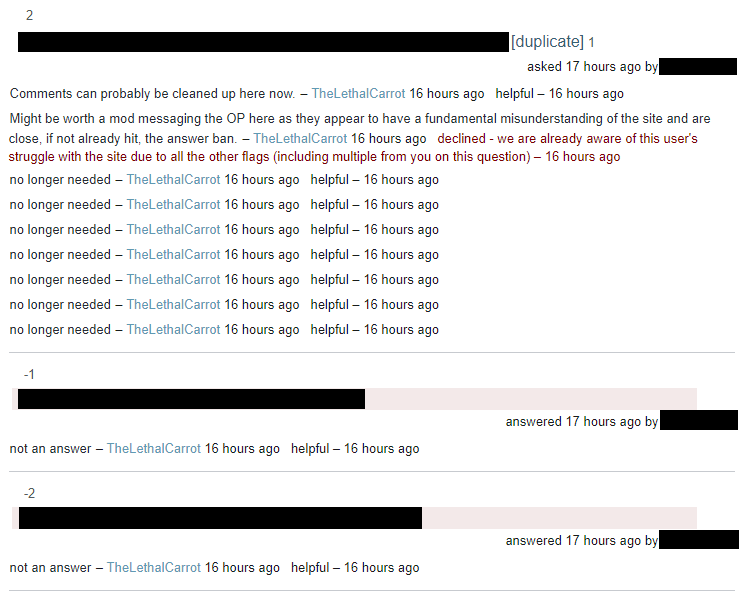 There were also other flags from me on their posts that you can see but of course these were Not An Answer flags on separate posts that weren't answers.

For full context a while back they also had another post that was Not An Answer and had some obsolete comments on it that I deleted.

Nowhere have I previously flagged asking the mods to potentially have a word with the user here. Therefore, I'm not sure why my flag was declined because I would have no idea that the mods were already aware of the problem or that other users had already flagged.

Why was my flag here declined?

Let's start with a summary of the events, with everything listed in order:

I declined the second moderator flag because the two moderator flags were for essentially the same issue: a lot of comments had been generated between a struggling new user and more experienced users who were trying to help. Any moderator handling your first mod flag (or even simply your first batch of comment flags) would inevitably see this new user's struggle in the course of deleting the comments on the question and could decide what (if anything) to do to help the new user. The second moderator flag simply recommended a particular course of action but provided no new information. If you wanted to suggest that we send a mod message you could have just as easily (and should have) made that suggestion as part of the first mod flag. Hence the second mod flag was unnecessary.

The new user did make one new post after your first mod flag (and which ended up being deleted). I don't know if that's why you raised a second mod flag but if so you should have linked to it or at least mentioned it in the flag text -- especially since you flagged the same post twice rather than flagging that newest post which caused you to raise a new flag.

In general I mark flags like your mod message suggestion as helpful even if I don't end up taking any action on them (I cannot reveal whether or not a mod message was sent in this case since mod messages are private). I encourage all users to raise a mod flag if you are concerned that the moderators need to be made aware about something that a moderator can handle. The issue with this specific declined flag is that you had already made the mods aware of the new user's struggle with your first mod flag. Mod flags never go away until a moderator marks them as helpful or declined so you knew the moment that you raised the first one (to clean up the comments) that you'd made us aware of the situation. Moreover, in this case it should have been apparent to you that a moderator had seen all the comments you'd flagged since you could see at the time you raised your second mod flag that those comments had already been deleted. If any other user had raised your second mod flag I would have marked it helpful since another user would not be aware that you'd already raised a mod flag.

Duplicate mod flags are at best a nuisance if a single moderator handles both of them and at worst cause duplicate work if two different moderators see them. If I had gone offline after handling your first mod flag (and deciding what to do about the struggling new user) then a second moderator would end up duplicating my work when he saw your second mod flag. Such a duplicate mod flag is, in the words of the flag handling dialog box, "unhelpful" and "noise": 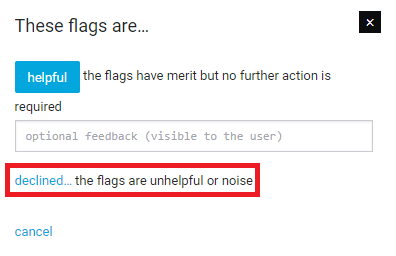