The Warriors is a 1979 film (with a 2005 home re-release that adds comic book transitions between scenes) that takes place in New York City that is full of peculiar gangs. The setting was, as of the time it was made, clearly intended to be in the near future, with the city having become practically a hellscape of gang violence. The city is more defaced by graffiti than NYC ever really was, and the street gangs are identifiable by their bizarre forms of dress—like pimps, or mimes, or baseball players, or what have you.

And yet, however unrealistically violent and run down the city has become, the setting is not post-apocalyptic. For many people, life goes on seemingly unaffected. There is still a police force; high school students still go to prom. There are no overtly fantastical elements, but the depiction of New York is clearly not realistic either.

Since a question about The Warriors occurred to me today, I wanted to ask here on Meta to see if there was a consensus about whether it was on topic for Science Fiction & Fantasy. It seems to me to be an edge case, and I would like to get others' thoughts.

The simplest way to determine if something's on-topic is to look at the conceit, the goal of the director and the marketing. It's pretty straightforward to see that this film is firmly on topic, although questions about the minutiae of the non-fantasy elements is probably stretching things a bit too far.

The film is set 'one-minute-into-the-future' and certainly has dystopic elements to it. The size and scope of the gangs, their garb, their relationship with the city and the police are all clearly not intended to be a literal interpretation of the City of New York. Additionally, the director is very clear that the film was intended as a dystopia, although the studio largely marketed it as an action film.

WH: That's right. [Laughs] It was meant to be a dystopian tale about the near future, but at the same time it was meant to be a lot of fun and have humor in it. The humor has always played, which I was happy to note every time I saw it with an audience.

This one's trickier. The original marketing mentions that the film is a "contemporary action-adventure" story but in light of what Hill said about the studio's confusion, this would explain why the blurb doesn't really match the film.

WH: I felt very strongly that it certainly was not a very realistic book, and I wanted to make it even less so. I wanted to take it into a fantasy element, but at the same time add some contemporary flash. Those were some of the hard ideas we had to get the studio to understand. But we did not get along very well with our parent company. After the movie came out and it did well, everybody was sort of friends. But up until then there was a lot of misunderstanding. They thought it was going to be Saturday Night Fever or something. 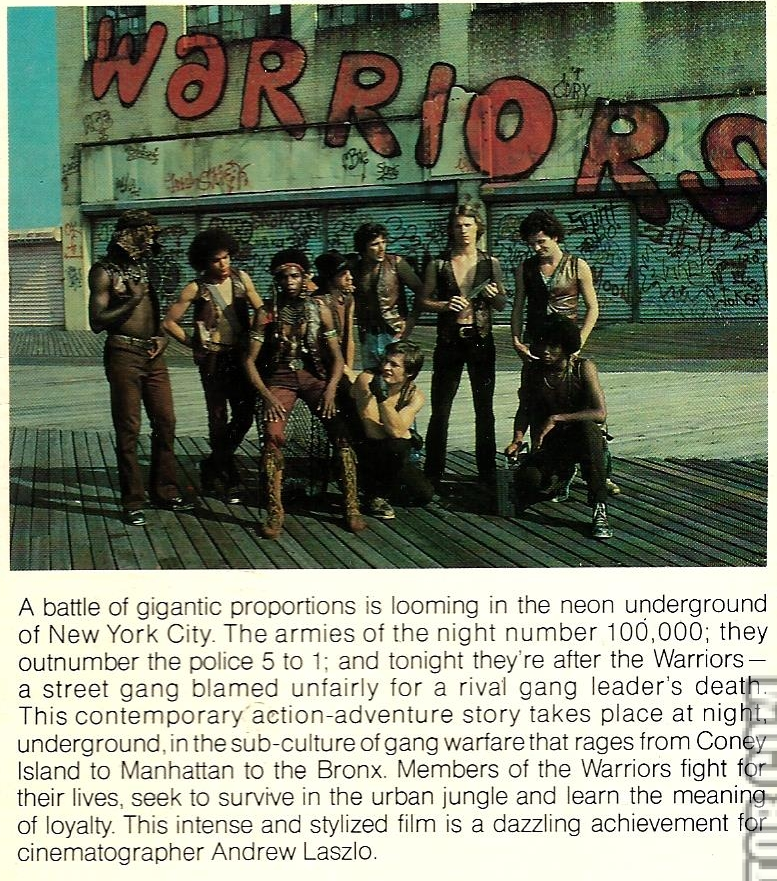 2
Are all utopias and dystopias on-topic?