Is Rosencrantz and Guildenstern Are Dead on topic?

Tom Stoppard's play Rosencrantz and Guildenstern Are Dead is a perspective flip of Hamlet, written from the viewpoint of the two least important characters who die in the course of Shakespeare's original. Hamlet itself contains a minor but significant fantastical element, the ghost of the dead king.

The ghost does not appear in Stoppard's play, but there is another arguably fantastical element that is crucial to understanding what is happening in Rosencrantz and Guildenstern Are Dead. Although the two protagonists do not realize it (and are indeed extremely confused as a result), they only exist because they are characters in a play. They wake up on morning, summoned to Castle Elsinore, with no clear memory of their lives before that. They travel to the castle, appear for their scenes in Hamlet, and die for no readily comprehensible reason. And yet, even though they have trouble remembering which of them is Rosencrantz and which Guildenstern, they have a sense that, even after they die, they will be back to go through the whole thing again (the next time the play is staged).

That is hardly the way reality works, but it's not really typical of fantasy either. So I am wondering whether it qualifies as on topic here.

Yes, this play is most certainly on-topic, featuring many elements that would make it a suitable match to SFF:SE.

1) The characters themselves exist in a sort of other-worldy eigenstate while they wait for the events of the Hamlet play to catch up with them and propel them into their next scene. During these interludes they experience time-stoppage and repetitive events such as the famous coin-tossing scene.

2) Both characters repeatedly experience time-skips and amnesia brought on by their lack of characterisation in Hamlet.

3) Both characters repeatedly experience premonitions of future events including their own deaths.

4) The entire third act of the play takes place after the characters have died, during which time they discuss the nature of their reality.

Assuming we take the film into consideration (which I feel we should, given that it was directed by Stoppard himself), it was promoted as a

"dazzling setting in which illusion and reality overlap" 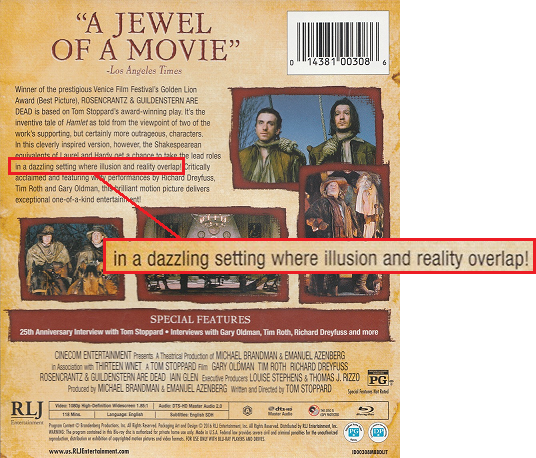