Is "The Rats of NIMH" series on topic?

I'm aware anthromorphic animals are rarely on topic. But what about the rats of NIMH series? Over here Kevin answers

Our final criterion, then, is this:

If the animal's non-human nature has substantial narrative focus, then the story is probably on-topic. Stories that pass this criterion tend to ask and answer questions such as the following (not an exhaustive list):

According to this the NIMH series is most certainly on topic, though displaying no other fantastical elements.

Is this universally agreed?

The usual test is to look at conceit and marketing. Both of those heavily indicate that this book series is (science) fantasy, and hence on-topic

A group of rats has been subjected to bio-medical experimentation and has become intellectually "uplifted" to human levels of intelligence. They then develop a civilisation. Humans interacting with these rats are the central plot of the book.

Mrs. Frisby discovers the rats have a literate and mechanized society. They have technology such as elevators, have tapped the electricity grid to provide lighting and heating, and have acquired other human skills, such as storing food for the winter. Their leader, Nicodemus, tells Mrs. Frisby of the rats' capture by scientists working for a laboratory located at the National Institute of Mental Health (NIMH) and the subsequent experiments that the humans performed on the rats, which increased the rats' intelligence to the point of being able to read, write, and operate complicated machines, as well as enhancing their longevity and strength.

Our existing policy on talking animals is that they don't count unless...

Both the book series and the subsequent film were heavily marketed as children's fantasy. 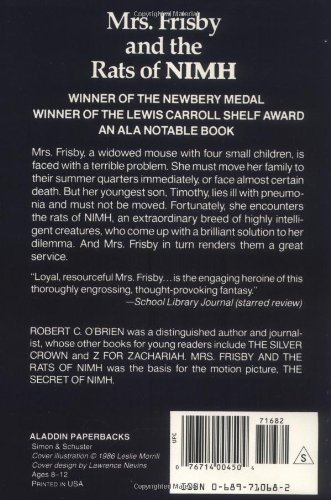 "Right before your eyes and beyond your wildest dream" 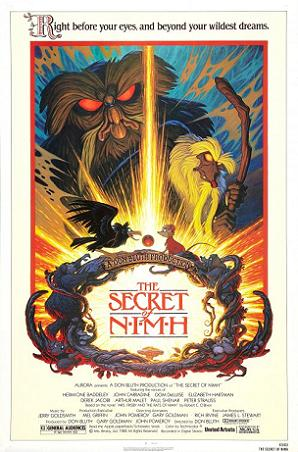 Some of the major things in these stories is that the rats became intelligent through a laboratory experiment, became intelligent enough to escape, escaped, created their own society... And don't forget that they can communicate with humans, and do things like farm carrots.

It's definitely SFF. I'd say it's unquestionably on topic.

28
Are anthropomorphic animals by themselves enough to deem a work fantasy?
15
Are the Peanuts comics on-topic?

7
What is the limit for questions about ongoing series?
13
Should questions about where to start with a series be on-topic?
19
Are questions about Lemony Snicket's "A Series of Unfortunate Events" considered on-topic?
9
Is "Penguins of Madagascar" on-topic?
4
Would The Jungle Book be on-topic?
8
Tags for The Expanse book series and TV series
15
Are the Peanuts comics on-topic?
10
How/where to ask question that the FAQ says is off-topic?
2
Are the Choose Your Own Adventure, as a series, sufficiently on topic?
4
September 2022 topic challenge: the Deryni series