Why were the "Not an Answer" flags on this post about wandless magic in Harry Potter declined? 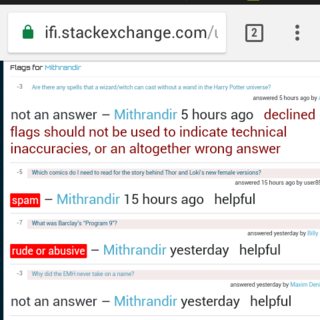 In any case, thanks to the meta effect, the answer has since been deleted by three high-rep users.
Share
answered Aug 6, 2017 at 22:19

10
How do we handle answers that don't answer the question?
10
Let's get aligned on our site specific usage of the Not an Answer flag

10
How do we handle answers that don't answer the question?
5
How is this an answer?
8
Confusion about declined flags
5
Why were these comment flags declined, while the comments were deleted?
1
Why was my flag "not an answer" declined?
21
Why was this 'not an answer' flag on a rant about US declined?
2
Why were these flags on an answer that gave the original source (non-comic) of a quote on a question that wanted the comic source declined?
3
Why was this VLQ flag declined despite the post being deleted?
13
Am I misusing the "Not An Answer" flag?