Why can't you change your reason to close after making a close vote?

I voted to close on this question, Back to the future, A couple of things im confued about. I made a mistake and voted as Not Clear What you are asking, when I wanted to vote as Too Broad, so I retracted my vote, but then I was not allowed to place a vote.

In regards to other questions and comments. I want to vote to close, I make the vote, upon further thinking, my reason was not the best one so I want to change the reason. Why can't I change the reason, I am committed to closing , that is clear, so what is the issue with changing the reason?

Why can't you change the reason to close?

This answer on main meta explains the motivation behind not being able to re-cast a vote to close after retracting it:

One important thing to note with this way is that retracting a vote does not allow you to vote to close again (until the retraction ages away). You've already cast your vote to close on the question, and just because you retract it doesn't mean you should be able to override the normal rules of close votes (you can only ever cast one close vote and one reopen vote on a single question) and vote again. You also don't "get a vote back" for the day to re-cast on another question.

Also, you were told before retracting that you wouldn't be able to re-VTC afterwards. Whenever you retract a close vote, the system warns you that you won't be able to re-cast it. I can't test this myself on SFF, since I have binding close votes here, but here's a screenshot I just took on another site to show you what it looks like: 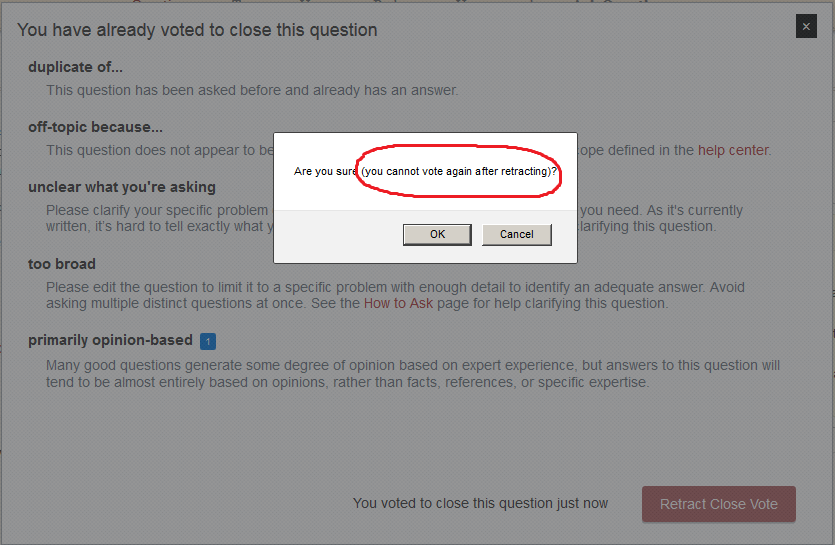 Edit: you've now changed your question to ask why one can't change the reason for VTCing after casting one's vote. I imagine the answer to this is simply because SE have never bothered to implement that particular feature. I'm not sure how much it would be used, since responsible VTCers should make sure they get the reason right before casting their votes in the first place. Perhaps the time and effort required to implement it would be disproportionate to its actual use value in practice?

In any case, there's an 8-year-old main meta feature-request for it here: Ability to change close reason before it gets closed with several positive answers. Drawing attention to that post might be the best way to try to get this feature implemented.

Shrug I am a user of the site.

I think VtC is a serious decision/action. It should not be taken lightly.

What follows is my opinion, it may be in line with guidelines for SE or it may not.

It is my opinion, there should be levels of escalation.

2) You think the question is ok, just not workable as in needing the questioner to redo it. You can flag the Question.

3) You are convinced the question is not correct for this Q/A and can not be salvaged. You can VtC.

At level 3 there should not be a take back. You had your reasons, they were carefully thought out and objectively executed. Others may agree with you, they may not agree with you.

You seem to want to change the "reason" you VtC'd from A to B. I make mistakes, I am human, this action is an action that should be taken seriously and that means you should be careful/deliberate,sure of the choices your making.

Edit Rand al'Thor "Also, re point 2: flag it as what?" - Flag it using the flag that most characterizes your reasons. While I do not have access to the VtC process/reasons, one might ask why the VtC reasons do not show up for those that are able to VtC. For clarity, Leaving the Post in Hold but indicating the reason to close.

Edit Rand al'Thor "So I can't see any difference between your options 2 and 3; the only difference between flagging for closure and voting to close is in the reputation of the user doing it, not in the nature of the question" - Then perhaps the fact that Reputation is able to close based on a Flag is more of a hindrance than a feature. IF the flag does not close the question, then the OP could in fact execute the 2nd level before escalating to the 3rd level. Regardless there are other Flags that can be used that puts the post on Hold. OR i am simply not understanding what your point is.

Not the answer you're looking for? Browse other questions tagged discussion closing-questions .