After an extensive search for the site's favourite TNG episode, the single highest voted episode was ThunderForge's suggestion, "The Inner Light".

We'll watch together in the Mos Eisley chatroom on 29th April @ 10pm UTC (11pm BST/ 6pm EDT) and a copy of the show will be hosted on our shared video room for those who don't have access to the episode. 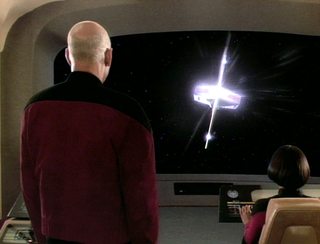 Q. How do I nominate an episode?
A. By posting an answer below.

Q. What if I don't have access to a copy of the winning episode?
A. We'll (try to) host a copy in our shared watch2gether video room. All you need to do is click the link.

Q. What if I hate Star Trek and want to watch Futurama instead?
A. Then start your own TV club. With hookers and blackjack.

I nominate The Inner Light

And really, can you in good conscience not vote for his favorite episode?

My favorite episode is "Inner Light." It was a beautiful script, which for me was almost entirely located away from the Enterprise—and it's crew! And because I was given the chance to perform what Picard would have been like if his life experience had been different. But another important reason is that I had a son in that episode who was played by my son, Daniel Stewart.

It won the Hugo Award for Best Dramatic Presentation

And was the first TV episode to do so in 25 years, since The Original Series episode "The City on the Edge of Forever", widely considered the best episode of that series.

Thus it should be accessible to new viewers who have never watched the show.

It had that awesome flute song

(Someone is always cutting onions in the next room when I listen to it!) 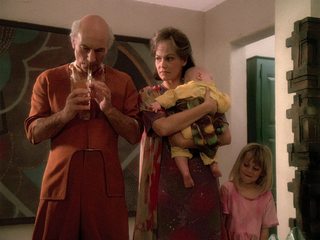 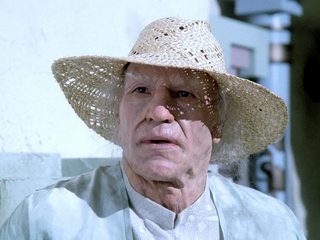 This episode was also nominated for an Emmy Award for Outstanding Individual Achievement in Makeup for a Series. 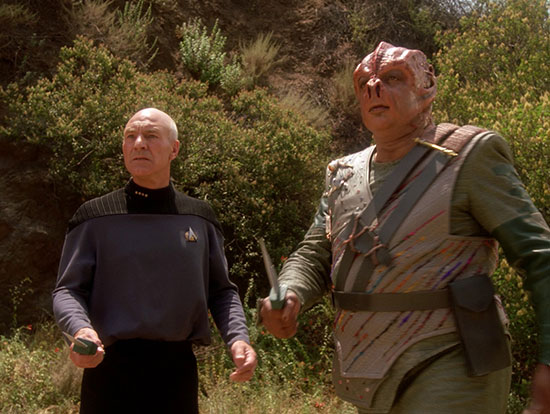 It has suspense. It has intrigue. It has Data's new quarters after they destroyed his old quarters filming the Star Trek VI special edition commentary. It has an unnecessarily nerdy premise, and it shows Picard's strength as a captain who is different from Kirk. At a time when the Kirk vs Picard war was raging, this episode showed disparate races working together for a common good, rather than self-righteously telling others to do so while kicking faces in, and stressed the pacifistic ideals of the next generation. 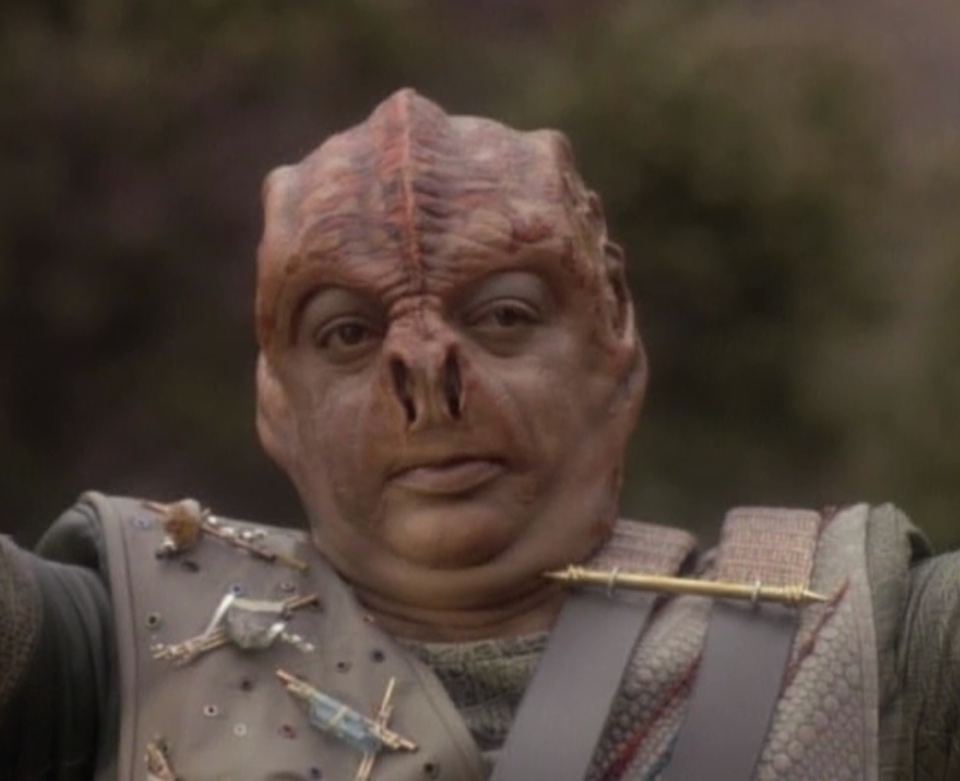 A great episode where a rip in spacetime causes the crew of the Enterprise to encounter Enterprise-C.

It tells the story of what would happen had a key historical event not kept the peace between Federation and the Klingon Empire.

Well, Picard would be in charge of a militarised version of the Enterprise. 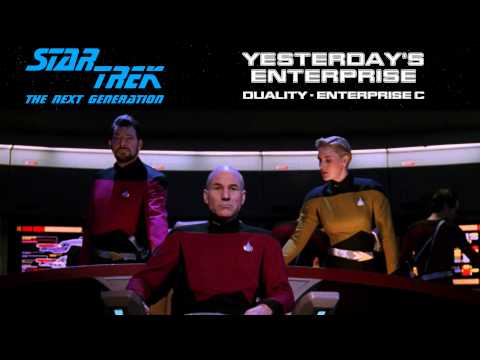 Another vessel, the Enterprise-D, teams up with the Enterprise-C, whose crew decides to return to their own time to sacrifice their lives to defend a Klingon outpost. In this alternative timeline, Tasha Yar is alive and goes with them ... and later we learn a great plot point concerning her.... 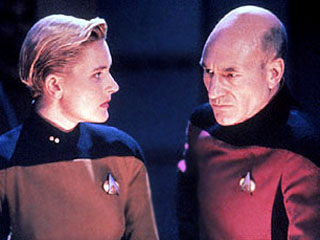 I nominate The Best of Both Worlds. Is there a more obvious pick?

Hailed as perhaps the greatest Star Trek episode of all time, this two-parter (consisting of the last episode of Season 3 and the first of Season 4) contains a jaw-dropping cliffhanger in the middle that left fans gasping for months. It features one of the best Star Trek villains, the Borg, and subjects the crew of the Enterprise and Starfleet at large to one of the greatest threats they've ever faced.

In 2008, Empire magazine rated Star Trek: The Next Generation 37th on their list of "The 50 Greatest TV Shows of All Time" and cited "The Best of Both Worlds, Part II" as the show's best episode. The episode was ranked #36 on TV Guide's list of "TV's Top 100 Episodes of All Time".

Plus, for goodness's sake, you've even included a gif from it in your question! Clearly, you've been subconsciously influencing people towards this choice from the beginning. 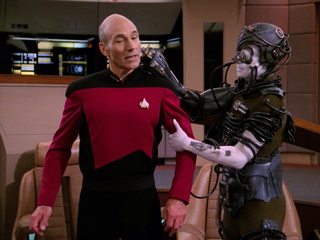 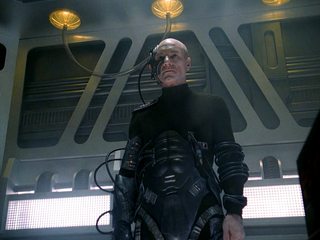 I nominate TNG: Starship Mine from season 6.

Not perhaps the most obvious choice (not as flashy as Q Who or as "acting" as Chain of Command, Pt II) but a really fun episode that everyone can enjoy. Picard gets to play the action hero for a change and there's an amusing B-plot with Data learning how to be even more insufferable than normal. 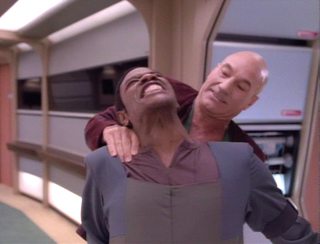 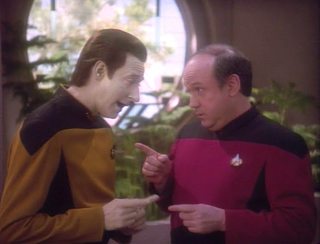 I vote for "Phantasms". It's always been one of my favorites.

Mostly because it centers around Data, who is exploring a dream program... and Deanna Troi spends a chunk of the episode as a cake:

Now, while this one doesn't necessarily have the social message of many episodes, it's funny to see the random odd situations Patrick Stewart (who directed the episode) had to direct his crew in.

I nominate the thrilling season two climax, Shades of Gray. 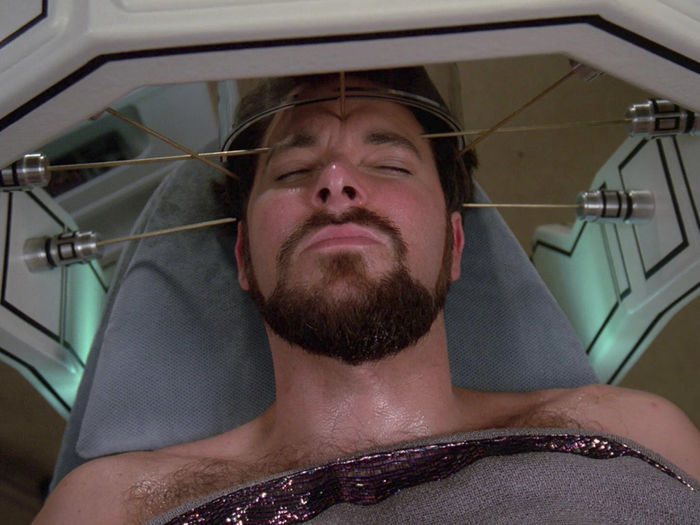 Nowadays, heartless profit-driven media empires leave the unwashed peasant audience (us) to toil away in the YouTube mines putting together quality video mashup content like this. Let’s remind ourselves of those golden years when television production companies would, on one very special budget-conscious night every couple of years, do it for us.

The episode’s director, Rob Bowman, thought the episode could be shot in five days, but it actually only took three. This is a Scotty-level feat of technical efficiency worthy of celebration, and absolutely not the result of phoning it in to kick off the summer break nice and early.

9.8 million people watched this episode when it first aired. Just imagine if it wasn’t actually any good? I don’t want to live in a world where that’s true. I don’t think Riker does either, but apparently no-one in Starfleet has the good grace to turn off his life-support.

Anyway. Shades of Gray. You know you want it. 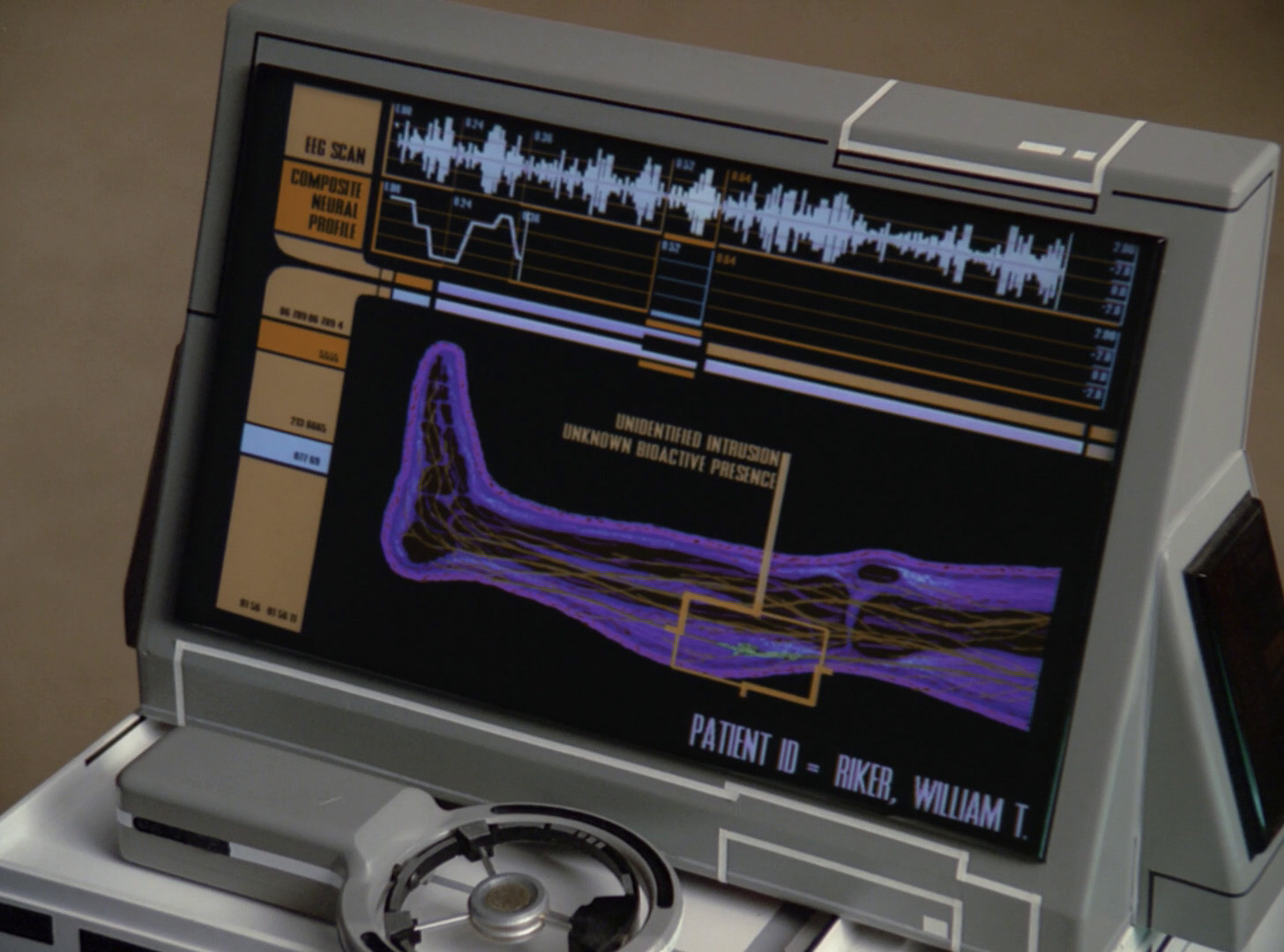 Late to the party, but I nominate Season 4's Half a Life.

While traveling on board the Enterprise, Lwaxana Troi encounters a soft-spoken alien scientist named Timicin (the always excellent David Ogden Stiers), who is working with the crew to save his planet's sun. Despite their differences, love blossoms between them. All is imperiled, however, when Troi learns that Timicin has reached the age of "The Resolution" among his people, and is expected to commit suicide in order to not burden society in his old age.

Why I Nominated This Episode

Half... is, IMHO, one of the most thought provoking and thoughtfully done episodes of the series. It addresses a topic of a serious moral and ethical nature and does so with aplomb. That alone sets it apart from most of TNG's "message" episodes.

As much as I loved TNG, it often handled such matters awkwardly. The results ranged from merely hamfisted, to insufferably annoying in its smugness. (Riker smugly virtue signalling to the Antican ambassador about replicated meat, Counselor Troi smugly poo-poohing "outdated morals" in the "Outrageous Okona" episode, and so on. And then there's Tasha Yar's fetal-position inducing Level 5 Smug Alert anti-drug speech to Wesley Crusher...)

Half...commits none of these sins. It takes the subjects of aging and the value we place on our elders, and embraces them without resorting to cliche or partisanship. The resulting storyline is nuanced, with both societies' views well-represented without the show taking sides. It makes for first-rate, and rather profound story-telling.

Equally worth mention is the superb acting in the episode. In particular, Majel Roddenberry's standout performance. 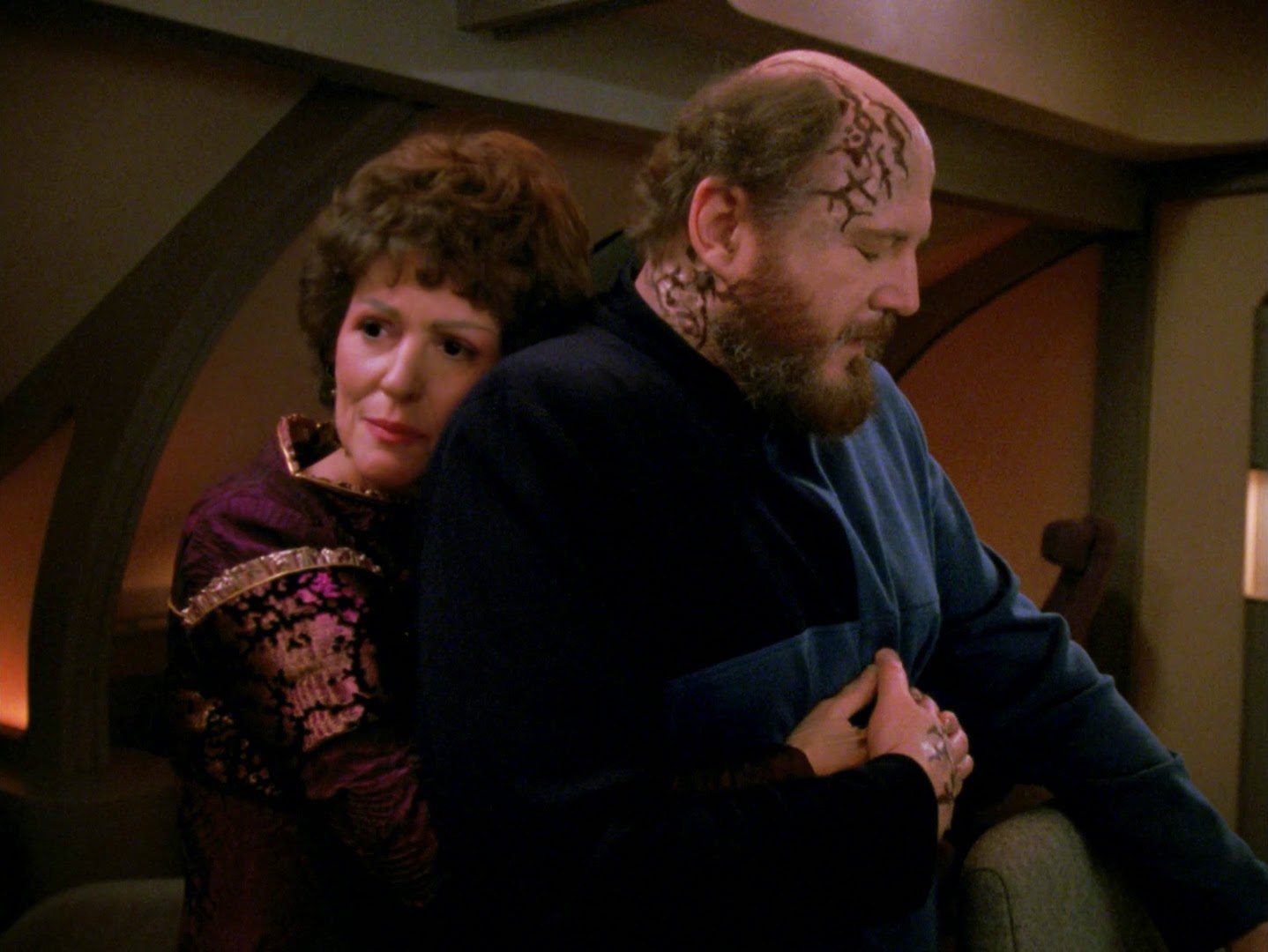 I'd never liked the character of Lwaxana Troi in any of her previous outings. In fact, I loathed her appearances. I never found her amusing or even so-bad-its-good amusing. Just incredibly irritating and a waste of screen time. Half a Life completely changed my mind about the character, and Roddenberry's own acting abilities. Majel is sublime in the episode. She's passionate, fierce, and absolutely believable in her convictions against Timicin's planned suicide. It's great stuff, and she proves to be every bit as compelling on screen as Stier's Timicin.

The only other thing I'd add is, this episode marks the very first appearance of Michelle Forbes on TNG. She plays Timicin's daughter, Dara.

I'll nominate the Season 3 episode Hollow Pursuits, in which we're introduced to the neurotic Lieutenant Reginald Barclay and his penchant for holodeck fantasies.

Highlights of the episode without spoilers:

I've already posted a nomination, but am putting in an honorable mention for Q Who from Season 2.

This episode reminded me why I enjoyed Star Trek so much: