Should we change [harry-potter] to [potter-verse]?

Should we change harry-potter to potter-verse?

Remember the main purposes of tags:

I’m not sure this proposed tag change helps fulfill any of these purposes.

As for potential confusion with character tags, I think this is a non-issue. I’ve never heard of someone believing that they should only use the harry-potter tag for questions about Harry himself.

And of course, when it comes to it looking neater, that’s something of a matter of opinion. I personally think that, given that “Harry Potter” is the generally accepted name of the universe/franchise, it looks a whole lot neater. “Potterverse” is a somewhat ad-hoc coinage, and “Wizarding World of J.K. Rowling” is a mouthful, designed for advertising, and virtually unknown.

Based on our current usage, it makes sense to me to create potterverse as a synonym of harry-potter. I know I personally find it easy to think of it as the Potterverse than any of the other terms, but that term shouldn't supplant what's the most widely-used way of referring to that universe (see Adamant's answer). A synonym is a good compromise, as it complements the main tag by improving searches for the tag, and also when selecting the tag: 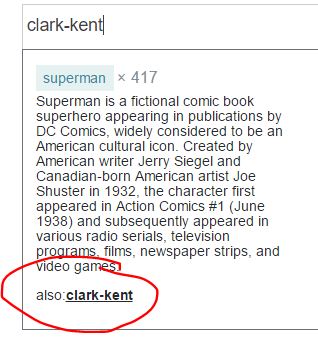 The nice "also: clark-kent" in this superman example shows that visually, you get a strong indicator that the synonym is how we refer to the universe here. So anyone accustomed to using the other term will see "Ah, his name stands for the whole thing." (a scenario that'd surely make Snape sneer with disdain for Potter's ego)

If for some reason we needed a tag specifically about Harry's character (and I really believe that we don't), we have the option of making a new tag, such as harry-james-potter to separate him out.

Not the answer you're looking for? Browse other questions tagged discussion tags .

19
When should character tags be created/recreated?
9
Harry Potter tag cleanup
-5
Do we want to create a new Wizarding World tag?

20
How should we handle tag hierarchies?
34
Will we ever clean up those ridiculous spoiler-free “The Force Awakens” question titles?
14
How do we actually use tags?
4
How should we tag Harry Potter questions about original media based on details from new media?
12
How should we tag Marvel and DC as a whole, considering how we've done so?
24
What's the best way to respectfully discuss stories which fictionalize religious subjects?
13
Should questions about Harry Potter and the Methods of Rationality have the harry-potter tag?
27
What should we do about suspected plagiarism of SFF.SE content on other websites?