Is it a bug when pending edits by myself appear near the review button?

I've recently proposed an edit for the ss-gb tag excerpt, after creating it. Some time after, the pending edit button appeared near the review queue button. When I clicked, the queue appeared empty, but the button remained there.

It still does, even after multiple clicks, as shown in the animation above.

Is this a known bug when my own edits appear as pending (given that I've already reviewed them by proposing them)?

No this is a known caching issue and status-bydesign.

Caching. And some complicated eligibility rules.

...But there are still some edge-cases where there'll be items in a queue that you aren't eligible to review but which are disqualified because of tests too expensive for the system to run until/unless you actually try to review them.

It's unlikely you'll encounter the latter very often, but if you see a discrepancy hanging around for more than 5-10 minutes, chances are that's what it is.

So what happened is, the topbar showed that a review was pending for the site to do. When you clicked it, System calculated your eligibility for the review and found out that you are not eligible for that review (Because it's your edit after all). So it showed you no pending edits.

Also see: Another one of Shog's answers here.

Further reading: Should I blame Caching?

Update: In the new design rolled out for SO, it appears that they have fixed this issue by getting rid of the count altogether. Now the counts load when you click on review button, for every queue respectively. 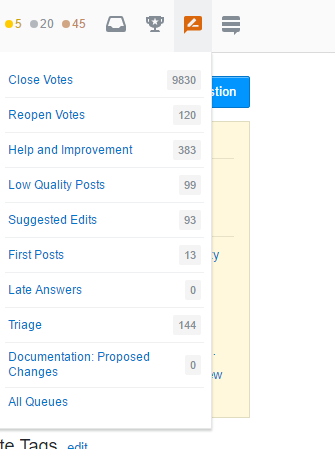 UPDATE 2: Yes Shog has confirmed the new layout is supposed to be the fix for this issue. Quoting him:

Well... It's a fix, @NSNoob. It ain't ideal; the ideal implementation would light up the indicator when - and only when - there are tasks that you need to do when you haven't been reviewing for a while. But it is an improvement: there's a delay, no bogus number, and a check for some reasonably-sane number of pending tasks.

Not the answer you're looking for? Browse other questions tagged bug suggested-edit .

4
Old review tool contradicts itself regarding the number of “first questions”
2
Why aren't my high voted questions showing up when I sort the questions page by votes?
1
Asked to review someone else's edits?
3
When I click on the new 'About Us' link in the help down drop menu, it gives me a page not found
8
White background covering up the stars background when viewing a question