Should we accept “Word of God” type answers from users claiming to be Authors/Producers of a franchise? [duplicate]

I noticed an answer where a person claimed to be Writer and Director of a franchise.

If the answer had provided canon evidence, then of course it would have been a good answer regardless to who the person claims he is.

Knowing nothing about the said franchise, reading the answer it appears more to have been taken as The word of God.

When we look over to the metapost about the posts on SFF where we had professionals participate one can observe many such answers provided by the said professionals.

OTOH, We have this answer where it was confirmed that it was indeed the co-author who was answering.

There is a previous Meta Post on this subject where community seems to be divided equally on whether or not such answers be accepted prior to some verification that the person is really who they say they are.

Have we agreed on a policy here? Surely allowing such answers, which would otherwise be Downvoted or sent to the VLQ queue had the OP not claimed to be the author, can't be acceptable? As of now, If I go to unanswered questions of game-of-thrones, go to this question, whip up an answer and claim to be George R.R. Martin, should that be acceptable?

Mooz has shown us a way to verify the identity when he contacted the co-author of the book on this answer so it can be done in theory. 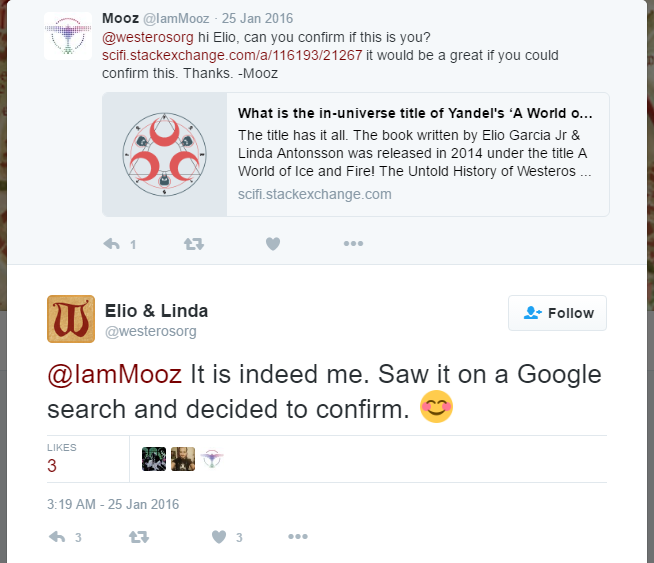 Note that I am not saying that we should start badgering people to prove their identity. Like the rest of us, they reserve the right of anonymity. But they are giving that up when they claim to be someone known to us as authority on the work in question.

Not to mention not all authors maintain a presence on twitter or other form of social media.

The purpose of this post is to get a consensus on the policy. Do we or Do we not allow the answers where answerers claim to be the authors and do not provide any evidence proving their answers?

(Note, answers! Not their identity itself. If the ID is confirmed, no evidence is needed anyways as in the case of the question where Mooz confirmed the identity).

13
Should we assume celebrity users are who they say they are?
65
Have we had ANY professionals participate in SFF?
18
What kind of proof is necessary when someone claims to be one of the creators of some work?

4
Annotation repositories
12
How to comment on “There is no in-universe answer”/“plot hole” answers lacking any evidence?
21
How should we handle tag hierarchies?
24
Should questions about future works be closed as Primarily Opinion Based?
20
Is a facetious comment sufficient evidence of voting irregularities to justify a suspension?
12
Quoting personal insider knowledge of production for an answer
13
Are answers that state “We Don't Know” acceptable?
9
Are analogies acceptable as answers?
16
How can I easily follow all works by an author?
26
Is it reasonable to downvote answers based on opposition to the question?