Why did a moderator delete this question about a paradox?

What story has someone step on a butterfly in the past and change the future, and what is that effect called?

I can see some reasons for it to be closed (as 'Too Broad', per @Mike's comment). But what was so awful about it that a moderator felt that it needed to be deleted? 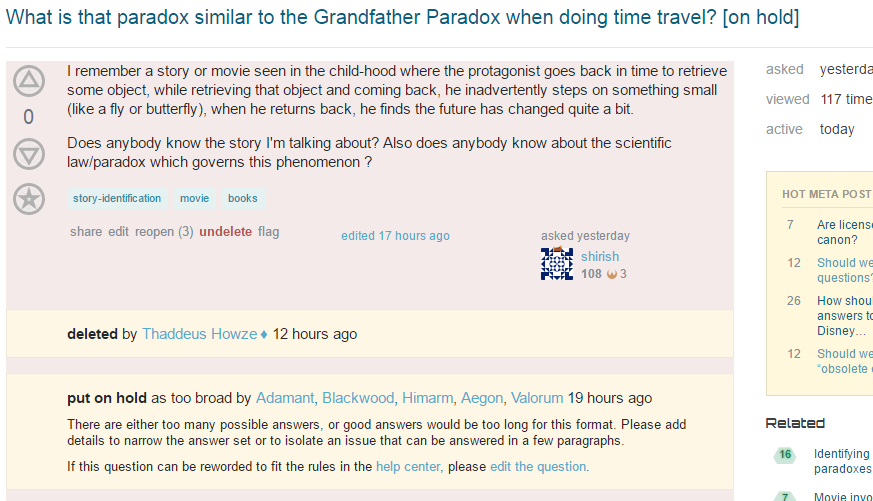 The question has now been mod-hammered open by moderator Thaddeus Howze.

The question, having initially been deleted by moderator Thaddeus Howze, has now been undeleted by another moderator, Kevin.

As yet there has been no explanation from either mod to justify the initial deletion, nor the decision to undelete.

This question should not have been deleted.

A brief look at the timeline and edit history would suggest that the OP, not having read the tour (I'm scowling at you, OP) posted a meandering question that was actually in three parts. Two of these questions were story identification questions, the third was a more general "What is this kind of paradox called?" question. It was rightly closed as 'Too Broad' because it doesn't have a single coherent question.

The OP then made an edit to remove one of the story-ident elements leaving two questions, one about paradoxes in fiction, the other a story-ident question. For some reason, the question then began attracting reopen votes.

At this point a moderator deleted the question. I'm unsure why they took this action but since the question is neither unsalvageable (a very quick edit would remove one of the questions), nor contains inappropriate language there really isn't a good reason to delete an already closed question, one that the OP is in the process of fixing.

Talking as the guilty party in the question, I had seen/read two or more stories which seemed to have a similar trope. Now I was handicapped because I knew what the trope is about but didn't know what it is called. To add to that, as I had read/seen those stories/movies far apart I wasn't able to fully remember the details.

So now, I'm in a fix how to describe the trope as well as how to figure about those stories as for me they both went hand-to-hand. I didn't mind the fact that I got hammered but was much more excited and thrilled as I learnt two-three similar tropes which are used in science fiction. For e.g. the "timeline split plus butterfly effect" and the other points raised by Lserni were really cool.

As far as the tour is concerned, I took it twice and the ones it is at the fence are about -

a. List of works with a particular plot element

b. Or any other question with too many possible answers or that would require an extremely long answer

Now as a questionaire, sometimes it makes it pretty difficult to know which questions are broad and which aren't. One of the things that the site tour doesn't tell or cherish is "Assume good faith" . If this was part of the tour then it wouldn't have caused as much heartburn as it did to both sides.

I was one of the people who originally voted to close the question as "too broad". I did so because it was asking for the name of a movie, and the only identifying information provided was that it featured a rather common sci fi trope. In other words it seemed to me to be too broad.

Not the answer you're looking for? Browse other questions tagged discussion specific-question moderation deleted-questions .

3
Why has this question been deleted?