If I see a bad post, should I flag, vote to delete, downvote, all of the above?

Occasionally you'll come upon a bad answer, not a willfully bad one, but often just one where they say "Hey, I'm looking for that one too!" or "Thanks for answering that, FuzzyBoots. I was looking for that too!". Clearly, these items should be flagged as "Not an answer". Should I also click on "delete" as well? Downvote?

And does the answer change at all for willfully bad posts such as spam or joke answers?

Downvotes are somewhat less useful, especially if it's a 1-rep user or an unambiguously bad post1, but I still encourage you to do it, and absolutely flag and vote-to-delete (if you have that privilege). It only takes three delete votes from 20k+ users to get rid of a post, so the sooner you cast a vote the sooner it's gone.

The main moderation benefit to downvoting, as a 20k+ user, is that it allows you to immediately vote to delete answers2; otherwise you have to wait for it to show up in the Low Quality Posts review queue. So, for answers at least, that would be a compelling reason to downvote.

Spam and abuse flags are slightly special in that enough of them, from users of any reputation level (with the privilege to flag, obviously) will automatically delete the post. It goes without saying that, if the flag is warranted, this is the fastest way to get rid of it.

However, it's probably not a good idea to vote-to-delete these posts, because posts that get auto-deleted through this mechanism are automatically locked, so it can't be edited or nominated for undeletion. Although this is a bit of an edge case, it does help mitigate the risk of disgruntled 10k+ or 20k+ user(s) undeleting a bunch of old garbage. I'm not entirely sure if that still happens if the post is deleted by user votes, but personally I'd rather not risk it.

I should mention that there might be an another reason not to vote-to-delete something that you've flagged as spam or abuse. Spam/abuse flags result in certain data being fed into some behind-the-scenes tooling, but it's not clear whether that happens only if the post is auto-deleted (as a result of six spam flags/one moderator spam flag) or if it just requires a valid spam flag (you can see Rand al'Thor and I discussing this in comments).

1 I should clarify what I mean here. Downvotes are the community's way of expressing displeasure with a post; it accomplishes this in four ways:

These are all valuable things, so don't take this as me telling you not to bother voting. However, I would argue that the benefits of downvoting are diminished when it comes to posts that are obviously going to be deleted; because the post is going to be completely removed from the view of most users, there's relatively little benefit in visually differentiating it from other posts, so points 2 and 3 above still apply, but the utility is lessened.

In the case of a post by a 1-rep user, points 2 and 3 still apply but 1 does not; 1-rep users receive no reputation penalties whatsoever.

2 Unless the post already had upvotes. This is an occasional problem, much as I wish it wasn't

On the subject of "joke answers", it's always important to remember the guiding principle of Stack Exchange, that 'We Hate Fun'™ 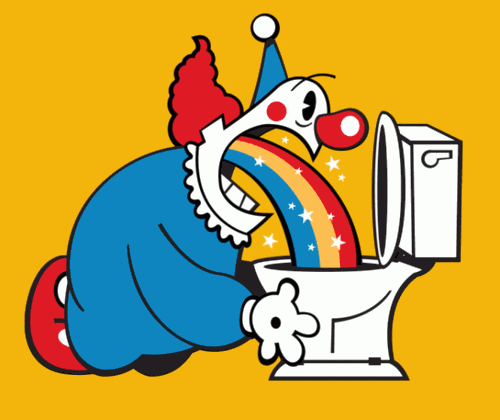 That isn't to say that an answer has to be boring (indeed, some of my most highly upvoted answers contain a strong element of humour) but like the mullet, it has to be "business at the front, party at the back", tempering fun with actually being a solid answer to the question asked.

If you see an answer that is purely funny, congratulate the poster on being droll, then downvote, flag as 'not an answer' and click the delete button.

19
Let's talk about handling spam or rude/abusive posts
-9
Can someone tell why this flag was declined?

6
Should high-rep users vote to delete bad closed questions?
5
Is it acceptable to provide poor answers to your own Story-ID question?
4
What does "protecting" a post do?
6
Why was this answer to the question of Hermione's ethnicity deleted?
18
Proposal to modify the policy on answers that cite religious texts
19
Can I add a note to my own incorrect story ID answer, explaining why it is incorrect?
14
Do we want Smoke Detector to auto flag spam?